It Was Never Simple

by Bruce Hainley with TSC 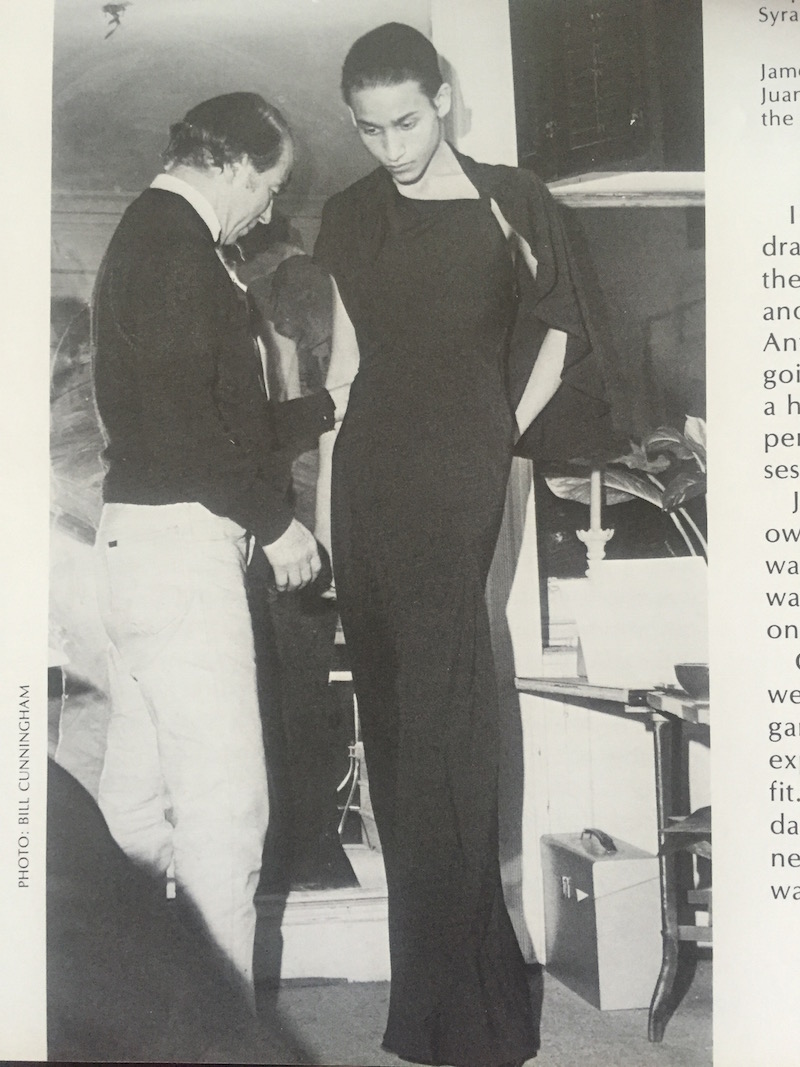 Bill Cunningham’s document of Charles James with model Juan Hernandez, rather than exposing any certainty about so-called identity, demonstrates a few of the nacreous, late-night negotiations of desire and difference.

Cunningham was first ensorcelled by the “magic spell cast by Charles James’s work…on opening night of the Metropolitan Opera in 1948,” when, “as in a dream, there appeared on the grand staircase three women gowned and jeweled in ceremonial magnificence, like exotic birds from an enchanted forest”—Mrs. Cornelius Vanderbilt Whitney, opera singer Risë Stevens, and the actress Gypsy Rose Lee.

The gentlemen might be in the process of embodying (to manhandle Foucault’s parsing of kinds of knowledge) a few of the conditions necessary in a particular period for a type of…exchange (let’s call it) to be given to connaissance in order for a type of enunciation to be formulated. Or they might be about to dance.

Some accounts claim the document was made within hours of the assassination of Martin Luther King, Jr., in other words, circa April 1968, but if this were so does the knowledge allow us to understand how some proleptic mourning clings to the scene, just as jet silk cherishes Juan Hernandez’s perfection of torso, or trouble things with reference to something outside the frame — perhaps the only kind of fact, a wise friend declared, that should ever be cited?

Don’t confuse any Nina Simonesque seriousness for joylessness, or ignore the post-May ’68 upheaval in production for the soigné draping, skilled hand at faultless hip.

Bill Cunningham’s own account of the modeling session—organized as one of the “seminars” during which Antonio Lopez recorded, in vivid drawings, James’s masterpieces (a “major project, often pursued with great intensity over a period of ten years”)—makes no mention of the assassination but rather of the assignation of the model: “I remember vividly at 2:00 A.M. during one of the drawing sessions Charles became exasperated by the female model’s hips and buttocks, which bulged and distorted the line of a slender black 1929 gown. Antonio quietly left the studio on the pretext of going for coffee. He returned from 23rd Street with a handsome, straw-thin young man whose body fit perfectly into the sinuous gown—and the drawing session went on at an inspired pace.”

Culture (cf. Avital Ronell) transpires under the pretext of “going for coffee”; bespoke aesthetic action continues, as it always has, and il n’y a pas de hors-texte.

During a sojourn at the Everard Baths, when James “draped his sheet into a 1913 hobble skirt, to the wordless amusement of his friends,” was Bill Cunningham one of those present?

He was no stranger to partying — or its potential aftermaths. Observe how Cunningham smiled on how James, if he “thought the request sincere,” lent garments from his collection, despite their frequent bruised return from wild disco nights, so students and friends could “experience firsthand the wearing of his shapes and fit”: “Once Antonio and his model were allowed to wear the celebrated 1937 white satin quilted jacket. James was thrilled when Antonio returned the jacket with a series of photographs. He had put the coat over the bare-chested, muscle-sculpted body of a soccer player astride a shiny Harley Davidson motorcycle. James’s feminine opera jacket placed in the saddle of the giant machine had the fantasy effect of a space-age warrior.”

Consider the pictures and negatives housed in Cunningham’s vast archive, the project of an alert historian: although detailing the populaire as well as forms of knowledge and eroticism, among other things, it secures a Venn diagram of the corresponding elements of the marvelous and private — in the eclipse not only of privacy but also of discretion.

Woe will be the malapportionment, for profit, from smallness of mind (or both), of Cunningham’s archive — the contents of which, like Atget’s, have an itinerary different than art’s.

Cunningham’s life and work (his French street-sweeper blue cotton work jacket, with all its convenient, parenthetical pockets, remains a gentle but searching essay on culture and labor), keeping in mind Atget’s insistence that the pictures he produced (not unlike Cunningham’s own) were documents, useful, not art (cf. Molly Nesbit), how to explain this feeling yet again (not quite malaise, melancholy, agnosticism, or resignation), now in light of Cunningham’s death, that with almost everything relentlessly seen from the vantage or valuation of art, there is actually very little art.

Thelma Ritter, cast to portray such a mood, would leaven its tetchy quandary with her special yeast of wry aplomb.

“Imagine the forgotten as an ever-expanding solar system,” Thelma instructs, undoing the gown from Juan Hernandez with lesbian precision, hanging it in the closet, shushing Antonio Lopez and Juan Ramos, who were also at hand in James’s tiny Chelsea Hotel atelier/apartment when Cunningham did his thing, before continuing, “existing without us, literally without our knowledge, what is forgotten and unknown overwhelming what it is known and remembered, with perhaps galactic force — and yet there is a kind of work which is a stay against such oblivion.”

Fashion is, he stated, the armor to survive the reality of everyday life.

But then again—I only know how to have fun every day—he brushed away any idea that he ever worked at all.

Bill Cunningham, “The Man,” in The Genius of Charles James (New York: Holt, Rinehart, and Winston, 1982).