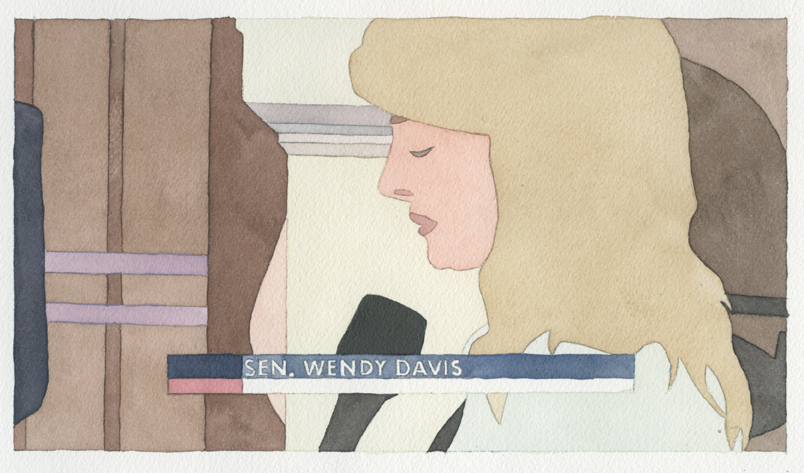 Filibuster is a watercolor animation and the frame-by-frame re-creation of the video footage documenting Texas State Senator Wendy Davis’s eleven-hour speech in front of the Texas State Senate in 2013. With this monumental filibuster, which spread virally online as it happened, Sen. Davis attempted to prevent the law chamber from passing legislation that would practically ban abortion services across the entire state.

The animation process will require painting approximately 475,200 individual watercolor frames that together will make an animated video with the same duration as Davis’s speech. Hiring animation assistants to produce the paintings in a time frame of two to three years would cost more than the annual operating budget of several art spaces combined. If I made all the paintings myself, it would keep me busy for the rest of my life and beyond.

Even though the realization of this project seems thoroughly inconceivable, I feel enticed to make it happen. I imagine the project could become a companion to some of my favorite art films, which all share the quality of being “too long,” like Andy Warhol’s Empire, Douglas Gordon’s 24 Hour Psycho, or Christian Marclay’s The Clock. Additionally, I think this film could extend the meaning of “filibuster” from an obstructive, legislative maneuver to one that addresses cinema — this is a film that literally blocks the screen — and myself, as it’d prevent me from doing any more art.