Crying on Camera: “fourth-wave feminism" and the threat of commodification 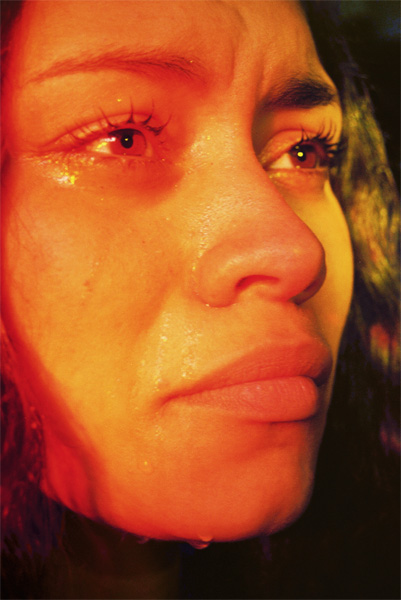 Carly Rae Jepsen’s recent music video for “Boy Problems” doesn’t have any boys in it. The thirty-year-old singer sits crying in a dimly lit bedroom decorated to a high-school girl’s liking, wearing a tiara and black spaghetti-strap dress fit for prom night. Embellished by artificial twinkles, she sings I think I broke up with my boyfriend today/ But I don’t really care/ I’ve got worse problems, and takes selfies on a pink tablet decorated with stickers shaped like broken hearts.

The video, which turns into a soft-pink slumber party flush with Instagram-famous attendees (think Rookie Mag’s Tavi Gevinson and all the young women who orbit her) is acutely on trend for its audience — so much so that it almost feels like a parody of Millennial notions of feminism, exaggerating the extent to which “girly” has come to equal “empowered” in popular culture. That subtle self-awareness is an indication that perhaps we’ve reached a point at which young women’s idea of female empowerment can be achieved through an aesthetic formula — one that champions feelings, insecurity, social media, selfies, and all things typically used to prove that young women are irrational, unintelligent, and self-obsessed.

The director who brought together the Jepsen party is twenty-three-year-old New York City photographer Petra Collins, for whom that cast could also be considered a girl squad. Collins, who grew up in Toronto, began photographing when she was fifteen. She turned her lens on her younger sister and her friends, training her eye to capture moments of vulnerability — second-long scene changes hidden throughout the ongoing performance that is girlhood. She’s been incredibly prolific ever since, and has become an icon for an emerging movement of young women celebrating female identity on social media and owning the experiences particular to girls who have grown up on the internet.

Jepsen’s video premiered the first week of April; the same week that Collins’ solo show, 24 Hour Psycho, opened at Ever Gold Gallery in San Francisco. In the tiny Tenderloin storefront, wall-length, close-up portraits of crying girls towered above a young audience. Each face was washed in soft hues of yellow, purple, blue, and red, resembling the glow of neon signage. The body of work is titled “So Sad Today Series” — presumably a reference to Melissa Broder’s Twitter account, which is dedicated to the anxieties that come with being female in a digital age.

A few days after the opening, Collins took the stage at the Yerba Buena Center for the Arts to be interviewed by San Francisco Art Institute professor Nicole Archer. She described how, to create the work, she held a slumber party with a group of teenaged female friends at one of the girls’ homes and sat in a circle sharing feelings. “As soon as one of them starts to cry, it snowballs from there,” she explained. The girls took turns holding LED lights and being photographed.

With the series, Collins aims to reclaim the notion of female hysteria and subvert the assumption that women’s emotions are a sign of weakness by depicting her imposing subjects in states of distress that are also expressions of agency. The curatorial statement quotes artist Audrey Wollen explaining her “Sad Girl Theory” in the 2015 Dazed interview that launched a thousand crying selfies: “Girls’ sadness is not passive, self-involved, or shallow; it is a gesture of liberation, it is articulate and informed, it is a way of reclaiming agency over our bodies, identities, and lives.”

That Dazed interview is one of many online articles that have, over the past few years, contributed to the popular understanding of “fourth-wave feminism” — basically, a reiteration of third-wave feminism that takes into account the experiences of “digital natives” and the extent to which online platforms provide space for promoting gender equality. It’s a form of feminism that appreciates the complicated intersectionality of Beyoncé’s LEMONADE, but ultimately finds itself in a camp more particular to Millennials (and less so to black and brown experience).

In 2013, a slew of think-pieces introduced what has come to be known as “selfie feminism” into the popular consciousness, arguing that selfies are empowering because they reclaim the male gaze by allowing women to flip their own gaze onto themselves and let it be publicly known that they’re doing so. By explicitly and publicly “feelin’ themselves,” women could work to erode the oppressive notion that female confidence is narcissistic and arrogant; the key to unlocking empowerment, in other words, was online visibility.

Since then, the selfie debate has been ongoing, extending to every realm of the cultural sphere — from Kim Kardashian to Richard Prince. Of the many critiques that quickly followed in its wake, Aria Dean’s “Closing the Loop,” published on The New Inquiry in March, is among the most eloquent. Dean argues that, with help from media platforms like Dazed and i-D, “selfie feminism” has fallen into popular approval and become tailored to normative tastes along the way, now favoring whiteness, slenderness, and all the other qualifications it was initially intended to resist. “Time passed and the selfie’s more general life- and difference-affirming politic — which had previously allowed for a wide variety of non-normative identities to circulate and receive validation on user-driven platforms like Tumblr and Instagram — whittled itself down to its most palatable iteration,” Dean writes. “…this selfie feminism has taken hold of and become the mainstream.”

Meanwhile, algorithms on social media work to ensure that top posts and mainstream tastes mutually mimic each other by further promoting images with the most likes. And what underlies this “like economy” is actual economics — the fact that social media platforms are corporations and users their unpaid content creators. 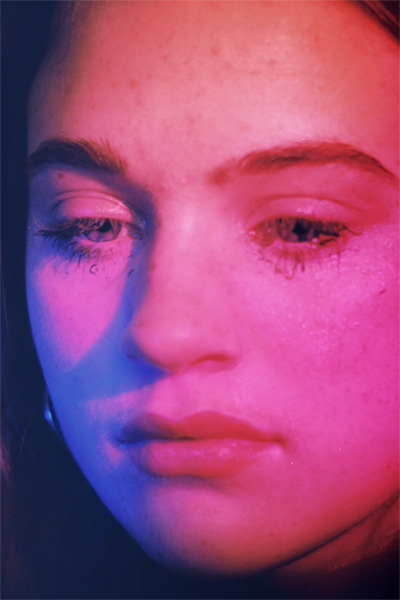 In a talk given at the 2015 Superscript conference held at the Walker Art Center, The New Inquiry editor-in-chief Ayesha Siddiqi expressed her concern regarding this reality. While acknowledging the importance of the volume and visibility that online platforms afford typically marginalized communities, she also asserted that, for social media corporations, online communities are a commodity and the social movements that rely on them are totally and unavoidably vulnerable to their mediation and surveillance. On Instagram, for example, that often manifests in direct censorship that specifically targets women, literally limiting the visibility of their bodies and confining expression to the company’s terms of use.

But female empowerment — or at least some illusion of it — is undeniably on trend in American popular culture. It’s in everything from Rihanna’s man-killing music videos to the new line of differently-sized Barbies to Hillary Clinton’s #ImWithHer hashtag. In many ways, it’s a massive triumph for American women to be able to enjoy these generally positive depictions of womanhood and girlhood (not to say that those representations even begin to overwhelm the mass of harmful depictions that persist). But that popularity also means that we’ve arrived at a moment in which commercial tactics can easily be made to look like a form of feminist resistance.

Siddiqi points out that the same visibility that has led users to consider social media platforms “bastions of democracy” enables their corporate owners to co-opt notions of “cool” put forth by a progressive vanguard in order to better advertise to that vanguard, insidiously drawing them further into the capitalist system that is, in part, responsible for their oppression in the first place.

Playboy, a publication that has for decades served as a quintessential example of female objectification, recently did away with nudity in an explicit attempt to better appeal to a Millennial readership. The magazine’s first-ever cover featuring a clothed model — who is not coincidentally a social media starlet named Sarah McDaniel — inserts an interesting riddle into the conversation. The image is explicitly styled to appear as if the model took the photo as a flirtatious Snapchat selfie — a women being supposedly empowered by reclaiming the male gaze, presented for a male audience to feast on. If normative male taste is beginning to align with female agency, that’s got to be a good thing, right? But the cover is also a useful case study for questioning whether reclaiming the gaze is as easy as a selfie in a world where capitalism and patriarchy are intimately intertwined. At what point is “female empowerment” simply being sold back to us as a cheap copy of the intended outcome? 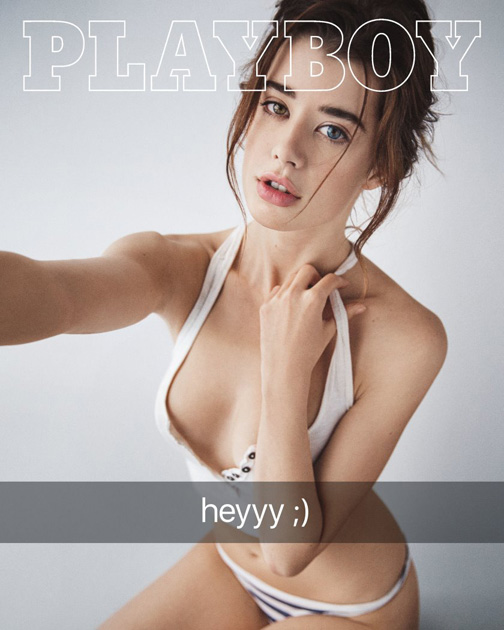 Petra Collins seems keenly aware of this question. During her Yerba Buena appearance, she was eager to address the notion of selling out — something that she’s been accused of because she collaborates with major brands on photo-spreads in publications such as Vogue. She shared the perspective that an artist has to eat, and young artists shouldn’t be ashamed of doing commercial work because that’s the only realistic way to make a living. She described ways that she’s been able to put pressure on the fashion industry to be more inclusive — how she’s insisted on doing her own casting and refuses to only cast the typical white, skinny model (which happens to be her own appearance).

Then she showed a short film that Adidas had recently commissioned her to make with full artistic freedom, presenting it as an example of a mutually beneficial commercial collaboration.

In the beautifully composed short, three high school athletes, all the while sweating in Adidas workout gear, describe challenges they’ve faced in sports because of being female and how they have persevered. The actresses’ physiques are relatively easy to identify with, the stories are relatable (and all true), and the clothes look great.

Still, some audience members were skeptical. During the Q&A, one person asked Collins directly whether she felt that female empowerment was becoming commodifiable. Her response: “When you’re just trying to sell something by faking empowerment, that’s when it’s negative, but if you’re paying the girls you’re talking about, that’s when it’s powerful.”

It’s an answer that deserves and requires endless unpacking. Every step of the way, we must continue to ask: Who is getting paid? (I asked Collins’s gallery reps how much her Adidas models were paid, but received no response.) But that conversation begs other, crucial questions. To what extent should “empowerment” manifest tangibly in monetary gain — or can it at all? And for that to happen, must expressions of empowerment be limited to an aesthetic arena defined by corporate agendas?

Alarmingly, Collins seems unfazed by the potential for fourth-wave feminism to be consumed by capitalism. “We live in an increasingly consumption-based and image-heavy world. I don’t think that’s something that we can or should fight, but we should try to integrate different narratives and ideas,” she said in this month’s issue of Artforum. “Commercials are public art.”

And art is business. After the talk, audience member’s lined up to buy signed newsprint catalogues from Collins’ show — $20 a pop. But before everyone left their seats, the artist flipped around her iPhone camera.

It was time for a selfie with the crowd.