A few times a season, we like to reach out to a current or former Open Space contributor and find out what they’ve been up to. Writer and curator Bean Gilsdorf is a guest contributor, and published work here in 2014.

So, Bean, what have you been up to lately? 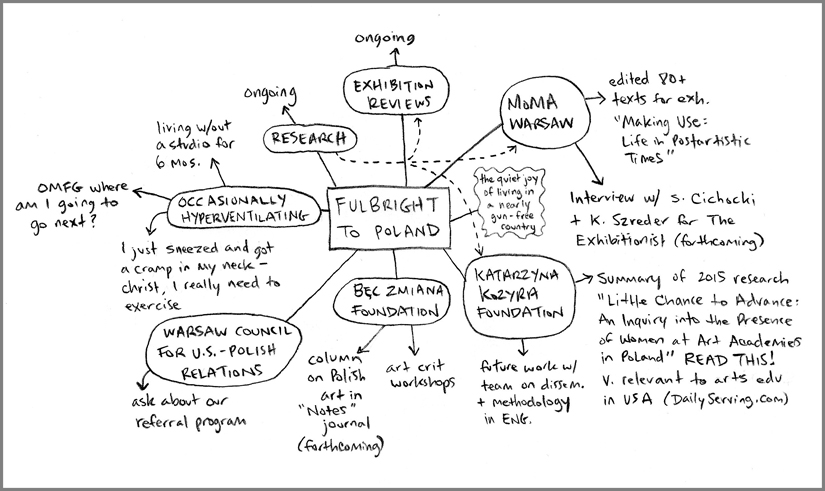 Over the last six months, a very good friend was concentrating on putting together a solo show in SF, and we spent a lot of time on Skype together, talking about his ideas, reviewing various texts for the exhibition, hashing out all the details. Mostly I just listened, and was again reminded that having a fellow artist — one that you admire, especially — trust you with their half-baked notions and full-baked doubts is both heartening and galvanizing.

Last year, you and Joseph del Pesco collaborated on a critique of the stARTup Art Fair. Given your current work as a Fulbright Fellow in Warsaw, can you provide any insight as to the similarities or differences between the socioeconomic dynamics of the art scene(s) there and those of West Coast?

One crucial difference is that, in Poland, an education equivalent to a bachelor’s or master’s degree in fine arts is free, so young artists don’t start their careers with crushing debt. However, in Warsaw as in San Francisco, many artists feel that there aren’t enough opportunities, that a small elite controls the scene, and that more favorable circumstances for an art career lie elsewhere.

Would you like to come up and see my etchings?

There’s a square in Warsaw named Trzech Krzyży and I think of this joke whenever I pass by: “A Polish guy goes for an eye exam. The doctor asks if he can read the eye chart: W K R Z S Y C H S Z Y N. ‘Read it?’ the guy says, ‘I know him!'”