The Museum of Transgender Hirstory & Art (MOTHA) is proud to announce that after many weeks of negotiations, SFMOMA has agreed to relinquish to us several artworks from its permanent collection that are relevant to trans hirstory and to the art and artists that our institution showcases. This news comes right as SFMOMA reopens its doors, having undergone its own identity-affirming transformation.

For those who are not yet familiar with the institution, MOTHA was launched in June 2013 at a symbolic ribbon-cutting ceremony that took place at Yerba Buena Center for the Arts. Since then, MOTHA has existed in iterations all over the United States, including Los Angeles, Chicago, New York, and even the small gay beach community of Cherry Grove, Fire Island.

The museum’s staff is very busy. We are currently focused on a project inspired by the British Museum’s exhibition and book, A History of the World in 100 Objects, and the Smithsonian’s act of patriotic one-upmanship, History of America in 101 Objects. MOTHA’s own project is called Trans Hirstory in 99 Objects (…and a cis ain’t one). The numerical modesty of the title indicates our recognition of the challenges and even impossibility of creating a cohesive history of our notoriously under-historicized community. The project will include not only a book and a series of exhibitions, but also a line of merchandise designed to cash in on today’s flash-in-the-pan fascination with all things trans.

We are now partnering with other arts and history institutions to begin the process of reclaiming images and art objects. After combing through SFMOMA’s collection, MOTHA staff has concluded that it contains many works that would really be more at home with us.

Most of these SFMOMA pieces, though not authored by trans artists, represent transgender people as subjects. This skewed dynamic has long persisted across art and media. Sadly, despite the recent boon of mass-media images of trans people on film and television, very rarely are the apparatuses of representation in our startlingly small or large hands. Faced with this historical and continuing fact, MOTHA has had to decide whether to dismiss or embrace these images as part of the trans art and hirstorical canon. In the end, MOTHA has decided to reclaim them. If trans people have for too long been denied the power to make images, then we will  simply take this art off cisgender folks’ hands.

Four artworks that MOTHA is acquiring from SFMOMA reimagine iconic cultural figures in some manner of cross-gender appearance:

Philippe Halsman’s Marilyn-Mao (made with Salvador Dalí) is an absurdist merging of two major cultural revolutionary icons, Marilyn Monroe and Mao Zedong. The photomontage suggests the possibility of politicized glamour: a glamorous revolution. It also makes hair recession a little more stylish, to the delight of many trans men. 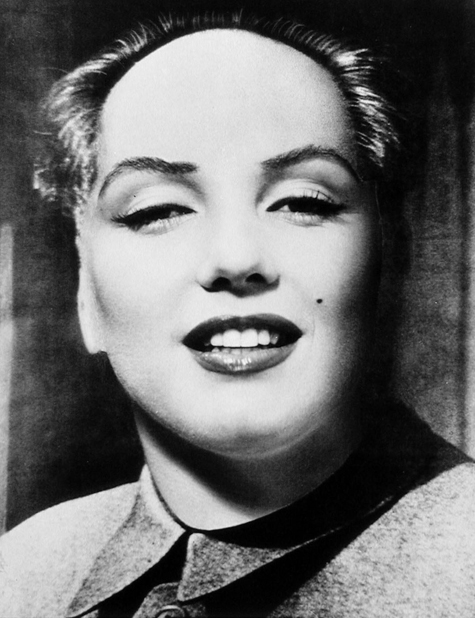 Glenn Ligon collaborated with schoolchildren at the start of the millennium in coloring in a 1970s coloring book of black leaders and revolutionaries. Apparently, many of the iconic figures were not as recognizable to the children as they might have been thirty years earlier. Malcolm X appears in full face, thereby reimagining a trans-inclusive and arguably more sickening black revolutionary movement of the last century. 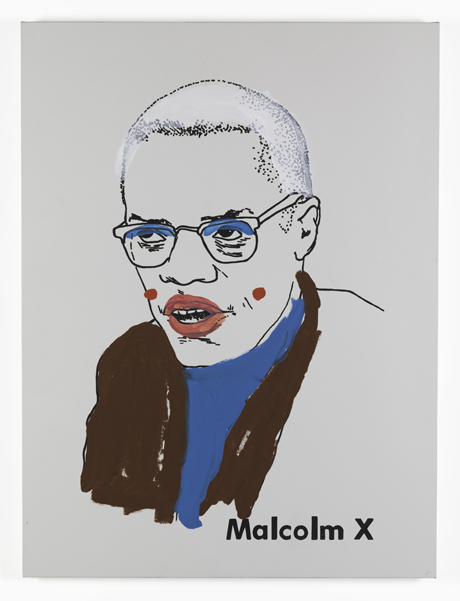 In An Inner Dialogue with Frida Kahlo (Collar of Thorns) and Self Portrait (Actress) Red Marilyn, Japanese artist Yasumasa Morimura inserts himself into the personas of art historical and pop cultural characters, and more specifically the personas of women overcome by tragedy. 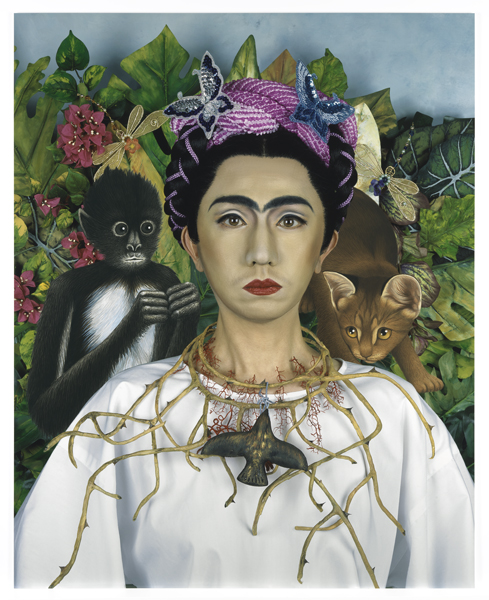 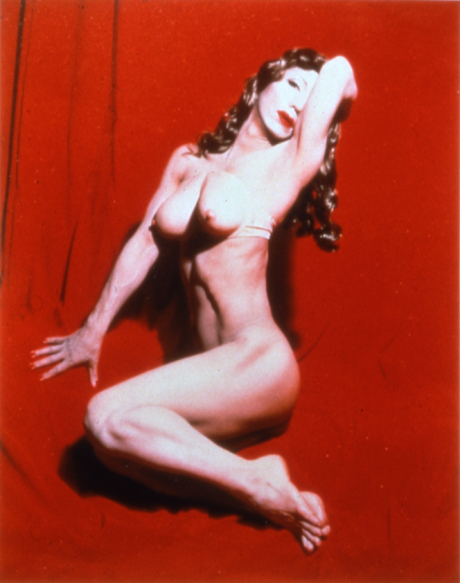 By troubling the genders of recognizable figures, each of these artists has created or inserted transness into a pop cultural history that did not always embrace us.

Most of the work MOTHA is repatriating is photographic. This is no accident. Not only do photographers love a transgender subject, but transgender people also love to photograph themselves, and others, continuously. However, this desire of trans people to document their own culture from within is not overly (or possibly at all) represented in SFMOMA’s collection. Instead, the images we found depict the range of relationships trans subjects have had with cisgender photographers. Robert Frank’s New York City shows a trio of street queens with varying responses to the photographer’s gawking camera: concealment, suspicion, and possible flirtation.  Variations on these three expressions can be seen in many photos of trans and gender nonconforming people. The iconic street photographer Weegee captured an all-too-familiar image of criminalized queer culture in Transvestite in Paddy Wagon, which can stand in for countless other images of queens being rounded up for defying anti cross-dressing ordinances and the other bummer laws that have made trans lives hard to live. 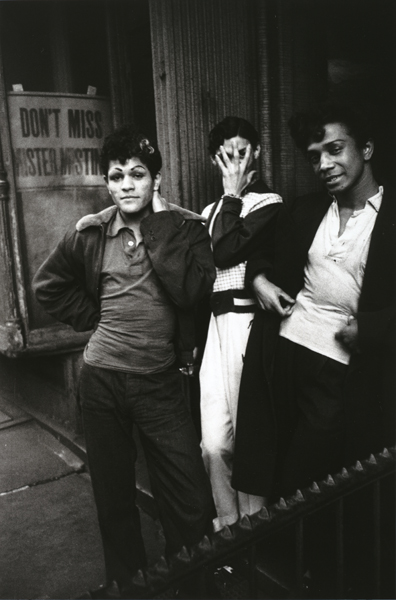 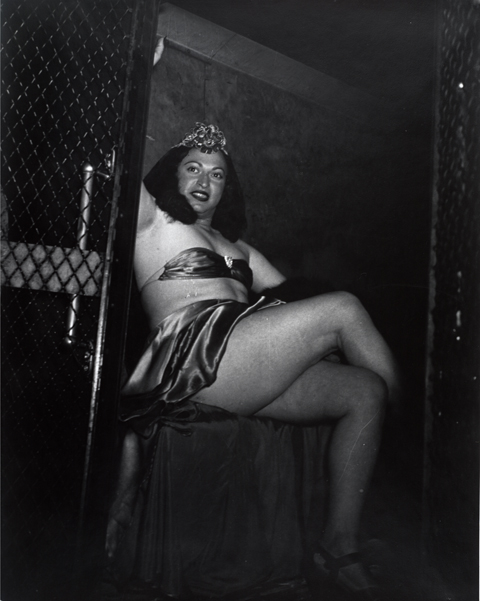 The Catacombs, 21 November 1967 is from a series taken by bouncer-turned-photographer Billy Monk at nightclubs in Cape Town, where he worked between 1967 and 1969. These images, made smack dab in the middle of South Africa’s fifty-year apartheid, document queer and interracial socializing, and the defiance that was made possible by and emanated out of nightclub and bar culture in the middle of the last century. 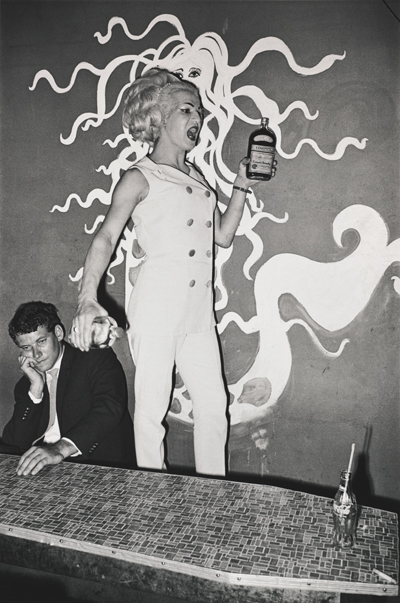 Marilyn, 28 years old, Las Vegas, Nevada $30 is a stunning portrait of another individual engaged in an underground, criminalized economy, this time of sex work. Philip-Lorca diCorcia’s photograph is taken from his Hustler series, which mainly portrays hustlers who read as cis men. The titles of the images disclose each subject’s first name, location, and the amount of money they charge for services, I guess in case the viewer is interested. That Marilyn is included in a mostly male series is troubling; MOTHA is doing a valuable editorial service to SFMOMA’s collection by removing her from this context. 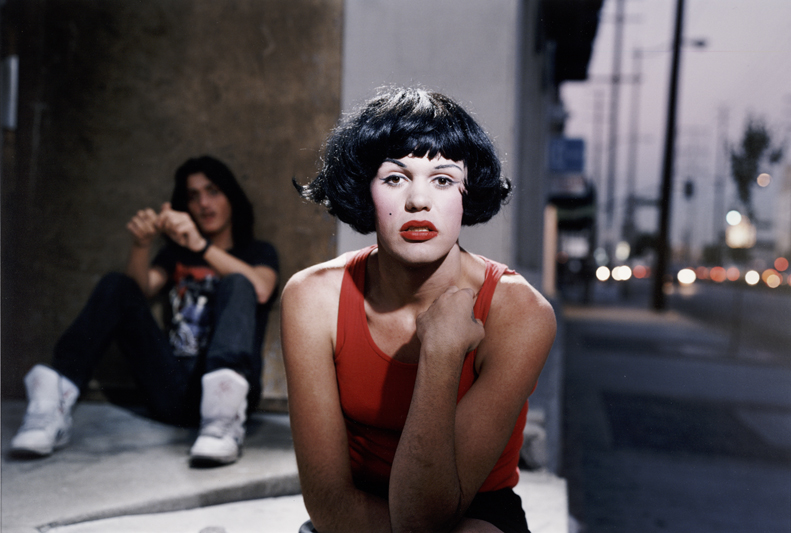 Jimmy Paulette on David’s Bike, NYC and Jimmy Paulette & Misty in a Taxi, NYC, both by Nan Goldin, stand out in relation to the others because they originate from within a queer subculture rather than from outside looking in. You can feel the familiarity between photographer and subjects in the casual everydayness of the snapshot-style images.  It’s widely known that Goldin was a notorious queen-chaser, and her close friendship with Jimmy Paulette is well documented throughout much of her work. 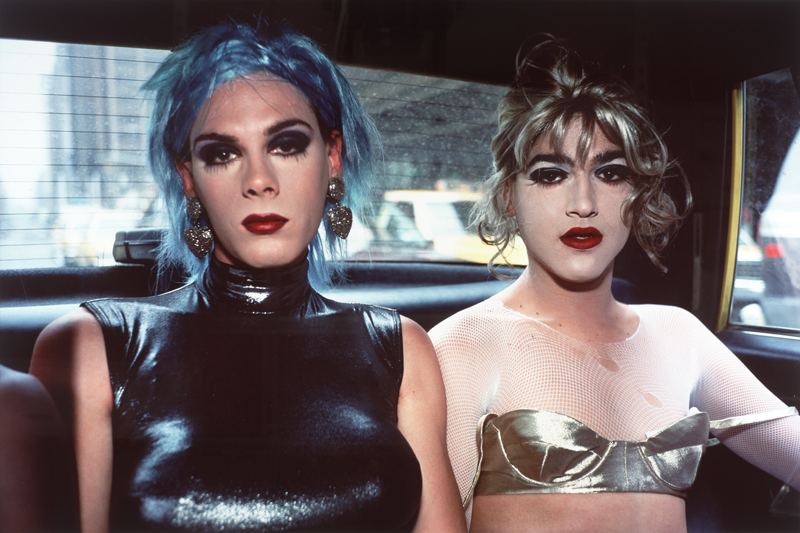 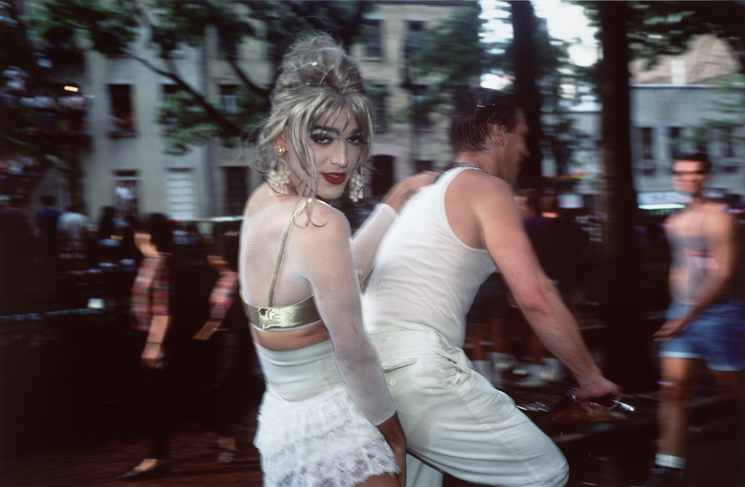 In the six photographs that comprise this section, the relationship between trans subject and non-trans photographer ranges from nonconsensual to fully participatory. Together, they chart a progression that stops just short of photographs of trans people made by trans-identified artists.

I’ll Be My Own Mirror

The final two images present two figures pictured with their reflections. Graciela Iturbide’s Magnolia is a portrait of an indigenous Zapotec person from the Isthmus Tehuantepec region in what is now known as southern Mexico. The subject is gazing up and outward while holding a mirror that reveals the far side of their face in profile, as if granting access to even more beauty than one limited vantage point could provide. In Untitled (Self-Portrait), Claude Cahun looks straight at the camera. In this way, the camera also becomes a mirror, albeit one with a more delayed gratification of narcissism. Both images speak to the trans or gender nonconforming subject’s self-aware and reflexive relationship to image creation, whether that image is made by another or oneself.

Putting the two images side by side speaks as well to the conflicted desire at the heart of MOTHA’s curatorial project. The museum seeks to illustrate that trans experiences and gender nonconformity exist cross-culturally and throughout time. However, the museum also recognizes that shoving all cases of trans and gender-nonconforming identity and experience under the same umbrella does a disservice to the ways histories, lives, and languages evolve, and to the myriad specificities that do not translate. 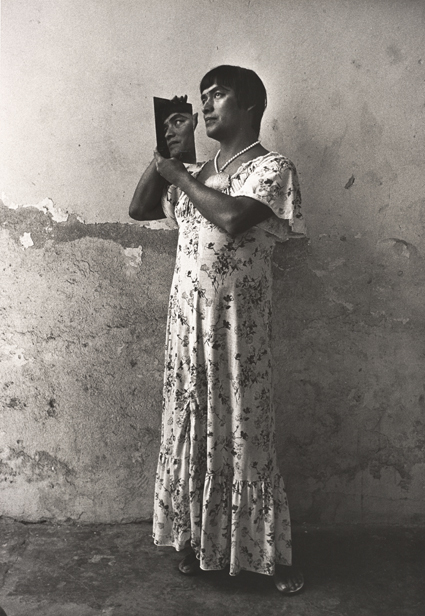 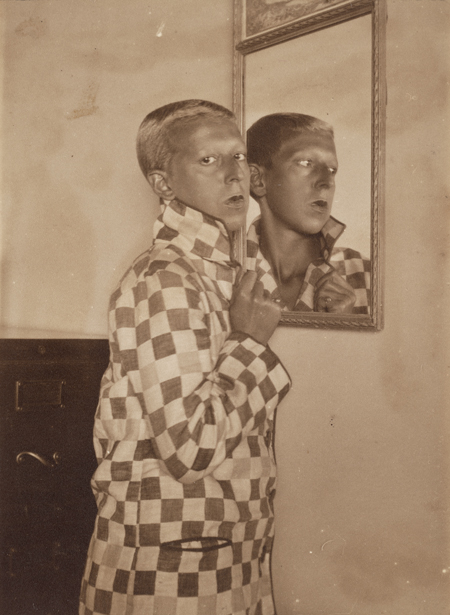 Although MOTHA was born three years ago with the snip of a six-inch-wide red ceremonial ribbon by a huge pair of novelty scissors, it remains, today, “under construction.” The process of building a museum and acquiring collections is a big undertaking requiring resources trans people are still struggling to access, along with healthcare, housing, and employment. Leading the list, of course, is a top-secret, temperature-controlled bunker 7.5 miles underground in which to store MOTHA’s growing and highly coveted collections.

The show projected for MOTHA’s grand opening will be a blockbuster. It will survey the history of trans and gender-nonconforming people in art, covering everything from “sensationalistic subject” to “empowered author.” The show will include newly acquired work by important established and emerging trans artists, alongside the above-mentioned pieces from SFMOMA’s permanent collection and work from other respected art and cultural institutions around the world.

Other museums be warned: MOTHA is evolving, and soon no collection will be safe from our Acquisitions & Repatriations Department — which we will establish any day now.