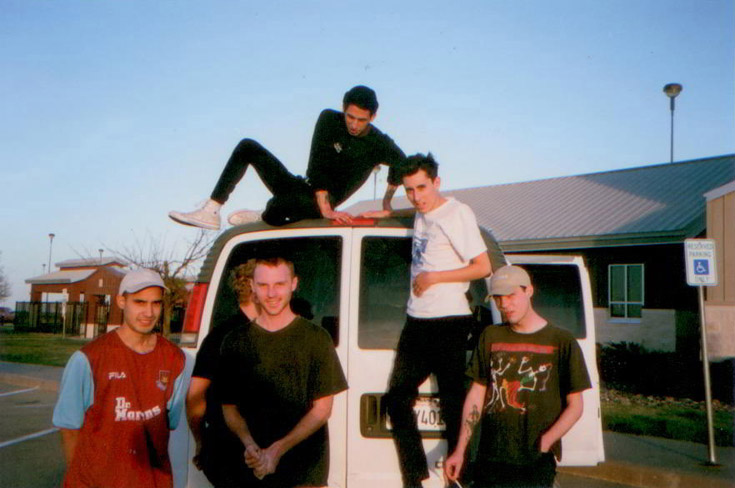 In the weeks before the thirtieth annual South by Southwest festival in Austin, Texas, music-industry Twitter teemed with collective commiseration. The analogy was war: an imminent “melee” requiring “armor” and “fortifications.” The shape and form of the enemy in all of the hyperbole seemed unclear, with publicists, journalists, and label operatives preparing to share the same bunker. But the role of infantry — skeptics and true believers among the ranks — was certainly played by bands.

One of them, Never Young, departed from Oakland on Friday, March 11th. The itinerary included gigs in Santa Cruz and Los Angeles; a two-day drive to Texas; gigs in Denton and San Antonio; and five shows in four days in Austin itself. The group let me tag along.

In the discovery narrative of SXSW — wherein emerging artists forgo compensation and comfort in order to forge connections at the music industry’s temporary center — Never Young appears poised and ready. A sturdy rock outfit with aggressive live presence and combustible recordings, the group boasts an eponymous 12-inch EP on a reputable label, a strong regional profile, and praise from many of the right media outlets. But like many industry participants, Never Young isn’t sure that discovery happens anymore — at least not in the seductively simple way it’s popularly imagined. 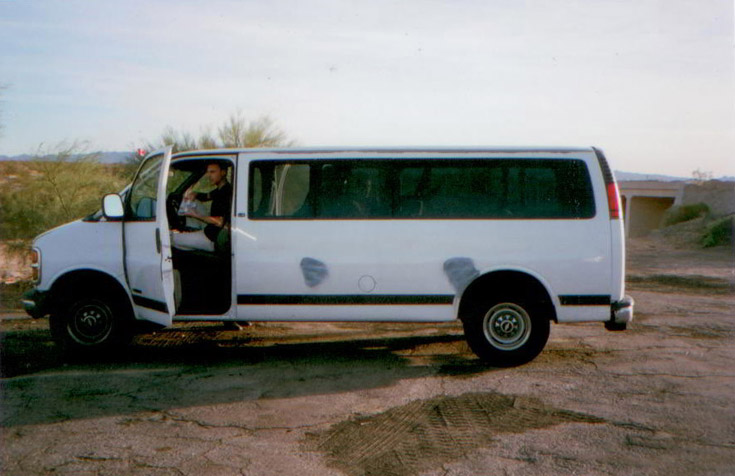 The fifteen-passenger van tended to misfire over eighty. Bassist Niko Escudero, 22, annotated The Communist Hypothesis and thumbed band cash, which lived in a denim pouch he’d sewn himself. Guitarists Nikolas Soelter and Christopher Adams, both 24, looked forward to scoring free Converse sneakers in Texas, a perk arranged by their manager, Jessi Frick at Father/Daughter Records. But the foursome, completed by another 22-year-old, drummer Samuelito Cruz, was mostly just excited to play with their friends’ bands, Weed from Vancouver, BC, and So Pitted from Seattle.

At the tour’s first show in Santa Cruz — a well-attended, free admission affair at a college bar — the booker summed up the tour’s financial outlook when, standing at the exit, he clutched a bucket and inflected a statement like a question: “No one wants to donate?”

Never Young didn’t envision a lucrative tour. Among new bands, it’s accepted that there’s little to no money to be made at SXSW. Still, proximity to power, now symbolized more so by the profusion of brands than the presence of major labels, remains key to the event’s allure. And our route to SXSW illustrated how that makes the festival a concentrated site of inequity in the entertainment industry at large, which perennially placates its underclass with tokens of luxury and moments of privileged access.

In Los Angeles, the group shot a music video with an old friend, Ramez Silyan. Through his work for the fashion company UNIF, he’d secured for the set a multi-story, midcentury modern home with a pool in the back and a Tesla in the driveway. The Angeleno crew chattered about attending a recent event for Saint Laurent, whose creative director, Hedi Slimane, is known for photographing waifish local musicians. And we were told by Silyan to mind the mansion pug, Nightmare, “the most valuable thing in the house,” who has more Instagram followers than our entourage combined.

The next morning, Soelter cracked his head open on a door fixture in the van. While he received staples in the emergency room, we waited in a shopping center near LAX, where we spotted the rapper-turned-venture capitalist Chamillionaire entering a sushi joint. That night, we stopped at a casino hotel outside Albuquerque, the six of us slinking into one room in separate groups. Ronald Langford, a friend of the band who’d come along, earned back his $15 portion of the nightly rate on the penny slots.

Another time zone change later, we were in Austin, where all week the weather was either balmy or cool and sometimes lightning etched logos in the sky.

SXSW occurs in and around a convention center, dozens of clubs plotted east of downtown, and a constellation of unconventional venues further out. When musicians mentioned beer brands from stage at official shows, it was difficult to tell whether or not they were shilling. At one unofficial show at a real venue, a band watched from stage as its van was towed. And at an unpermitted, generator-powered gig on a pedestrian bridge over the Colorado River at 2 a.m., the frontman of the Austin hardcore outfit Skeleton sneered, “it wouldn’t be South By without a product toss,” then flung copies of his band’s tape, I Hate I Skate, at a young, dour crowd. 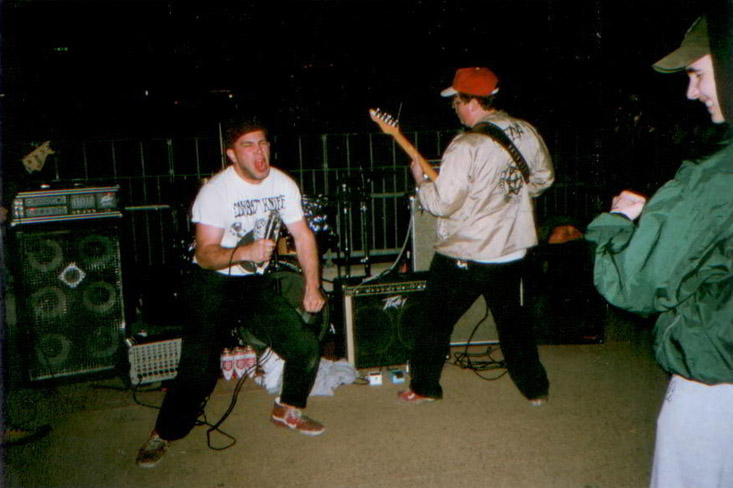 Gaudiness encroached on the rustic yet rapidly gentrifying city. Staff at Beerland, a scrappy venue downtown, wore shirts that read, “Don’t move here.” Locals worried that the event is supplanting traditional cultural institutions. Samsung sponsored a gig in a decommissioned post office, in case the erosion of the public trust wasn’t vivid enough. The best of Never Young’s shows (there were five in four days) were the most homespun, surreptitious events on the city’s margins that resembled underground shows back in Oakland. At House of Heck, in a living room lined by mattresses, Never Young’s set was consummate and inspired. As for forging connections, residents of these punk houses urged Never Young to return — at another time of the year.

Back on the main drag, despotic webcasters Spotify and Pandora hosted big tent events. The latter company, which is headquartered in Oakland, streams music by artists who, bound by federal oversight, cannot opt out of the service nor negotiate a more favorable rate, which Pandora aggressively lobbies to keep at a pittance ($0.0017 per spin, on the free tier). And Spotify, colluding with major record labels, is similarly mercenary. As the incisive Long Beach rapper Vince Staples grimly put it to the Spotify crowd: “I get an eighth of a penny every time y’all listen to one of my songs on Spotify, so thank you.”

With financial compensation increasingly elusive, many artists focus instead on accumulating social media capital. Call it the squad pic economy. And Never Young was pretty flush: cleverly directed skits shot on iPhones garnered hundreds of likes on Instagram and screenshots from Snapchat appeared on Facebook, inspiring exchanges on Twitter. Mornings, which began around noon in the living room of an acquaintance’s South Austin condo, involved trying to tie the cryptic handles of new followers to people we’d met the night before.

The brands of SXSW were keen to capture the value of Never Young’s social media clout, too. The group picked up free Converse gear and posed for photos in a private area attached to Fader Fort. Simply by entering the premises we gave tacit permission for Fader Fort, to record our likenesses for use in marketing materials — standard practice for most of the big sponsored venues. An advertising rep told Never Young that he liked their look and invited them to hit him up for free clothes anytime.

Later, as we prepared for the twenty-eight hour drive back to Oakland, Soelter looked up from his phone, smirked, and addressed the squad. “Okay, I’m posting this Converse photo and the guy wanted us to use the hashtag #readyformore, right?” He went on, “So I’m trying to add a list of like hundreds of things we want more of.” 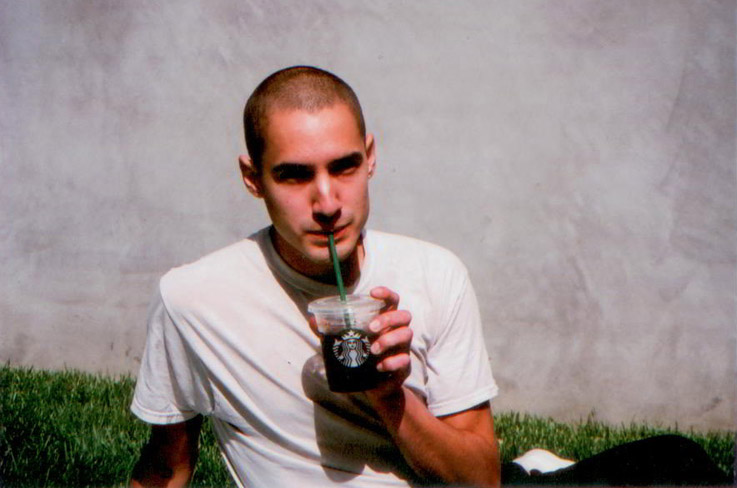