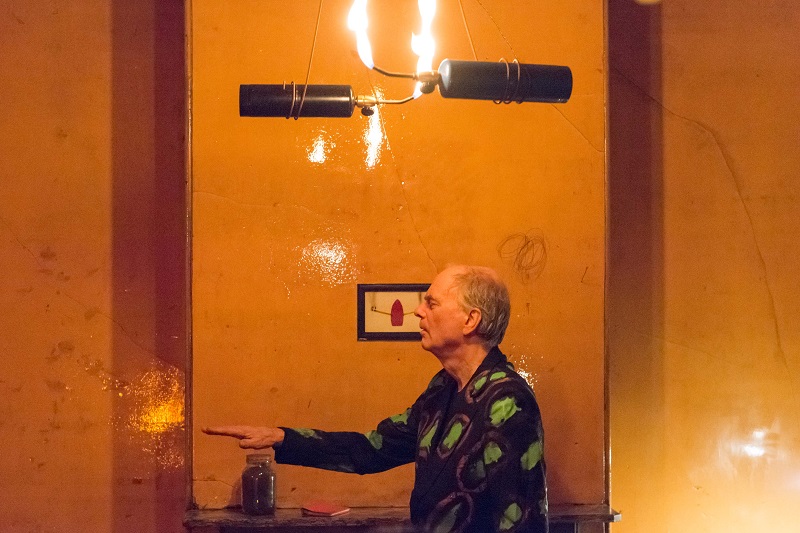 I walked there from SFMOMA, and I ended up taking Howard Street most of the way, which was kind of a mistake, given the already disoriented & disheveled state I was in in the days following my relocation (after 16 years!) from Brooklyn to Oakland. Rain-slicked Howard Street was dark, emptied-out, a little spooky… the kind of street that makes you feel lost.

But then again, I like dark, empty, and a little spooky.

As it turns out, the Ireland event wasn’t a tour at all, but an invitation for us to wander unguided through the rooms, lingering on their idiosyncrasies and particulars, which on this night included small blooms of movement by Douglas Dunn + Dancers.

Dunn, who was born in Palo Alto but has long lived in New York, collaborated with Ireland, and his geometrically severe, wryly gestural choreography looked absolutely at home within the stripped, oddity-studded house. The east-meets-westness of this felt perfect as a beginning-to-arrive event.

So. Maybe by now I have arrived. Have I? There is so much to wrap my head around, which is a big part of why I said yes to this job. And also: Suzanne Stein, you guys. I mean, who wouldn’t want to slip into a social sculpture that she, and you all, made, and are making? I’ll do my best to only mess it up in good ways.