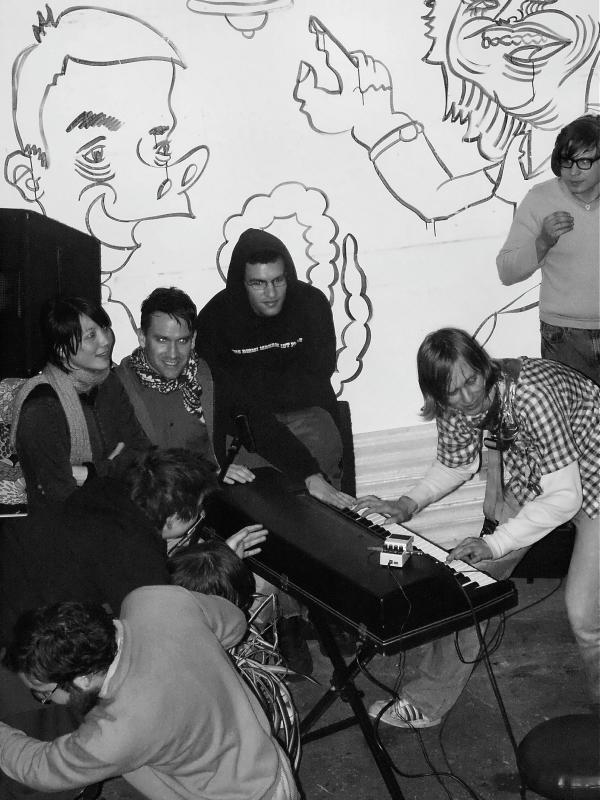 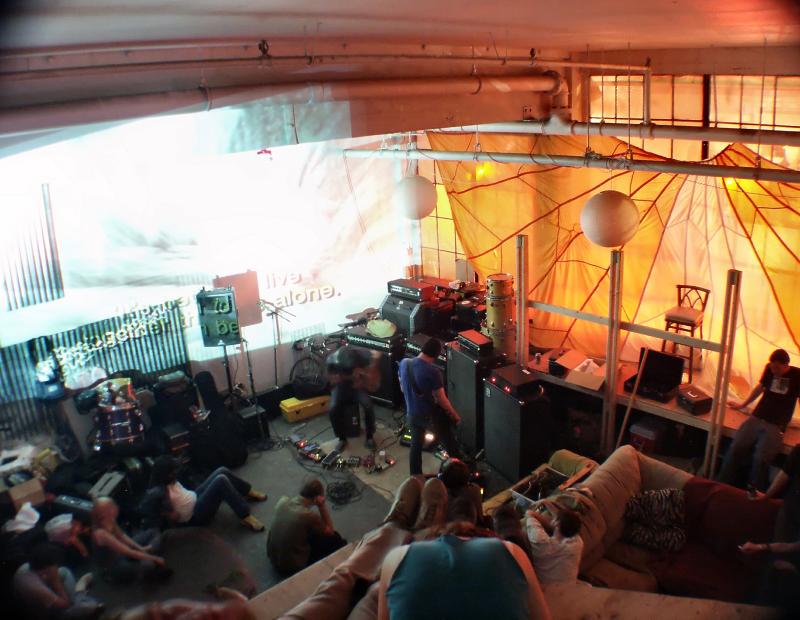 The Bay Area music scene in the mid-’00s felt underrepresented in the local and national press, but parts of it were undergoing a bizarre growth spurt. It was also starting to decentralize, and geography was becoming less important than a shared aesthetic sensibility. There were lodestones and reference points that worked whether one was in Oakland, Portland, Chicago, Baltimore, Providence, Miami, or Vancouver BC. I tried to bolster this little scene-that-barely-could and existed in spaces that could not be promoted in the legitimate press — warehouses that were mostly clandestine live/work, for instance. I wrote about bands for the SF Bay Guardian, but wonder if I was doing anyone any good by doing so. Realizing I was no Lester Bangs or Greil Marcus or Byron Coley, I just wanted to contribute to this ecosystem that had given me a sense of ethics and community, but the scene might not withstand public scrutiny. 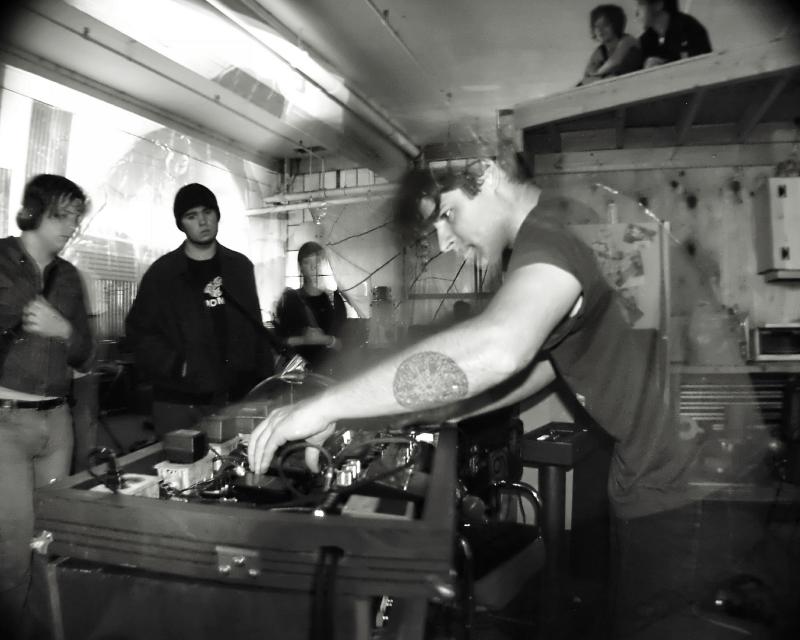 The mid-’00s noise rock scene in Oakland was averse to having much of a digital footprint, and YouTube did not really make a splash until 2005. A lot of the scene had moved to Oakland, where there was just more space, fewer eyeballs, and less of a chance someone would call the police on a loud show. Lobot Gallery, Ptomaine Temple, and 40th Street Warehouse thrived for years under this protocol, and it is inevitable that this mirrored and presaged the impending waves of gentrification we see today. 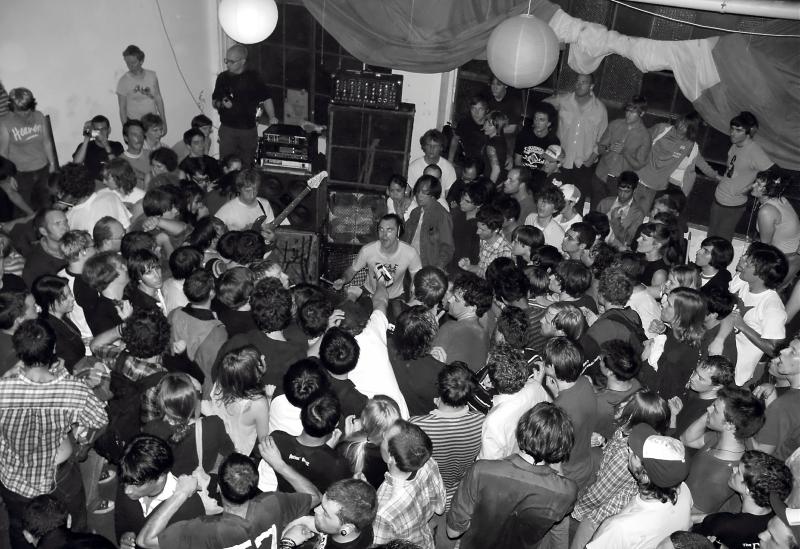 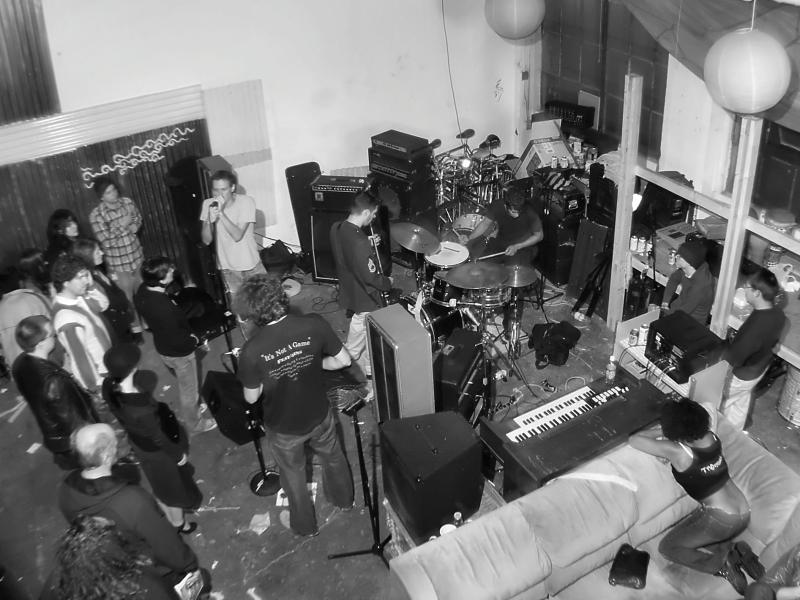 One haven for the noise scene sprung up within and around a West Oakland warehouse that had several venues under its roof, including one that did get blown up in the local press.

Musician Rob Enbom moved in to one of the spaces in 2003. Housemate and musician/artist Amy Friebertshauser (Oaxacan, Freak of Araby Ensemble) recalls that the first Grandma’s House show was on her 22nd birthday. Enbom’s numerous projects (Gang Wizard, Hospitals, and Vholtz, which I later joined) played early shows and helped determine the vibe. There were non-musician housemates, like Mason Moore, that wanted the shows to happen, helped book them, and welcomed the chaos into that space. If one stayed through five-plus-hours of a pre-show and post-show hangout, one could see the juxtaposition of physically confrontational performances with the domestic tranquility of housemates winding down and having a cup of tea. Randy Lee Sutherland (Breakarts, Vholtz) and Eva Saelens (Inca Ore, Alarmist) lived there for chunks of time as well. Someone’s frightened cat hid in the drywall and had to be rescued with power tools. 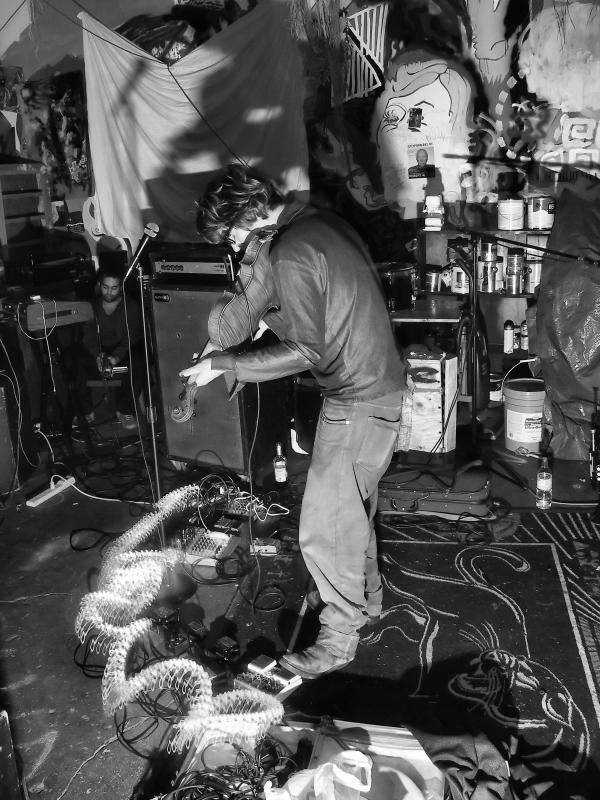 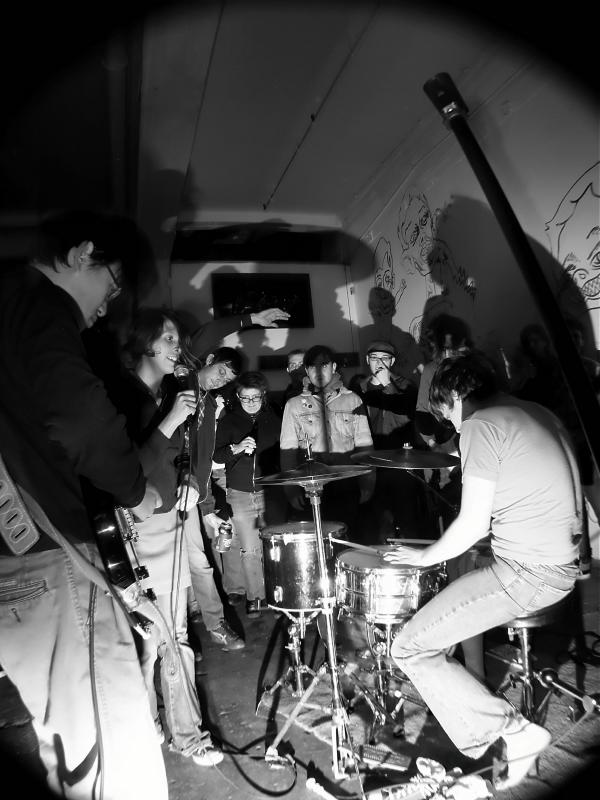 After 2005, Cansafis and Brian of the band No Doctors moved in, and that marked yet another era. The infamous Nandor Nevai was known to hang his hat there as well. One distinct memory I have of that time was that they painted the entire bathroom black, which is rarely ever done. There were a few ways into the building, the conventional one being a security encoded parking lot on Market Street. But for Grandma’s shows a ladder dropped down onto Myrtle St. and lead directly into the window. When I try to describe this scene to outsiders, the infamous Cock E.S.P. show comes to mind. 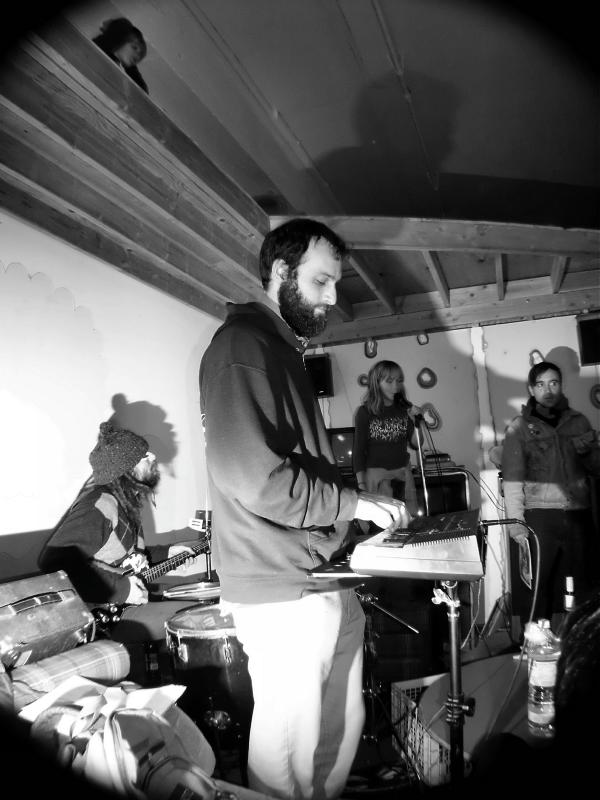 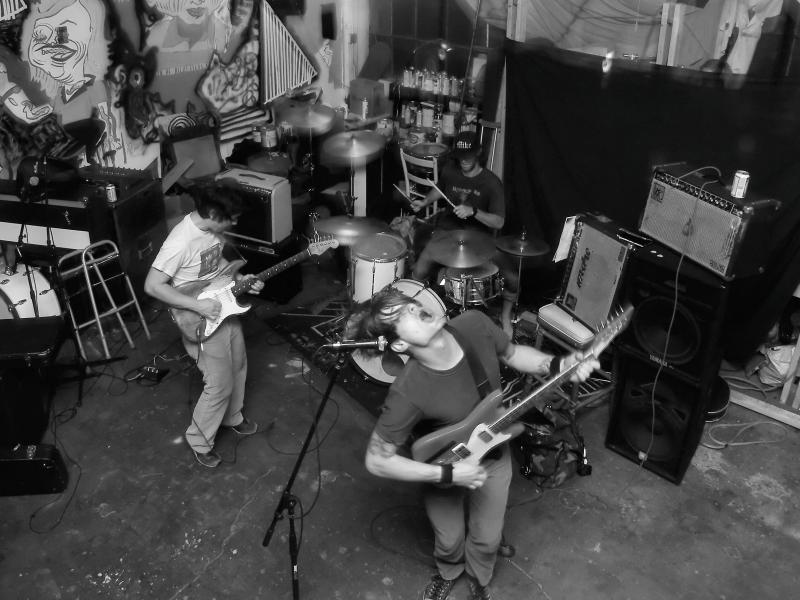 The Minneapolis-based band had existed since the early ’90s, but by the time they came through town in 2005, they had added Elyse Perez. Perez came from Laundry Room Squelchers, a rotating cast of noise miscreants headed by a Florida gentleman named Rat Bastard. During their show at Grandma’s House, the room filled with fog machine for about fifteen minutes before the band launched into a set that was incredibly short, messy, and drunk. A prominent feature of the warehouse was a deck-like second floor structure with no railings. Perez, who I would say is not much larger than 5’ 2”, yanked an audience member by the hair, pulling him up to that second floor loft level in a reverse-Rapunzel move that was luckily captured on film by Lars Knudson. 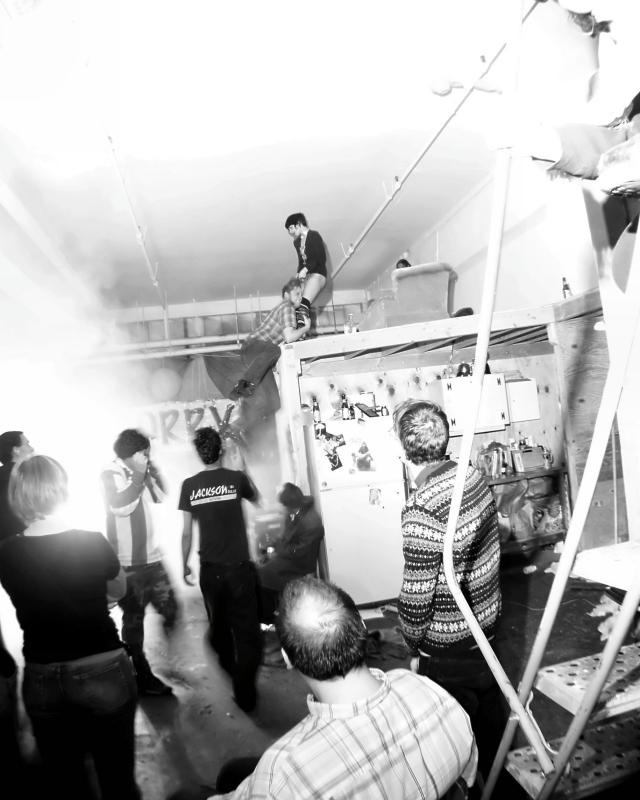 Lars Knudson is a very enthusiastic gentleman that would often drive up from San Jose to document shows in mostly black and white photographs, a microcosmic Glen E. Friedman to a very fleeting scene. I tried to select some of my favorite shots that show both the space and his compositional style.

When I asked him if I could share his photos, Lars said:

Grandma’s events were some of the most powerful, shocking, sexual, mesmerizing, hypnotic, ridiculous, terrible, pointless, fantastic… all at the same time.

I made life-long friends and connections that were transformational. It was truly a global, integrated, accepting, super-freakout warehouse. Good times, BYOB, drug-laced, sexy hodge-podge of the hippest of the hip. Everyone was so beautiful.

And yet, it was someone’s giant living room/kitchen/living space?!! Like ten units?!? I doubt I would have been so tolerant. Hats off to them.

Still one of the most important show spaces in bay-area weirdness. 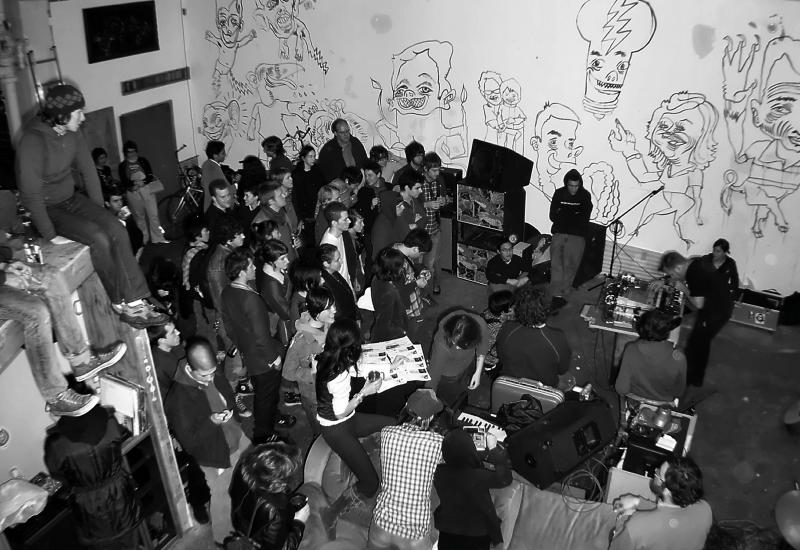 The cartoon mural in many of these photos is by illustrator/designer Matt Hart, an old friend of myself and Enbom who also made many show posters. Hart currently resides in North Carolina. I had emailed him to get his memories of Grandma’s house, here’s what he recalls.

I thought Cock E.S.P. was going to kill me. One of the most brutal performances I’ve seen in a long time. I seriously thought someone was going to get crushed by that couch above the kitchen on the platform. That show was amazing! Noise should always be that amazing! The Steve Mackay  show when No Docs free jazzed all over the place was fucking great. Coughs show was a blast! That was the same night Rob told the police they had no jurisdiction in Hell I think. Friends Forever!!! So GREAT!!! Great vibes! FUN!!! Damn, unstoppable/untoppable. I think I have that MDudes show on video. What a jerk! I have photos of my mural somewhere too. Grandma’s was ruling. New Year’s day Badgerlore quiet show was awesome in it’s own right. Things were pretty amazing back then. 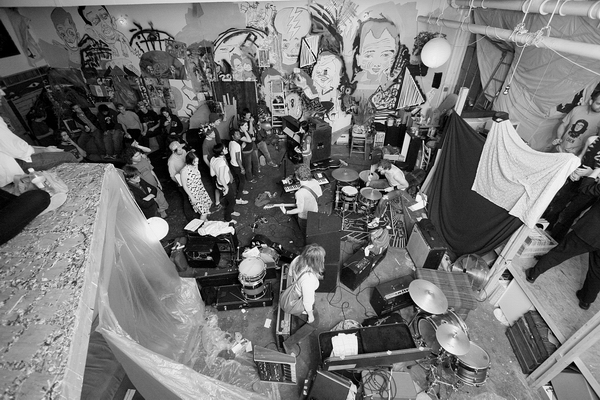 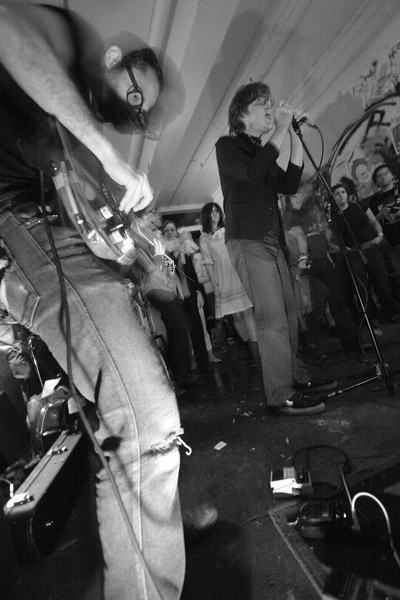 A few other individuals have great photos and video from that room. Mike Costuros captured a very dynamic Monster Dudes show. Shannon Corr provided photos of Hustler White and Wet Confetti from his archives. Kevin Brown plays in numerous bands and has been hauling a video camera around to Oakland shows prior to the ubiquity of handheld cellphone videos. These brave souls withstood any momentary sense that they lacked etiquette or were violating some unwritten rule of documentation, and for this we thank them. 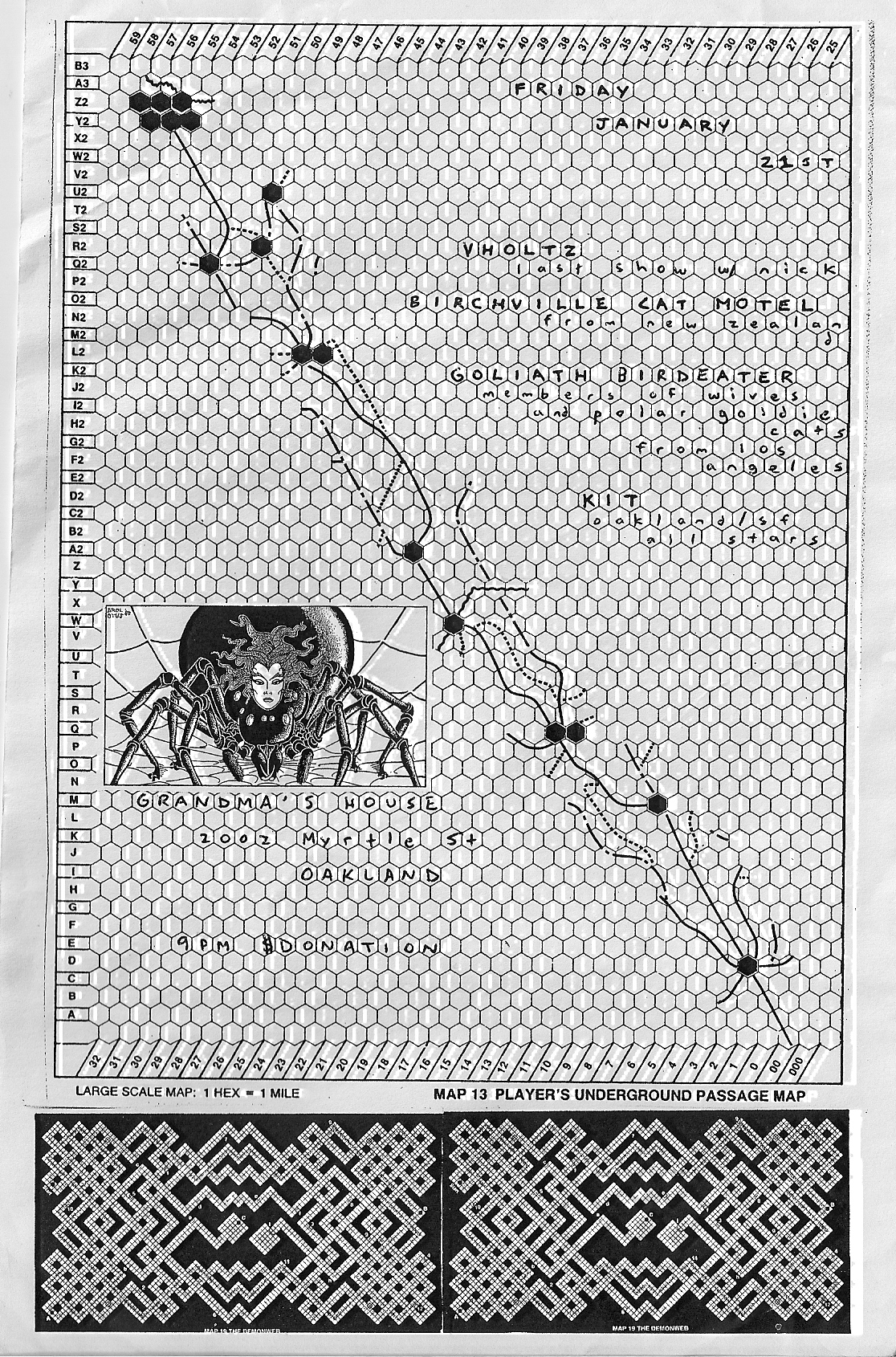