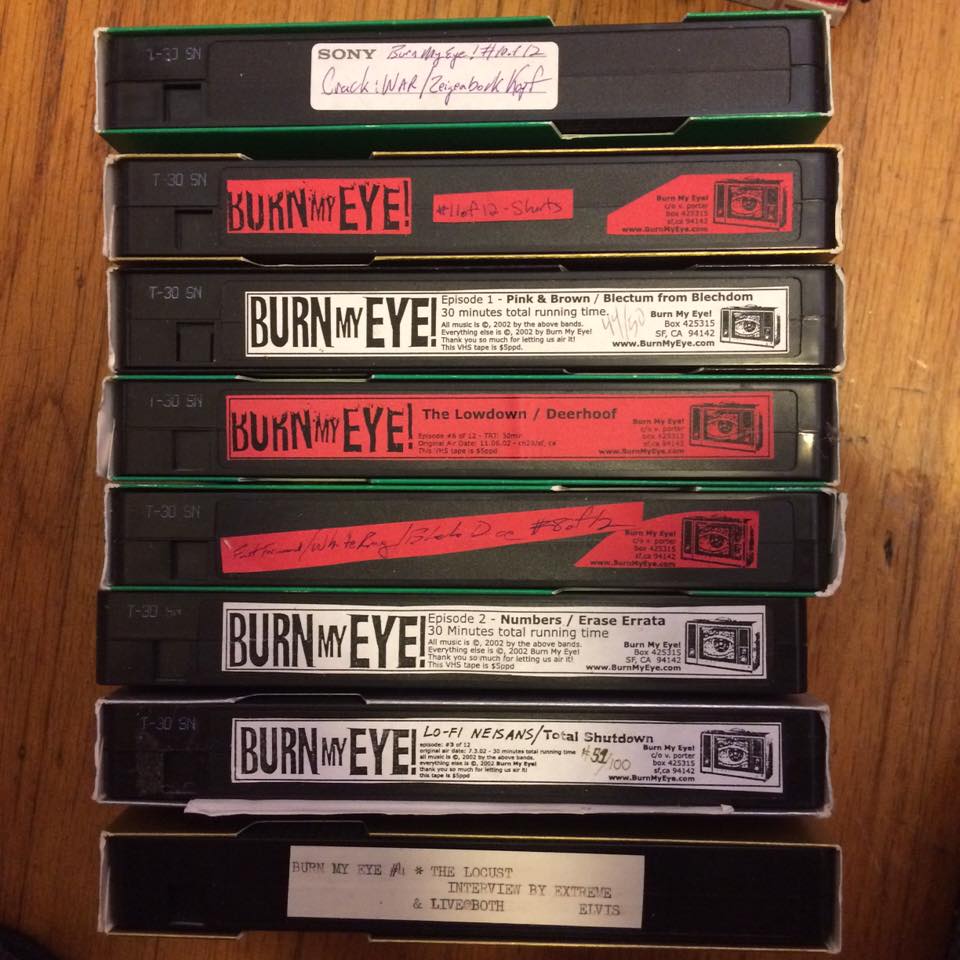 Photo by Paul Costuros, from his personal Burn My Eye VHS collection

It was 2001, and I had returned to California from a strange stint in New York, where I basically went to a lot of noise shows by myself, barely worked, and ran through my savings in about six months. When I got back, I stayed at my parents’ house and worked a series of odd jobs, including gigs at a movie theater and a Montessori preschool.

My main social grounding was the music scene I’d been involved in as a promoter and a musician. There was a fellow I met about town in 2001 named Virgil Porter who must have moved here in that short time I was gone. A total character, he was from San Diego by way of Alaska, where he’d done college radio and took live music photos for his own pleasure, and sometimes for publication in the SF Bay Guardian. I was trying to be a music journalist at the time as well, and we were on a message board called Spockmorgue, so we crossed paths many times.

In early 2002, Virgil pitched the idea of doing an interview/live performance video program for public access television. He cited Target Video, another San Francisco video institution created by Joe Rees in the initial punk counterculture, as a direct influence. Virgil would be responsible for the technical stuff, like shooting and editing, but he wanted my editorial input as to who we ought to cover. This seemed like a business proposal, but there were very few dollar signs glazing over our eyes. We just wanted to document something that felt special at the time.

I remember going back and forth over email with a wish list of who we should put on — a representational slice of what was happening in our particular corner of the San Francisco music scene. We both appreciated punk rock music, but I wanted to make sure there was more than rock in there. I do not mind playing a second banana or lieutenant/Hand of the King to someone who has more charisma or vision, it’s a role I’ve inhabited in many of my creative pursuits. Virgil also handled the task of attending the Channel 29 Access San Francisco public meetings, something I could not fathom doing. The very first episode of Burn My Eye aired on April 3, 2002, and featured two very different duos: Pink and Brown and Blectum From Blechdom.

Here were some other examples of what aired on Channel 29 in 2002.

Virgil chose the name “Burn My Eye” from a song by the Australian punk band Radio Birdman. The show lasted about a year, with twelve episodes completed. Virgil dubbed VHS copies of each episode, giving a chunk of tapes to the bands themselves, and then tried selling the rest to local shops like Record Collector and Aquarius, even sending some out by mail. He released a DVD in 2003; I recall that the menu was impossible to figure out, with the intention that you’d get a random order when you hit play. The DVDs sold out within a few months and were never re-pressed. I don’t even have one. Most of the content is available at the Burn My Eye website. And here’s a piece that Kimberly Chun wrote about Burn My Eye for the SF Bay Guardian. 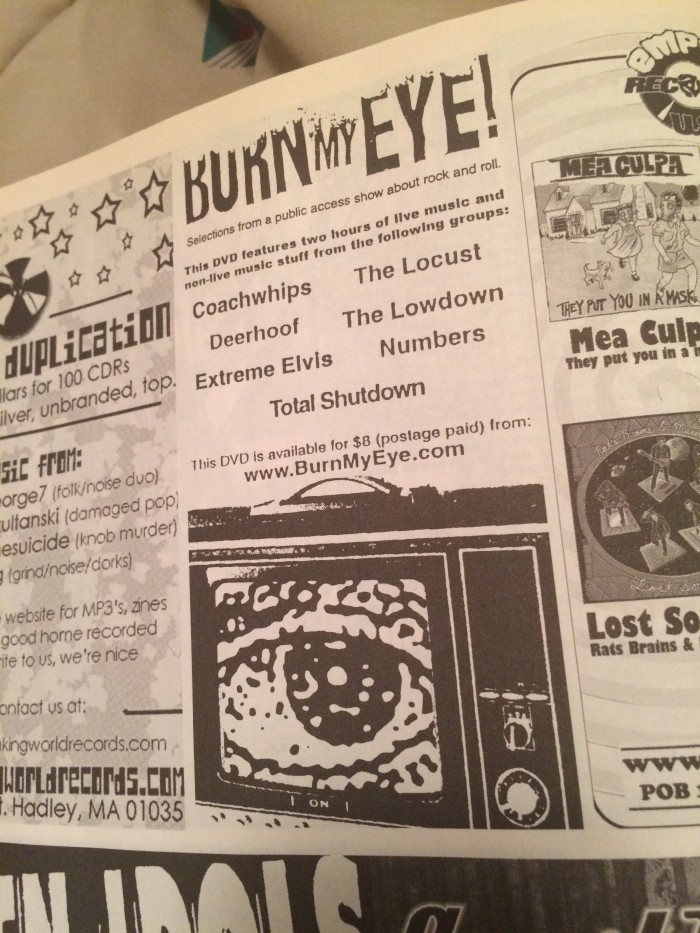 The most infamous episode is not on the site nor on the DVD, however, because the artist claims he did not know what the footage was being used for and that he hadn’t consented to having his work online. I don’t even have the final edit, so I’m recalling this as best I can:

The artist known as Fast Forward, whose true identity I will refer to as , performed at the room formerly known as Kimo’s at the corner of Polk and Pine. I remember going to film the show with my roommate at the time and a friend who was visiting for the summer from Houston, Russell. Fast Forward performed a very short, loud solo set, at the end of which he appeared to have maced himself in the face. We took him downstairs and he stuck his entire head in the venue’s ice machine. We filmed all of this on night-vision setting. We ended up walking around the corner to the Grubstake diner on Polk and peppered him with questions as he ran his face under the bathroom sink. The whole time, insisted that he was not Fast Forward, and that the two entities were separate, although we had just recorded him carrying out this bizarre, masochistic self-attack. We knew we had filmed something very strange and sent the footage to Russell’s friend Casey in Houston, who edited that piece together.

The episode was rounded out with a piece by Oakland experimental group MonoPause under the guise of their right-wing alter ego The White Ring, and a meltdown performance by Black Dice from 2000 that I had set up at Cocodrie, which included John Dwyer dragging Eric Copeland around on the floor. The episodes were always half an hour, and we would often hold ten-person viewings at a bar that had cable, usually Kimo’s. Channel 29 aired the Fast Forward episode on January 1, 2003, the slowest day a bar could have. We went to Kimo’s, which was the closest thing to a CBGB’s (or Cheers) that our little scene had, thanks in no small part to Matt Shapiro, who could often be found running the door, doing sound, booking, and bartending. Virgil and I sat watching alone, save for a handful of barflies who could not be bothered to notice on the widescreens that this greenlit man was sticking his toxic face into the ice machine of that very establishment. If you were a germophobe, Kimo’s was not for you.

Another episode that made its way into the popular consciousness at the time involved a performance art character known as Extreme Elvis.

He’d been assigned by Virgil to interview The Locust, and I remember thinking that this was a bad idea; I was not present for the taping or the interview. The notion of these somewhat serious, dour San Diego punks interacting with a large man who loved nothing more than getting naked in public seemed like it would ruin what little “name” Burn My Eye had developed. Watching this episode today, it is strange how much The Locust dominated underground music discourse in 2002. They practiced a mix of musical styles, marrying synth prog and blastbeats, and they had a great stage show. People would show up in droves to their shows and pay for the privilege to be aggressively negative towards them. They had become a filter through which people projected their own issues. I didn’t recognize the convention of trolling at the time, but this episode promised a little Jerry Springer-style controversy.

I believe this is where you put “NSFW.”

For the purposes of this column I thought it would be good to include both the man behind Extreme Elvis, and Virgil himself, via email correspondences. Virgil Porter has lived in Alaska for the past decade.

Virgil, I wanted to give you an opportunity to chime in about your vision for what Burn My Eye was, the challenges of doing Basic Cable in a pre-YouTube age.

Virgil Porter: Public Access Television allows interesting ideas to actively enter public homes through a passive media source. I encourage everyone to become oriented and learn to use their local publicly accessible media facilities. The challenges involved in accessing public media are minor at most. The sign-up process may be a bit more in-depth than YouTube, but the audience is worth it.

I was gonna write a little bit about how weirdly the Locust dominated so much of underground music dialogue in the nascent Spockmorgue/early message board/early internet scene.

VP: I’ll shoulder my part of the blame for keeping Locust/Three One G etc. in our conversational narrative of that time period. Their electric, Black Flag-ian approach to rock and roll continue to interest me.

I’m sorry my buggy whip commentary is so dry. My life has switched to running a boat, catching fish, and keeping an AM community station on-air.

Extreme Elvis wrote from his current home in Amsterdam.

Do you remember thinking anything (positive or negative) about the Locust before Virgil asked you to do this interview for Burn My Eye?

Extreme Elvis: I didn’t know anything about the Locust or their music. Virgil simply told me to antagonize them. And once I met them, I realized that they deserved it.

For those who know nothing about Extreme Elvis in 2002, how would you explain it to someone now?

EE: We were the Elvis tribute act San Francisco needed after the first dotcom bubble burst. An all-nude, shitting, pissing, and proudly fat Elvis. We tried to play every show like it was our last. The secret ingredient was [having] a great band. Every musician who shared a stage with me was brave as fuck, because they knew I might make them do anything. But they never dropped a beat or missed a note. It was a rock and roll show, and they always delivered. I was just the conductor. The one stupid enough to roll around naked in broken glass. They kept folks dancing.

The basic cable format has been usurped by YouTube, but putting this on “the air” was a big task back in 2002. Do you think Extreme Elvis got the reception you/it needed, or do you think he would have been more of a meme later in the decade, or was live performance the greatest place he shined?

EE: There are plenty of clips of us on YouTube, but nearly all of them are censored. The best stuff isn’t fit for Internet 2.0. The live show was the best way to experience us. Virgil was able to capture a lot of the live experience in his Burn My Eye segment on Extreme Elvis. Public access TV, much like the early Internet, was much freer and wilder than the media is today. Now we have access to 10,000 channels and the world is at our fingertips, but everything is filtered through big media corporations and planted inside walled gardens. We have more consumer choices and less freedom.

I don’t think that we could do our show in 2015. Remember that the whole band would get naked. The audience would sometimes get naked. People would do wild things at our shows. Now, everybody has a smartphone that can automatically upload those precious moments to a dozen social networks instantaneously. Nobody would be willing to be so free in public nowadays. Folks talk a lot about surveillance by the NSA and Google, but what really controls people nowadays is interpersonal surveillance — the fear of what your boss, your co-workers, your family, friends, or landlord might think if they saw you letting it all hang out. This is the self-censorship we all accept, now that we live in public.

On the other hand, if people still crave a bacchanal, they can always eat mushrooms and hang out with Grover Norquist at Burning Man. That’s totally sanctioned by SF’s new tech overlords.

I know you were just back visiting San Francisco. What do you make of the city now?

Is Extreme Elvis retired? How do you spend your retirement these days?

Next: I’ll continue talking about the music scene in the Bay Area from the ’00s, focusing on an Oakland venue.