It is with great pleasure that Open Space is reproducing online for the first time select documentation by Dennis Leon (1933–1998) of the majority of his environmental sculptures. With deepest thanks to Christin Nelson. 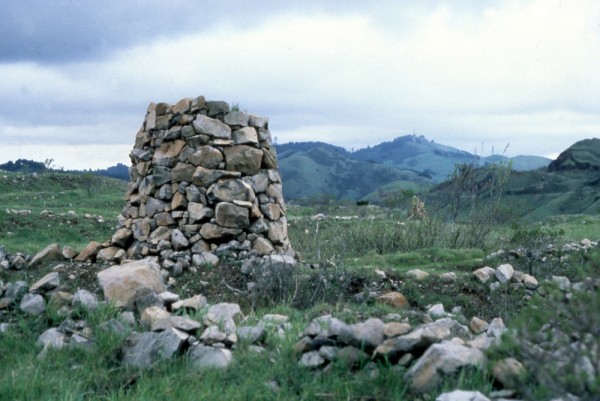 Dennis Leon began making unsanctioned, site-specific installations in the Bay Area in 1975, first with a suite of text-based works set amid the ruins of the Sutro Baths in San Francisco. Poet and fellow California College of Arts and Crafts (CCAC) faculty member Stephen Ajay recalls having introduced Leon to that area: “This piece of coast was inspiring. I wanted to share that place with him. We went there and he was very taken with it.” Leon’s lyrical prose, written on building fragments, imagined how the remaining structures bore witness to the history of the abandoned building complex, which was consumed by fire during demolition a decade prior. He and Ajay later began collaborating on several works featuring poetry, in which Ajay was invited to respond to spots to which Leon was drawn.

Leon was profoundly moved by his relationship to the California landscape; working directly in nature “opened up to his life’s work,” observed his widow, artist Christin Nelson. The installations were left at the sites, with the exception of the sunrise-to-sunset duration of Vacant Lot Piece (1976). Many pieces turned out to have ephemeral lifespans. His Sutro Baths Suite #4 (1975)—a grid of metal letters suspended in a cave—was swept away by the tide on its first evening. Two panels inscribed with text attached to the end of a crumbling Berkeley pier mysteriously disappeared after a couple months. Teenagers picked off a few letters from the spiral-shaped poem of Payless Piece (1976) on a cliff near CCAC (now California College of the Arts) over the course of a week. For SFMOMA’s off-site commission series Installation and Performance Pieces: Golden Gate National Recreation Area (1977), Leon created a lattice canopy structure over a ravine in the Marin Headlands’ Oakwood Valley: a camouflaged net made of woven grasses that became visible to visitors on the trail descent as they passed beneath. 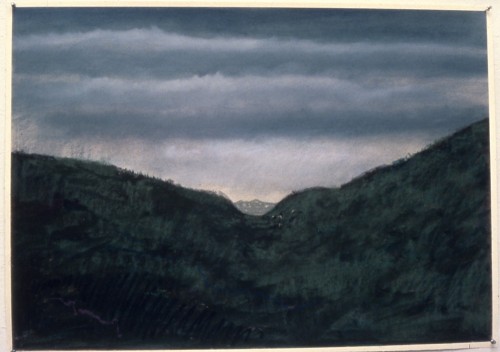 In addition to outdoor installations, Leon exhibited his pastel and charcoal drawings of landscapes where he sited sculptures. For instance, one of the views that he drew again and again was from an impression from his Sibley Mound (1980), which featured rocks gathered and assembled on-site with hand tools during visits to the Sibley Volcanic Regional Preserve. (I’ve wondered at times whether I could find that location or traces of his other off-trail, hillside works in Sibley Park, one on a far corner of private property, after decades of exposure to the elements and potential human modification. These pieces were considered formal descendants of the ancient man-made structures that he encountered during his youth roaming the Yorkshire moors.) The artist often positioned his work in proximity to existing built elements in the environment. Leon’s final outdoor commissions integrated cast bronze rocks, particles within the continuum in nature. They evolved from the process behind his highly crafted sculptures, in which he built up layers of plywood and then charred or painted the roughened surfaces to resemble logs or geological formations. 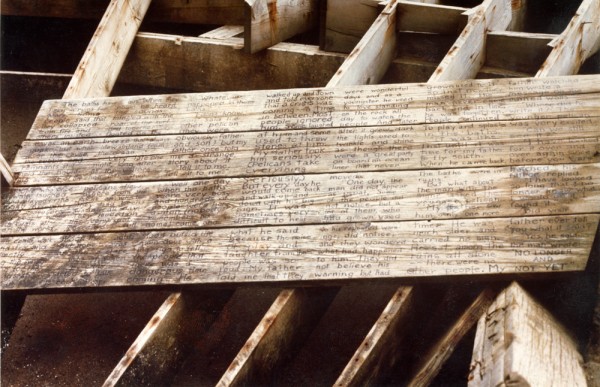 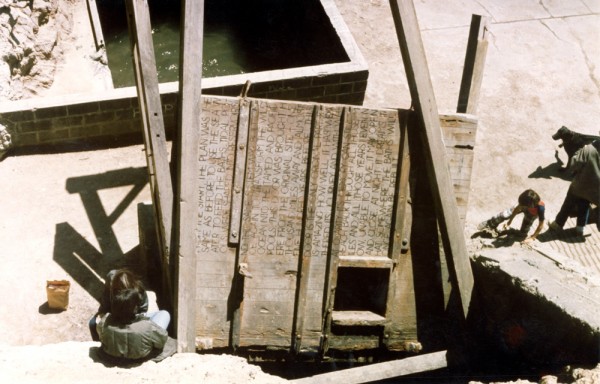 From the start the plan was the same as before: to use the seawater to feed the baths. Tidal pools were shaped into reservoirs and the same system was built once again to transform the wild ocean into the tamed and pacific pools. This door was brought here from the original site – one thousand miles away and almost five hundred years before. This door is the only original part. It is amazing how well it has weathered its journey and with what clarity of memory can still reach back through all those miles and all those years! Even now, unable to move, it may open and close. At night, it dreams that somewhere the baths will once again be rebuilt. 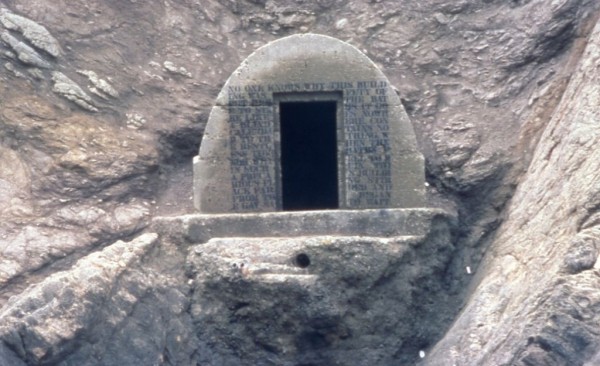 No one knows why this building was put here to stare like a blind calendar to the restless tide, nor why in such a precarious place far from the gay safety of the baths. It leads nowhere and contains nothing. When the baths fell to ruin this building stirred and began to wait. 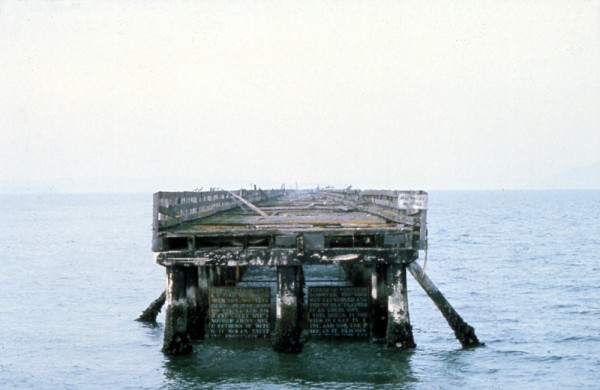 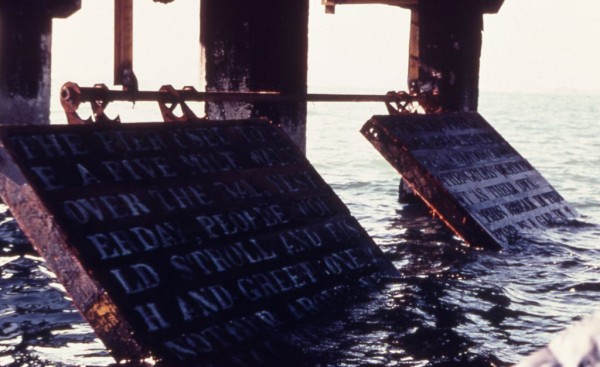 The pier used to be a five-mile walk over the bay. Yesterday, people would stroll and fish and greet one another above nine fathoms of water. It was an exciting promenade, a thrilling adventure for more than one hundred thousand people each year.

The pier was abandoned and the gulls claimed it as their own. This break in the pier is a gap in time, and now the pier, as it reaches out from the land, is both a haunting memory and a stirring vision. 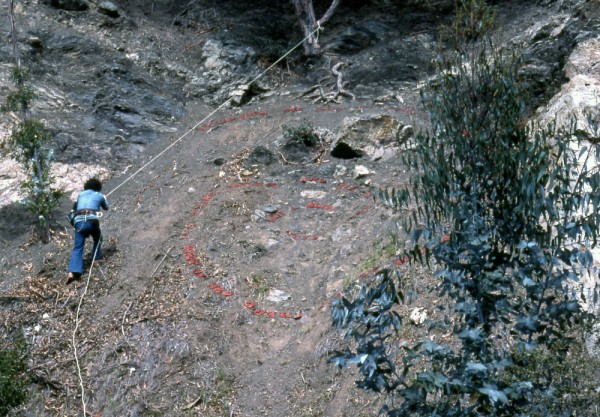 Words have budded here in the draw with this tree, a crossroads for beginnings. The roots of and shreds of rock are a secret. Beauty is held away from us but there are no edges: this desert, payless and the sky that dips like a body. 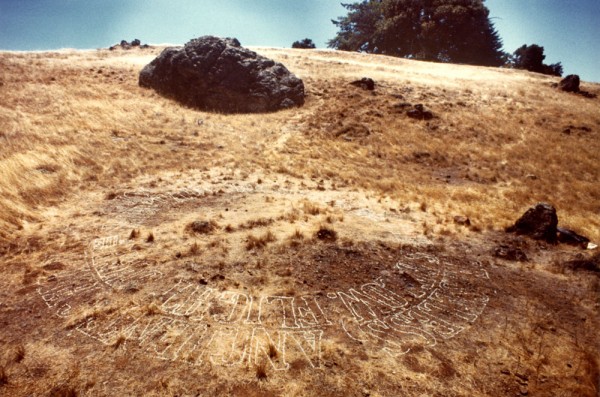 To scale these rocks and mount the sky.
To flat on the air and watch the earth below be formed.
To see the rocks emerge with ageless memory.

Ancient children cupped by the meadows palm.
The skies maintain their soaring flight—over the mountain,
over the stones and over the cities below.

Ancient children raise their heads.
Skies soar in ceaseless flight over
The mountain, the stones and the cities below. 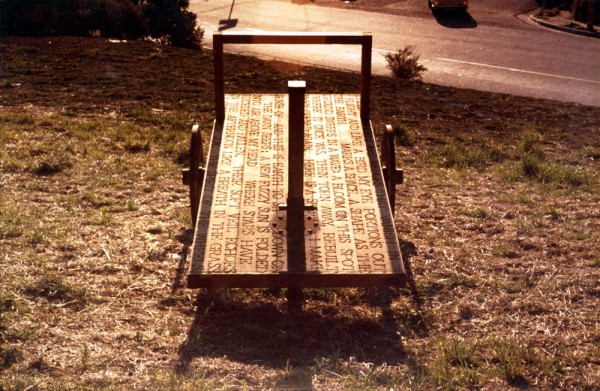 These wheels are wedges that vanish in light and like a bird my eye portions out the earth marks a space a shape as the ground sweeps in a wave: a bloom on this spot where it once was, then torn away, rebuilt then opened again. Here is a spot I make sense of: and this is earth to sit down on the dawn seeps; a new fuzzy sun is folded into air above my head where stars have receded and fallen. Their soft veil echoes in the afternoon like a breath in the grass. I spin for joy. The spirit of the wheels. 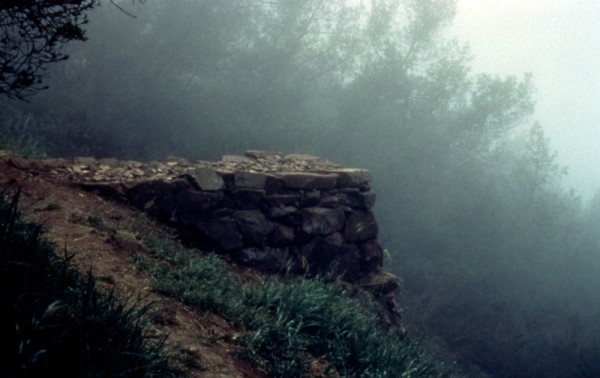 “The final and most recent piece, Path Piece, was completed in April of this year; it contained a text by Ajay scribed in stone-like ceramic castings by Sonja Zytkow. A stone cairn built by Leon and a group of friends along a trail in the Berkeley Hills served as a basis for the cast stone pieces, each of which contained a few words of the text, phrases such as “small animals,” “touching the land,” “each step is in air,” and “insects in stone.” – Phil Linhares, “Dennis Leon,” Visual Dialogue, 1977

“Each of Leon’s pieces seems to involve the viewer in progressive stages of awareness – beginning with a pilgrimage to the area, then climbing the hills and hiking up paths to reach the work and, after arrival at the site, experiencing the objects and writings and their impact on the surroundings. Observers move from the world at large to a specific place from which they look back, out to the world beyond the art object, this time seen through the filter provided by Leon’s settings and perceptions.” – Judith L. Dunham, Artweek, May 1, 1977, p.16 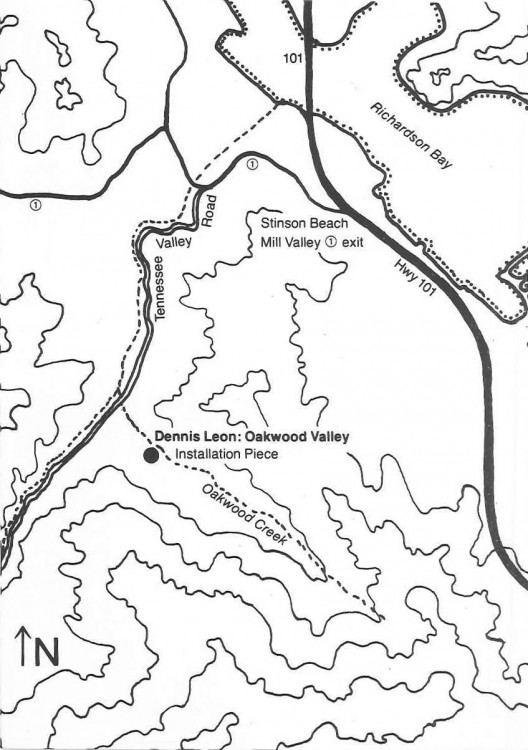 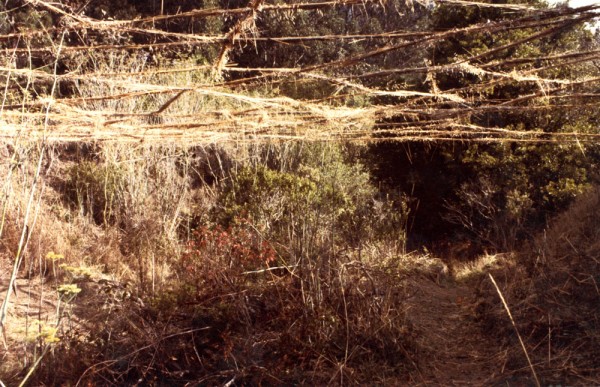 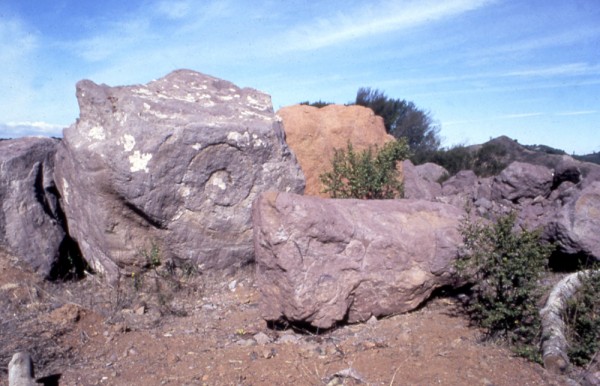 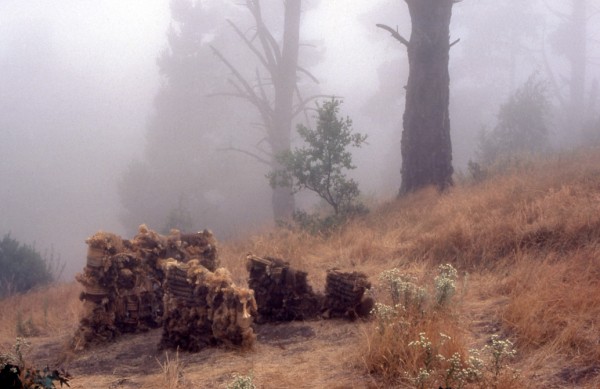 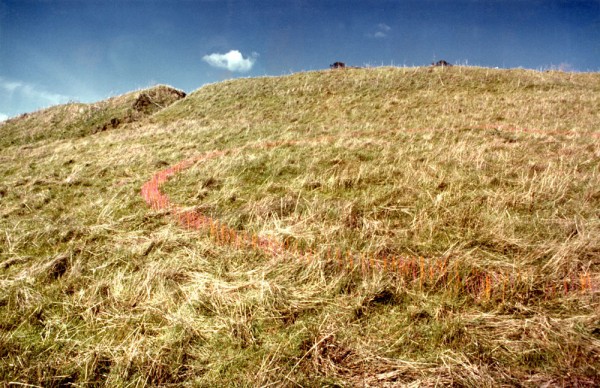 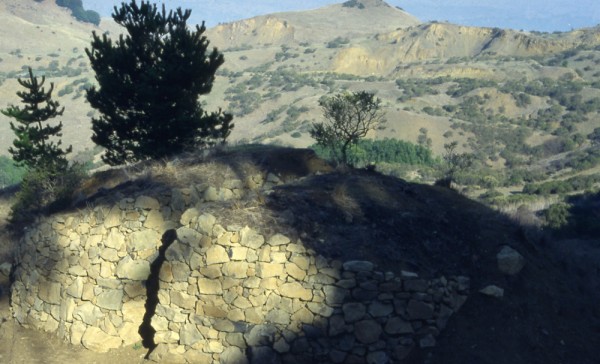 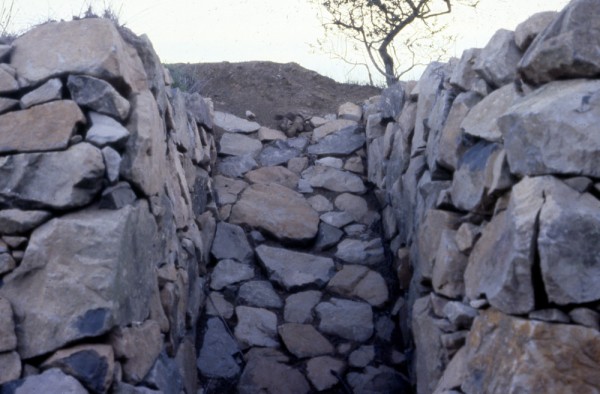 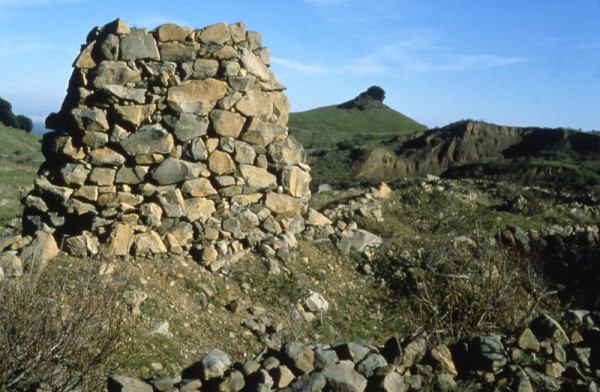 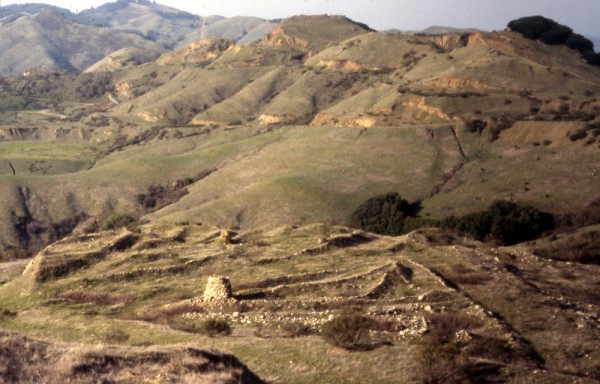 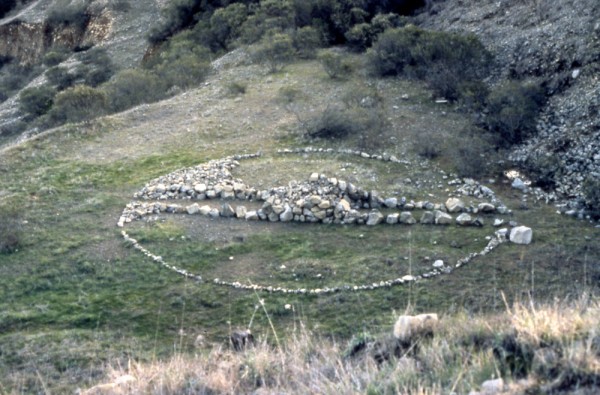 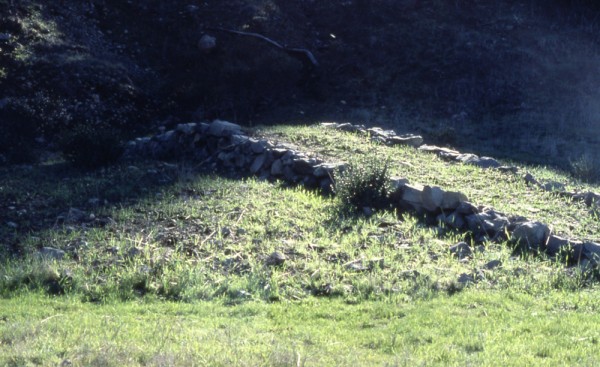 “To my mind, just as nature abhors a vacuum, so landscape knows nothing of vicariousness. When we receive the postcard of a beautiful scene, the writing says “wish you were here,” but the message is “this is where you are not.” I try to make art that says, “I am here.” Based on this introduction, I would like to share with you some of the work I have done and use it to illustrate four ideas which I have chosen to amplify that phrase “I am here.” The ideas are: one, a notion of twin or doppelganger; two, a notion of place; three, a notion of footprint; and four, a notion of physical orientation.” — Dennis Leon, excerpt from an artist’s talk, n.d. 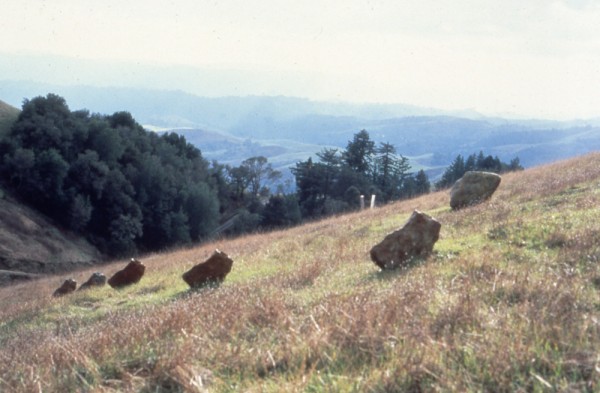 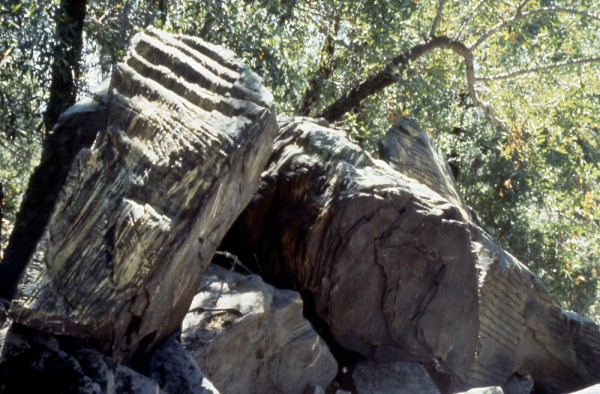 “Some things about nature that cross over into my attitude about art:

a Holistic assumption that
everything relates to everything

nature is made up of lots and lots
of little pieces and things — yet its unity is implicit.

nature doesn’t notice my dilemma
of being simultaneously in it and an observer of it.” – Dennis Leon, 1990

Born in London, Dennis Leon (1933–1998) was sent as a child to Leeds, in West Yorkshire, during World War II. He immigrated to the United States in 1951 to study at Tyler School of Art at Temple University. There he earned his BS (in education), BFA, and MFA. Leon served in the U.S. Army and Army Reserve (1957–63); joined the faculty of the Philadelphia Museum College of Art (now the University of the Arts) in 1959, held the position of director of its Sculpture Department (1967–70); and worked as an art critic for the Philadelphia Inquirer until 1962. Relocating to the Bay Area in 1972, Leon became chairman of the sculpture department at California College of Arts and Crafts (1972–1988), where the Oakland-based artist taught until his retirement as professor emeritus in 1993 and received a Distinguished Faculty Award and Honorary Doctorate. Leon’s work has been exhibited widely and is represented in the collections of SFMOMA, the Oakland Museum of California, the San Jose Museum of Art, Crocker Art Museum, the Corcoran Gallery of Art, and the Philadelphia Museum of Art, among others. His site-specific, outdoor installations continue to be on view at the Oliver Ranch Foundation in Geyersville and the Djerassi Resident Artists Program in Woodside. 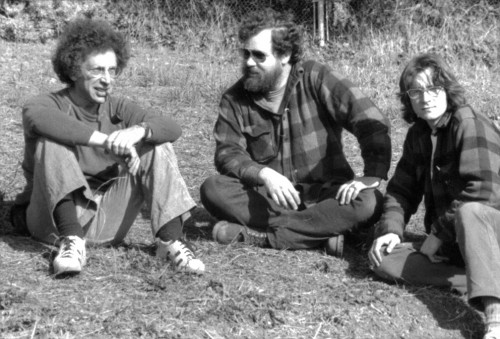