Amiri Baraka Will Be Missed 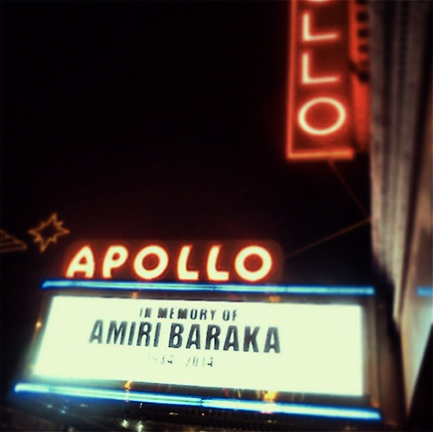 There will be both a wake and a funeral next weekend in New Jersey, where Amiri Baraka lived and worked. The wake will be important because his passing has been a cause for deep reflection among the countless poets, writers, and artists that he touched. Collaborating constantly, he was in Paris just last year performing with his old friend virtuoso pianist and composer Cecil Taylor.

Baraka also had many friends in the San Francisco Bay Area and made frequent under-the-radar appearances on KDVS with Justin Desmangles, jazz historian and chairman of the Before Columbus Foundation. Desmangles also hosted conversations with Baraka at the San Francisco Public Library in recent years.

Baraka was a force to be reckoned with as a writer, a publisher, and a personality. His prolific activity connected him to many avant-garde writers and poets of his generation including the Beats, the Black Mountain poets, and the New York School poets. In fact, he ended up publishing many of them, including Allen Ginsberg and Jack Kerouac. Along with poet Hettie Cohen he co-founded Totem Press and the quarterly literary magazine Yugen. Then along with poet Diane di Prima, he co-founded and co-edited the magazine The Floating Bear. If that wasn’t enough to keep them busy, he and di Prima then started the New York Poets Theatre, which became a hotbed of experimental acting, choreography, and performance. In the early 1960s he was also a member of the Umbra Poets Workshop, which included David Henderson, Steve Cannon, and Ishmael Reed. By 1964 Baraka was already an important and influential figure by any measure. But then something happened.

For Baraka it was an emotional punch in the stomach. He had just met Malcolm a month before and he said it had changed him. In fact, the assassination was one of the reasons he changed his name from LeRoi Jones to Amiri Baraka — that, and being beaten by police at one point. It also caused him to move to Harlem — to get away from the familial, yet mostly white, artist refuge of New York’s East Village.

Once in Harlem he used his visibility, along with a renewed sense of purpose, to kickstart what is now called the Black Arts Movement. He and other collaborators like Askia Touré and Larry Neal advocated African American perspectives and voices in art and literature. For a time he was the central figure in what was considered the aesthetic branch of the Black Power Movement.  The Black Arts Movement became influential because of its unequivocal rejection of whiteness as the normative force in American arts and letters, and its unapologetic embrace of African American agency in the arts.

But Baraka wasn’t alone in how he felt. The murder of Malcolm X was just the tipping point for a generation who had seen many of their their heroes killed in cold blood.  Just the year before three Civil Rights activists had been murdered by the Ku Klux Klan. The difference with X’s murder though was that he was a national leader and one of the most eloquent speakers on the subject of human rights. In effect, his death radicalized countless people and led to the formation of the Black Panthers.

Eldridge Cleaver wrote about it in his Soul on Ice, a sobering and unapologetic document of prison life. More pointedly, in Bobby Seale’s Seize the Time: The Story of the Black Panther Party and Huey P. Newton, Seale wrote, “I got mad, I put my fist through a window. I told them all, I’ll make my own self into a Malcolm X, and if they want to kill me they’ll have to kill me. . . . That was a big change for me . . . Malcolm X had an impact on everybody like that.”

The following year, in 1966, Seale and Huey Newton formed the Black Panther Party in Oakland. Eldridge Cleaver joined them and became Minister of Information. Cleaver, along with Marvin X, Ed Bullins, and Ethna Wyatta, went on to establish an Afro-Centric cultural center in San Francisco that attracted all manner of black intellectuals, artists, and musicians. Through all this activity the Panthers gained popular support within the 1960s counterculture and scared the hell out of white America. The momentum of the Black Power Movement threatened the social order established through a century of Jim Crow laws and as a result both Federal and State law enforcement organizations took every opportunity to crack down on anyone associated with it. Baraka was friends with all these people.

Of course, this all happened before 1970. I realize I left out the numerous recordings he made and the records he appeared on, but I have to stop somewhere because there’s just too much more ground to cover. Oh yeah and his books — he wrote twelve books of poetry, six plays, ten non-fiction novels, three novels of fiction, AND he found the time to appear as himself in over twenty-six films.

Kind of makes you wonder what artists and poets these days are doing with their time, right?
Needless to say, he will be greatly missed.