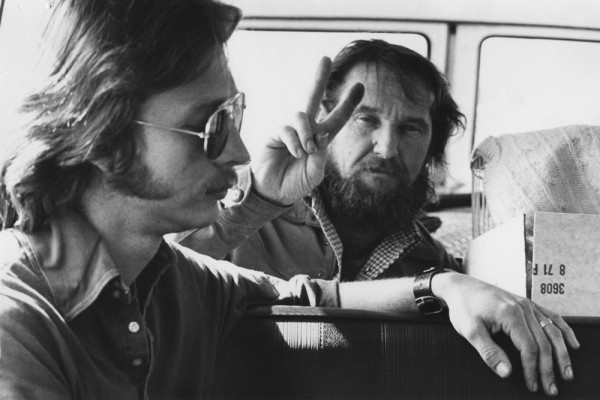 “I’ve been involving myself with the landscape of San Francisco since 1969 — its abrupt geology, the beauty of its architectural geometry, and the diverse composition of its people. The city offers a lot of physical options for outside public events, especially events that can center around the social concerns of urban life. And this, for me, has led to creating a number of political art events that have mixed the absurd and the serious. I especially want to work with ideas that use the elements of surprise and humor, such as having early morning commuters find a herd of cardboard Holstein cows on the loose, parading on the overpass in Union City, or like the planting of the word YES on the grassy hillside of Bernal Hill in Potrero, or the friendly gathering of 100 yellow cabs on the wide open intersection of Castro and Market.” — Mel Henderson, in the voiceover introducing Documentation of Three 1969 Works: Searchlights, Oil, and Yellow Cabs (1994) 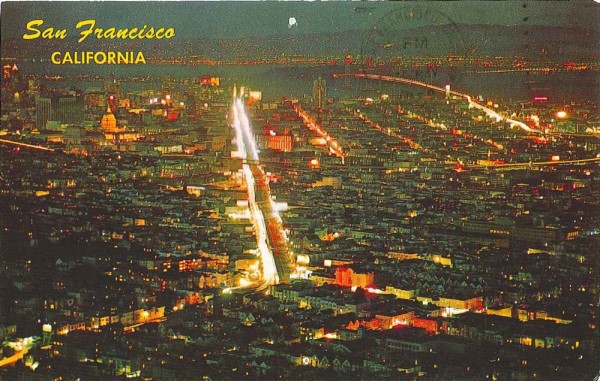 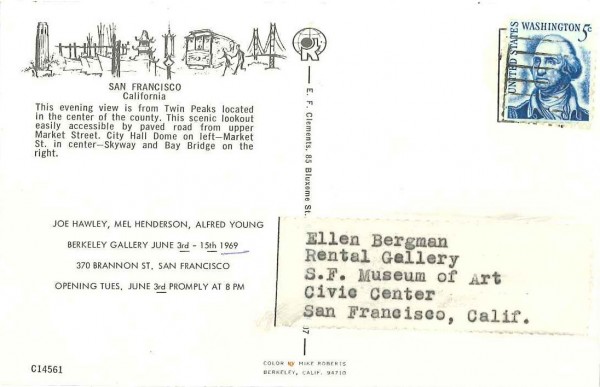 Mel Henderson welded shut the locked doors of the Berkeley Gallery in San Francisco’s South of Market neighborhood on the advertised opening night of June 3, 1969. The gallery inside was left visibly empty. The exhibition was on the outside: thirteen searchlights installed along every other block of Market Street, from the Ferry Building to the foot of Twin Peaks. Each searchlight turned to the sky was manned by professional attendants and directed by groups of participants, the beams intersecting with two planes hired to fly low overhead, one towing flares. Discussing with the San Francisco Chronicle that evening how the searchlights were the event itself, Henderson declared, “The gallery no longer serves an important purpose. The thing is for people to see how the environment can be changed, how it can be beautiful.”

An artist member of the Berkeley Gallery, Henderson had invited Joe Hawley and Alfred Young — two younger fellow faculty members at San Francisco State College (now San Francisco State University) — to collaborate on an event. The three artists had been profoundly influenced by the five-month student-led strike at SF State in 1968–69, the longest strike at a U.S. university. For Hawley, the activation of outdoor space and the nonviolent demonstrations of freedom of speech offered “a sense of options of expression, which directly led us to the streets.” The original plan for Searchlights was to extend the line of lights to Berkeley, where major confrontations between demonstrators, the Berkeley police, and the National Guard occurred during efforts to occupy and establish People’s Park in prior weeks and where 30,000 people had marched peacefully on May 30. Henderson and Hawley brought in Robert Campbell, a student with a Helio Courier plane, to assist with the planning, implementation, and aerial documentation of this and other works. 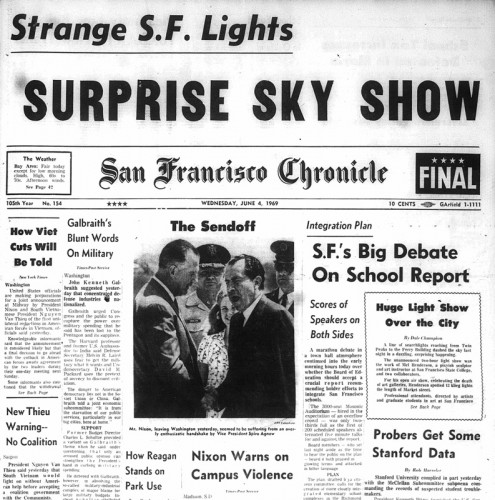 The media coverage connected this “celebration of the death of galleries” (San Francisco Chronicle) to the light shows and happenings of the sixties. For many it resonated more broadly with creative protest strategies during the Vietnam war era. Searchlights have been used by the military both in victory parades and as tactical devices during nighttime attacks. Henderson had served as an Air Force fighter pilot during World War II before receiving his art education at California College of Arts and Crafts and Mills College. As a veteran for peace, he made several antiwar works over his lifetime as well as more playful expressions of the right to peaceful assembly.

Henderson, Hawley, and Young continued their collaboration with other projects that received media attention throughout 1969. A planned three-phase event on June 15 — their first exploration in the San Francisco Bay using yellow, nontoxic uranine marker dye (an air/rescue tracer used by the Coast Guard) — intended, first, to highlight an invisible four-mile stretch of the territorial fishing water border; second, to mark an X over a designated submarine operating area during a regatta; and third, to whimsically attempt coloring a cloud. In September the artists more famously wrote “OIL” on the water near refineries along the bay. On November 19 they returned to the streets to saturate in yellow the six-sided intersection of Castro and Market streets through a joyfully disruptive congregation of 100 participants, all arriving at eleven a.m. in yellow cabs. (Some even brought yellow flowers and balloons, and festooned the area of the traffic jam with yellow toilet paper.) The film documentation, which I have shown here, reflects the different camera perspectives of student participants. Inherent to their projects was a new awareness of working on a different level, as Hawley observed then: “We’re not dealing with material in an intimate way, but on a larger, communal scale.” Elements of surprise for the artists, not just the audience, were an aspect of these events. Young, who also improvised drawing a spiral form on the water, noted, “We can’t predict what the visual experience will be for people — the scene depends on their taking part in it.” 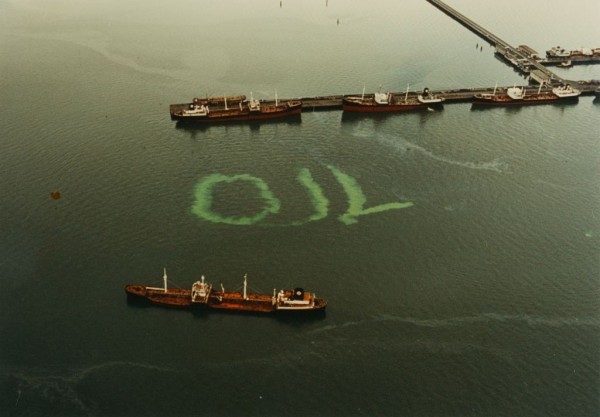 In addition to independently organizing public works, Henderson participated in a number of key exhibitions in the 1970s with outdoor or off-site performances, from casting projections on the Oakland Museum building for The Pollution Show (1970, with Young and John Altman) to presenting a multiple-video presentation of his projections on buildings in the Mission neighborhood for The Eighties (1970) at Berkeley’s University Art Museum.

Henderson was first known for his sculptures in various media that invited the touch, and he had received the inaugural SFMOMA SECA Award on the heels of his participation in the landmark Funk (1967) exhibition at the UAM in Berkeley. His break from making object-based work in the gallery context and the debut of his high-profile events in 1969 precipitated SFMOMA’s creation of a short-lived grant, the SECA Vernal Equinox Special Award, for conceptual work in the public sphere, which was first awarded to his students Howard Levine and Bonnie Ora Sherk for Portable Parks I–III (1970).

SFMOMA later organized a series of off-site, outdoor works as part of the museum’s presentation of America 1976, a landscape-themed traveling survey. Installation and Performance Pieces: Golden Gate Recreation Area (1977) included Hawley and Henderson’s nighttime performance Surf Line (1977) and Bay Area artists Peter d’Agostino, Suzanne Hellmuth and Jock Reynolds, and Dennis Leon. (This SFMOMA commission series has to an extent been eclipsed over time by (H)errata, a series of performances by women artists at the same locations, organized under the auspices of the Floating Museum to draw critical attention to the gender disparity in local museum exhibitions.)

In light of SFMOMA recently returning to the Golden Gate National Recreation Area as part of our off-site exhibition program, I spoke with Hawley about this lesser-known collaboration. Following our phone conversation, he invited me to the Beach Chalet bar at sunset. Surf Line had been held along the Ocean Beach Esplanade, directly in front of the Beach Chalet across the Great Highway. His friend Lou Lopez brought to share with us his 16mm film documentation of this nighttime event, one of several of their works he recorded. It includes footage of the artists gathering with their friends and SFMOMA audience members inside the Beach Chalet’s former downstairs tavern — which was at the time run by the Veterans of Foreign Wars — surrounded by WPA murals. The artists regularly frequented and brainstormed ideas there, observing the landscape over time. 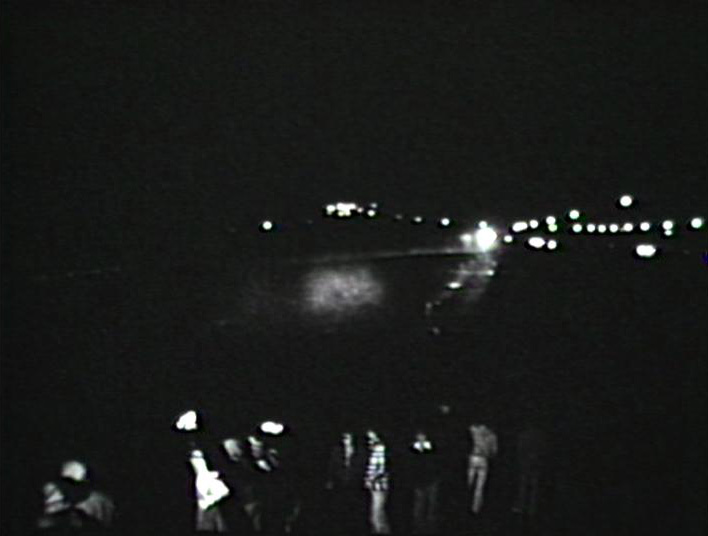 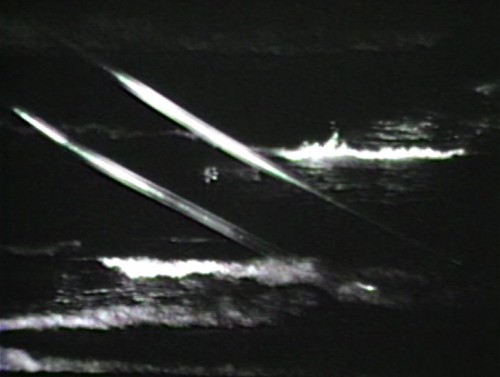 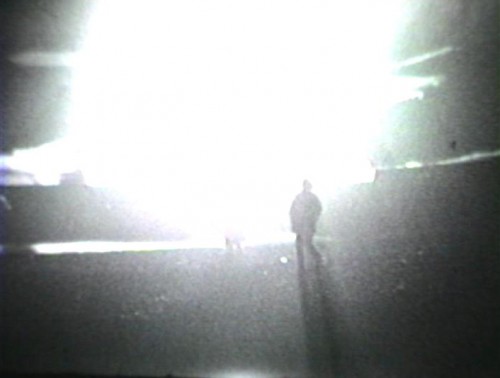 Oil (1969) had anticipated the January 19, 1971, Standard Oil spill, in which two tankers collided in the fog underneath the Golden Gate Bridge (the same vessels coincidentally pictured in Campbell’s aerial view photos) and released 840,000 gallons that devastated the coastal environment. Surf Line acted as an epilogue to the ecological disaster; the event reflected on the eerie aesthetic beauty of the beacons of lights used at night for cleanup crews pitching straw along the beach. Surf Line also wed Hawley’s interest in polyethylene tubing with Henderson’s continuing use of searchlights in nighttime works such as Skyland (1970–71, with Campbell, Hawley, Altman), Spacelight (1975), and Search Light Project (1988), among others.

The Oakland Museum’s Public Sculpture/Urban Environment (1974) had included a similar off-site “Environmental Events” section, featuring Henderson’s corridor of Christmas lights on rooftops of homes bordering Interstate 580 in support of prison reform, and other temporary works by Melinda Barbera, Judy Chicago, and Jim Melchert to “expand the traditional concept of sculpture,” in the words of curator George W. Neubert. 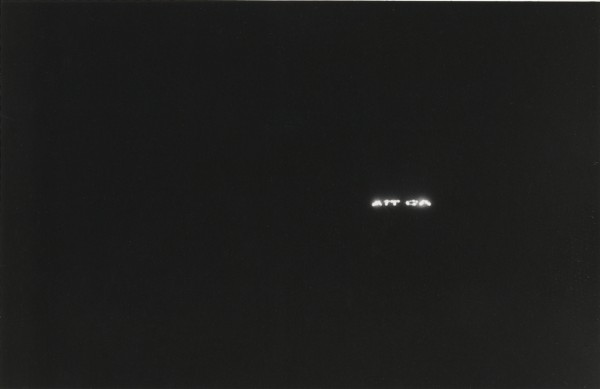 Henderson’s commitment to raising critical awareness of the injustices of the prison system extended through a series of works over three years related to the Attica riot in 1971. On the eve before the opening of The San Francisco Performance (1972), a group show guest curated by artist and Museum of Conceptual Art Director Tom Marioni at the Newport Art Museum in Orange County, Henderson had spelled out “ATTICA” in Christmas lights on a hillside. (He and Paul Kos, who assisted him, were both arrested for trespassing on Irvine Company property, reinforcing his criticism.) Hawley and Susan Rannells, Henderson’s wife, executed the same event simultaneously in the Bay Area. Artist Peter VandenBerge would likewise stage an Attica action in Sacramento on November 14, 1972, while Henderson, in cooperation with the Prisoners Union, organized forty-three participants — wearing boards of black-and-white flags and carrying crosses — to form a triangle over a forty-three-block area in San Francisco, symbolically gesturing to the number of men who had been killed during the uprising. Henderson’s Attica piece for the seminal All Night Sculptures at the Museum of Conceptual Art (October 11, 1973), where he had frequently participated in shows, featured forty-three candles and three searchlights.

From planting words like magic beside a freeway on-ramp to creating mirages of cardboard cows, Henderson oriented several works along transit corridors for primarily a commuter audience. The artist himself experienced the regular monotony of the long drive to and from his home in the Sierra foothills to his studio and teaching position in the city. As Marioni observed in 1972, Henderson had become a gold miner and farmer in the countryside, spending “a lot of time erasing the X’s on trees that were slated to be cut down by loggers and presently growing vegetables in controlled color patterns. The entire process of growing things and living in a primitive state is the subject of his work as sculpture.”

Throughout his life, Henderson remained deeply connected to the land and concerned with land use and social justice issues. His pioneering collaborative actions with several different artists and hundreds of students have primarily been discussed in relation to early Conceptual art and performance activity in California. While several of the key artists associated with Land Art had relocated from the Bay Area to New York by the late 1960s, Dennis Oppenheim’s hillside earthworks in the Bay Area and elsewhere perhaps shared the most affinity. In a San Francisco profile on Henderson’s COW Line (December 5, 1976) spanning Interstate 80 from the Bay Area to Donner Summit, the reporter wryly noted, “his ‘running cows’ will outrun Christo’s billowing 24-mile fence, which several weeks ago caused a flurry through the farmlands of Marin and Sonoma counties.”

Environmental work and sculpture dealing with place became better supported in the Bay Area in the 1980s with the founding of private foundation and nonprofit residency programs. Henderson created the first earthworks sited at the Djerassi Resident Artists Program in Woodside, including Solstice Cave (1984–86). In the month leading up to the Iraq War in 2003, Henderson made one of his last major hillside statements at Djerassi: an affirmation of the importance of gathering friends together to advocate for peace.