Our regular feature Collection Rotation, in which a guest organizes a mini “exhibition” from SFMOMA’s collection works online. This fall artists with Bay Area ties take over the series. In addition to their rotations, we asked each artist to answer poet Robert Duncan’s request to students in his 1958 Workshop in Basic Techniques and provide us with a set of influences for their work — a “constellation of their genius.” Today, please welcome Amanda Kirkhuff.

I was recently invited by Open Space to ponder “the constellation of my genius” and to create a map of my influences. This led me to examine the terminology associated with the artists and icons who have inspired me and my own artwork. I have long taken issue with the term “genius.” It takes a community to shape ideas, artistic or otherwise, and the word “genius” implies that one came up with one’s ideas alone. To me, geniuses are the white men who stole or helped cultivate ideas from their marginalized counterparts, and were subsequently awarded all the credit. This does not describe the agitators, queers, and outlaws from whom I draw inspiration. In short, the term “genius” is a linguistic tool that, used in a systematic fashion, reinforces institutionalized oppression. 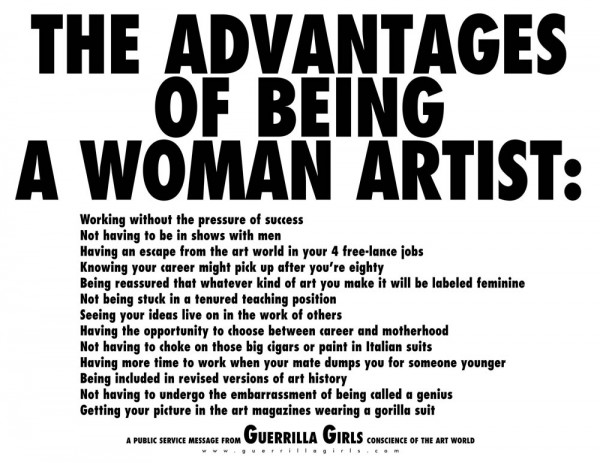 The (Merriam-Webster) dictionary definition of the word describes a genius as having “natural inclinations” and “transcendent mental superiority.” These descriptors remind me of outdated anthropologists measuring the skulls of different ethnicities. Or ethnic cleansing. When we blame nature for something, we are removing our accountability. We are no longer culpable for the power that results from granting such titles (or the loss of power for those who are denied them). What we miss in the definition of genius is the concept that no idea is truly new. Or that intellectual prowess and the dissemination of one’s ideas are usually the result of good social resources, like education, not a gift from God. Genius is not just a term, but a social title. The most important thing about this may be who bestows the title, and who receives it. For instance, the word has a masculine implication, at least anecdotally, because widely recognized examples of women geniuses are so rare. Few female geniuses means fewer female role models, and role models are a social resource. This example shows the cycle of oppression in action: the title of genius is bestowed upon men, who in turn have a deeper well of social resources by way of strong role models, and are offered a better shot at cultivating their own intellectual traditions.

The art establishment, the gatekeepers of art history, have aggressively redacted the names of female and minority artists from that history. The disproportionately small number of female artists represented in museums and solo gallery exhibitions proves that this system is still robust.

Guerrilla Girls, Do Women Have to Be Naked to Get into the Met Museum?, 2011. Courtesy www.guerrillagirls.com; Copyright © Guerrilla Girls

There is an epic history of work being pilfered from the disenfranchised, resulting in a dearth of role models for entire social groups. Artemisia Gentileschi’s Susanna and the Elders was famously misattributed to her father until the 1970s. While Orazio Gentileschi was a fantastic painter, his handling of the secondary female sex characteristics was awkward. (They say everything is a self-portrait.) Basically, he was awful at rendering boobs, and comparing the two figurative styles betrays the identities of their respective authors.

Artemisia Gentileschi is a very well-known female figure in art history. Besides her, there are few household names. The lack of female artistic role models has made it difficult for me to map my influences. I frequently find myself consuming art in an appropriative way, plucking parts of artworks that I enjoy out of the whole. I find myself wishing there were more women who painted like John Currin. The paintings are so well executed, they have such lovely craftsmanship, yet from a feminist perspective the content is horrifying. It’s enough to make me want to kill a man. 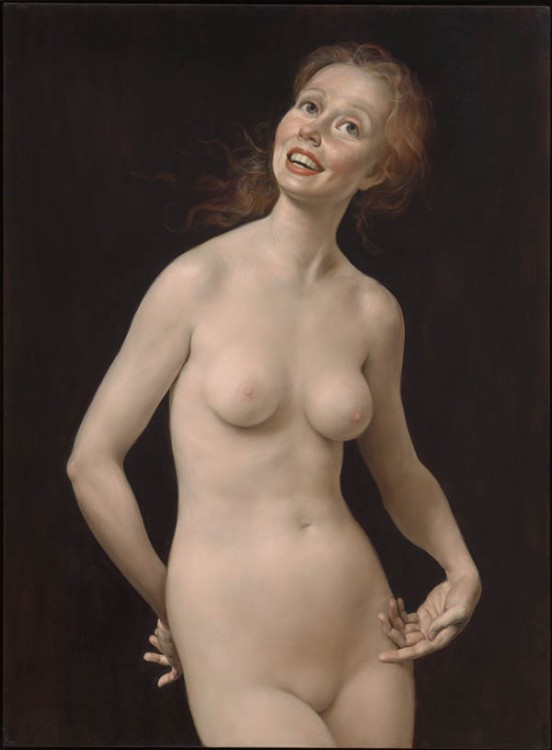 Or I fantasize that Tom of Finland would have welcomed me and my queer friends to party with him at the Eagle beer bust, instead of casting an invisibility cloak over all women who crossed his line of vision. 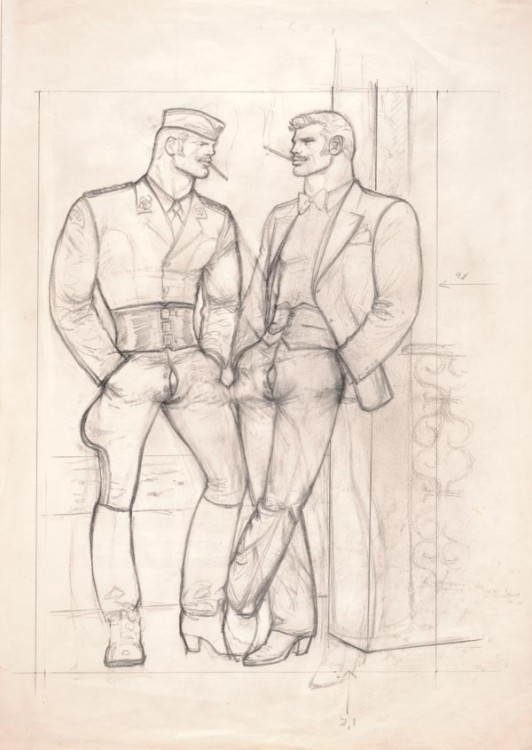 A lack of, or exclusion from, tradition can lead to a degree of liberation. Rumor was that after Artemisia Gentileschi took a man who had raped her to court, her artistic career was altered in an unexpected way. Because of the damage the rape did to her social standing as a “lady” (or whatever), she was able to take artistic risks that female painters were not typically allowed. She was able to use actual nude female models in her paintings, and depict subjects considered off limits to women. Sometimes, having nothing to lose is freedom. 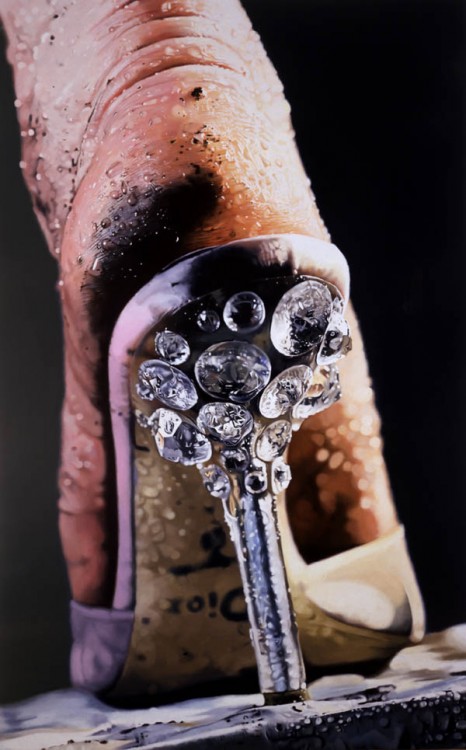 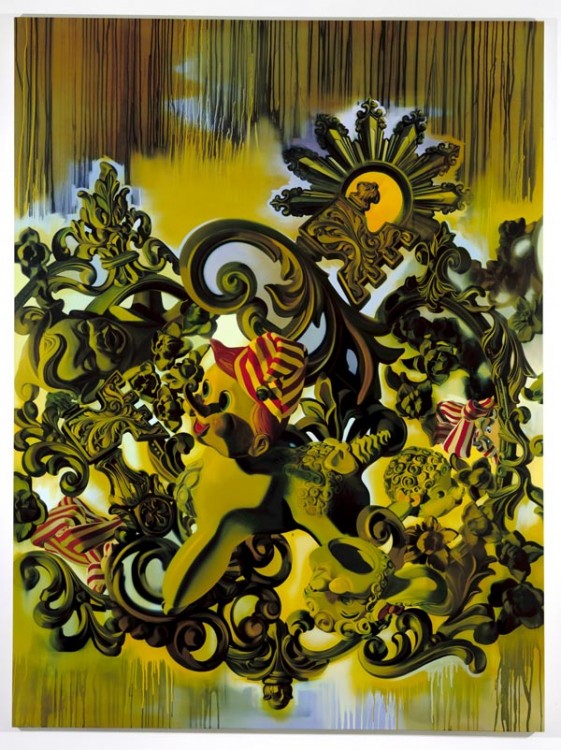 Brett Reichman, A Painting That Tells a Story, 1997 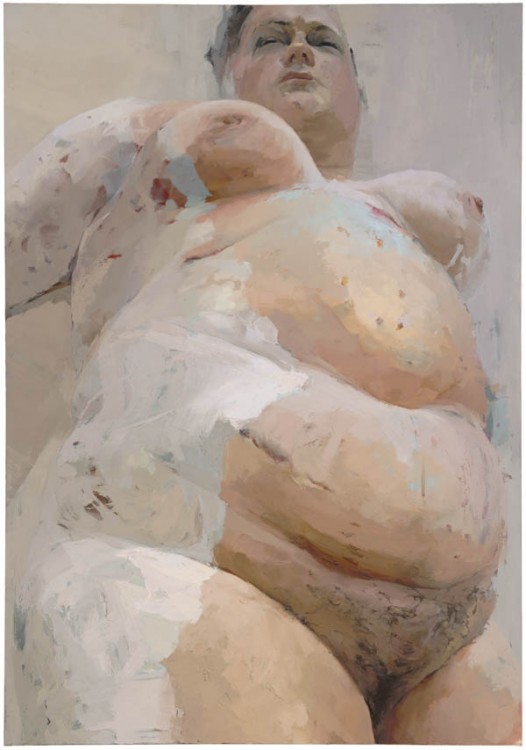 Marginalization produces outlaws. And we are in it together. We are not standing on islands of our own genius, we are collaborating. This is how new ideas begin.

“Unless they are paying your bills, you pay them no mind.” — RuPaul 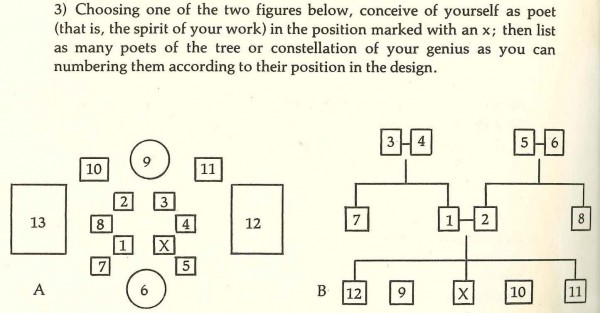 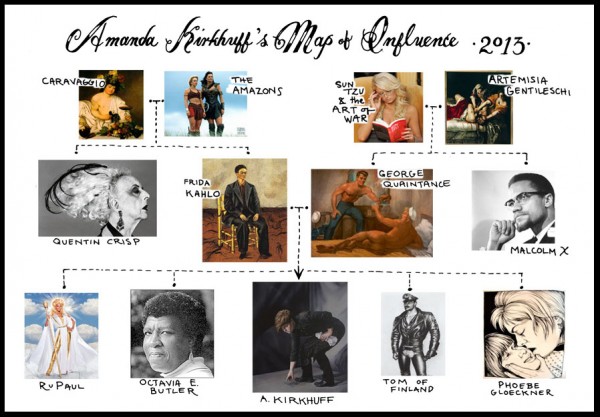 Amanda Kirkhuff was born in 1982 in Seattle, Washington. She graduated with a BFA from the San Francisco Art Institute in 2006. Kirkhuff currently divides her time between the West coast and New York City, and is represented by [2nd floor projects], San Francisco.