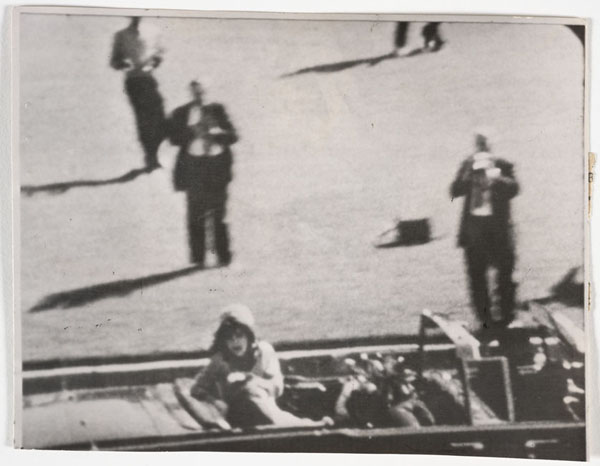 Where were you on 9/11? Those of us who lived through that day will always remember where we were when we first heard that a plane had struck the World Trade Center. We were also witnesses to the event’s subsequent exploitation by politicians and commercial interests; who can forget the vendors that quickly popped up at Ground Zero, or the ghoulish and fraudulent TV ads for commemorative coins struck from silver retrieved at the site? These co-options are a rebuke to the experience itself, a flattening of its many layers into distorted, if more easily transmissible, sound and image files.

Where were you when you heard that John F. Kennedy had been shot? If, like me, you belong to a younger generation, your answer to that question is probably less straightforward. Maybe you learned about it from an episode of Quantum Leap, from Oliver Stone’s JFK (1991), or from Don DeLillo’s novel Libra (1988), in which case the Kennedy assassination is entangled in your mind — as it is in mine — with the conspiracy theories that proliferated around it. The event feels distant, hopelessly mediated, steeped in uncertainty. And yet, what artists who lived through the assassination have shown us is that these conditions pertained even then, in the months and years following November 22, 1963. 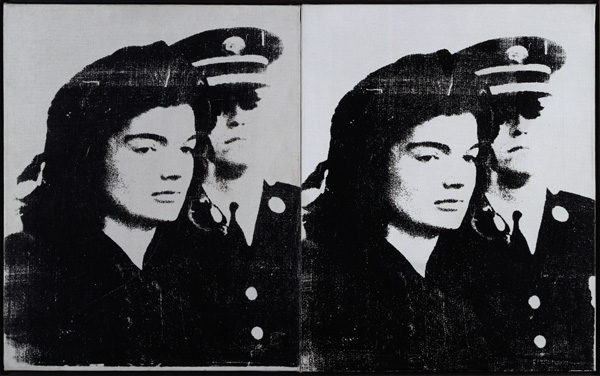 Kennedy’s first birthday following the assassination was marked by the release of a commemorative stamp. His visage is juxtaposed with an eternal flame and encircled by words he spoke at his 1961 inauguration: “…And the glow from that fire can truly light the world.” A fragment of the stamp is visible in a lithograph by Robert Heinecken, part of a series of photograms that eerily combine the fronts and backs of pages he carefully selected from magazines and newspapers between 1964 and 1968. All of the obfuscating elements of the print, including fragmentation, tonal reversal, and the stamp’s strange intermingling with the image on the opposite side of the page, are encompassed in the text fragment at bottom left: “Kennedy?”

Andy Warhol’s elegiac portraits of Jackie Kennedy make similarly effective use of found imagery and photographic reproduction. In an extension of Warhol’s familiar practice of interrogating the nature of celebrity through a manipulation of its codes of representation, they commemorate the president’s death through the life of one he left behind, and challenge us to find presence in absence and vice versa.

On the day that the Kennedy commemorative stamp was issued, Bruce Conner, who was living in Brookline, Massachusetts, at the time, found himself alone at the house where the president had been born while crowds flocked to his grave at Arlington National Cemetery and to the site of his murder in Dallas. Conner later told the participants of a film seminar: “That impressed on me that I had some responsibility there. It appeared that I was the only person who would relate to President Kennedy in this way.” He responded with REPORT (1963–67), which he created using the limited radio and television material that was then available (only selected frames from the Zapruder film had been made public, in the pages of Life magazine). The film’s powerful use of flicker, its stuttering pace (Jackie reaching again and again for the door of the ambulance), and its strategic use of found and stock imagery (a bullfighter being gored, a woman at a computer console hitting the “SELL” button) chronicle Conner’s efforts to come to grips with the tragedy at precisely the moment it was being transformed into image and instrumentalized as spectacle. His struggle extended even to his conviction that once he completed the film (if only he could defer it for a little bit longer), he would have participated in the kind of exploitation he condemned, and Kennedy would be “as dead as they had made him.”

In attempting to understand the profundity of Heinecken’s “Kennedy?” those of us too young to remember that event might ask our own version of the question: “9/11?” The answer, Heinecken, Warhol, and Conner seem to suggest, won’t be found in the kind of media hype that has accompanied the fiftieth anniversary of Kennedy’s assassination this month. Instead, we might turn to the many living witnesses and ask what it meant to them.

Rachel Federman is an assistant curator of painting and sculpture at SFMOMA.