The League of F.A.M.E. (Fantasy Art Market Enthusiasts), just wrapping its inaugural season this month, is a participatory art project by “Commissioners” Josh Pieper and Tim Sullivan, based on fantasy sports leagues. The first season, which launched on Open Space October 1, involved nine players “drafting” rosters of any ten artists, living or dead, and vying for points in four rounds of competition, on a quest for bragging rights and simulated art world domination.

Before competing, each player named their team something personal and irreverent, in the grand tradition of fantasy football and baseball teams across America since the 1960s. Robert Shimshak’s “COCO-BOB” may arguably have been the only local sports reference amongst the league’s team names, although allusions to base-stealing prodigy Coco Crisp may seem more obvious to fans of the Oakland A’s than to fans of the overrated Giants, or to the art world, for that matter. At least from the blog posts documenting the season, this group of competitors seemed relatively free from the bickering and intense personal rivalries many fantasy leagues experience, although how much trash talk went on behind closed doors is anyone’s guess (this characterization is entirely based on FXX’s dark comedy The League — a meditation on trash talking, now in its fifth bleak season, depicting male friendships as abusive struggles and women as problematic interlopers in the masculine space of sports fandom).

To remain plausibly impartial, Pieper and Sullivan selected contest criteria randomly, pulling slips of paper or 3-D letters out of gallery paint buckets and posting short video “replays” to Open Space, incorporating both the ephemera of gallery maintenance as well as the media conventions of sports television into the League’s web presence. Art contests at county fairs and university galleries typically rely on the subjective taste of esteemed judges to determine winning entries qualitatively. But to emulate fantasy sports, the League of F.A.M.E. needed to compare artists quantitatively. Therefore the winning team each week would be awarded somewhere around forty-five F.A.M.E. points — because, the Commissioners must have reasoned, forty-five is as good a number as any other when solving the absurd problem of assigning  competitive significance to #hashtag occurrences of artist name vs. total Ebay dollars traded in a given week. Although not as esoteric as the point schedule for Advanced Dungeons and Dragons or Olympic gymnastics, Pieper and Sullivan’s system still allows the proceedings to be both standardized and opaque, maximizing suspense. 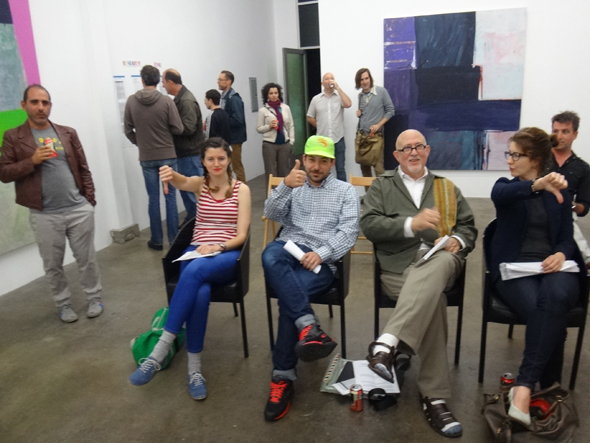 The first round of F.A.M.E. competition counted the number of ads for each artist to be found in the February 2013 issue of Artforum. Comparing artists’ presence in high-profile print media feels like an intuitively valid way to assess their mainstream notoriety, and counting advertisements conjured the right mix of gallerist striving, calculated museum endorsement, and commercial viability to get the league started off on a cutthroat foot. Familiar, accomplished, “blue chip” art stars like Ed Ruscha, Louise Bourgeois, and John Baldessari carried the day, confirming that they are indeed very famous artists, and that the League of F.A.M.E. system was calibrated and working.

Weeks two and three ventured into murkier territory. As any social media manager can attest, hashtagging is an inexact science, skewing toward a fickle, young audience who may not yet have the education or experience to appreciate subtle, content-driven, or formally challenging works of art. This is the only explanation for James Franco, apparently the A-Rod of the art world, singlehandedly beating Ryan McGinley, Gerhard Richter, Mike Kelley, the aforementioned Baldessari, and Richard Prince — combined — in hashtag counts.

Similarly, the online auction wilderness Ebay is a populist forum, and for week three’s competition, the Commissioners avoided the vexing collector’s dilemma of authenticity in online sales by counting knock-offs and original works alike. Players tinkered with their rosters to maximize competitive edge, including names unlikely to appear often in Artforum, but highly likely in the Ebay universe — artists such as Beatrix Potter, M.C. Escher, Thomas Kinkade, and even Walt Disney. Bona fide art stars William Kentridge, James Turrell, and Christian Marclay, amongst others, failed to make it on the leader board at all this round, prompting this koan of a question: Are they not on Ebay because they’re “high art” or  are they “high art” because they’re not on Ebay? 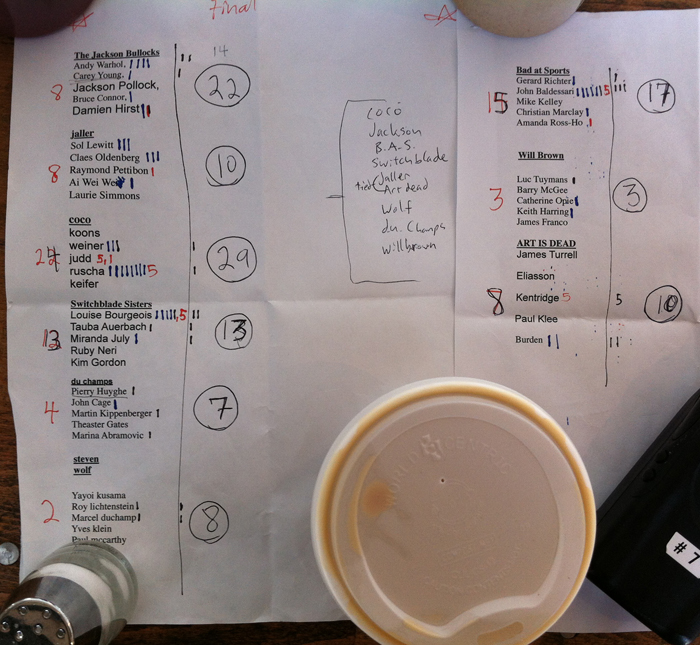 Competitions two and three seemed to privilege short-term Warholian fame over the marathon task of deeper accomplishment, but also drew attention to the disparity between canonical, art-world fame, versus true, powerful mass appeal, as kitschy as it may smell. This disparity throws the League’s players a curveball, but makes the overall project more compelling.

As with any sports narrative, there are lessons to be learned from F.A.M.E.’s code-switching exercise. First, it’s the parallel construct of an art star and a sports star that makes this game possible. Both artists and athletes are deified as individual, talented geniuses, and our culture tends to mythologize biographies of success around highly visible achievements. The construct of fame happens regardless of the class- and ideology-based Red State/Blue State cultural divide, and it’s this similarity in otherwise unrelated subcultures that makes a fantasy art league such a humorous appropriation.

Secondly, women are clearly contenders in the fine arts arena, with the only all-women artist team trailing the first place team by just five points. The final week’s competition counted appearances in a handful of art blogs, and Carrie Mae Weems and Suzanne Lacy propelled Sarah Hotchkiss’s Switchblade Sisters to their first win of the season — over the likes of Banksy, Picasso, and Chris Burden. No matter that the criteria was necessarily arbitrary and that flattening out the holistic “competitiveness” in the art world to fit with sports-based models of competition is funny but not intended to hold up to rigorous scrutiny. This late-season feminist victory demonstrated the democratizing power of web publishing. Who wants to field the Guerrilla Grrls next year? We’re in this. Not like with the WNBA, but like Danica Patrick. In it. 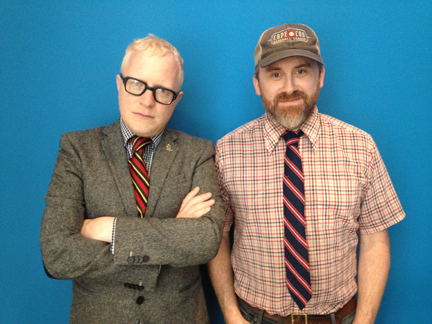 Finally, like many sports narratives, some issues are left unresolved. Over four rounds of heated competition, who would be the mythical “Rudy” of F.A.M.E.? Who would be the underdog with heart that just won’t give up? Would it be #SWOON? Terry Richardson? Do these analogies produce punch lines or interesting meanings? Such heady questions may have no definitive answers, but the League of Fantasy Art Market Enthusiasts created a situation where your best guess can be put to the test.

Mary Anne Kluth is an interdisciplinary artist. Her work has been included in  exhibitions at the Contemporary Art Center, Las Vegas, the San Jose Institute of Contemporary Art, and the Museum of Art and History, Santa Cruz, and has been featured in ARTnews, Beautiful Decay, Squarecylinder, Visual Art Source, Harper’s, and elsewhere. Kluth has written catalog essays and has contributed to Art Practical, Artweek, Art Ltd., and Stretcher. She is represented by Gallery Wendi Norris in San Francisco.