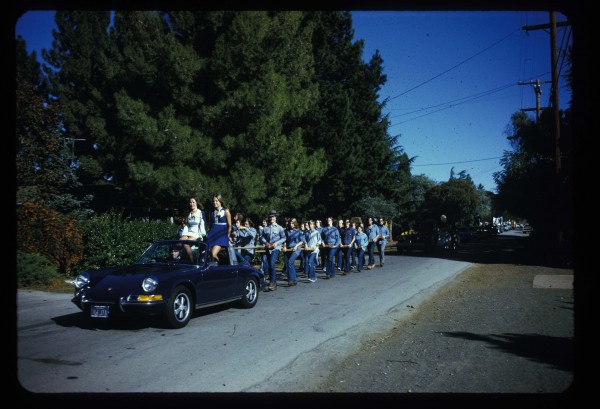 From November 9, 2013, through March 2, 2014, SFMOMA takes over the small suburban city of Los Altos with newly commissioned and site-responsive projects from contemporary artists, historical works, and documentation. This is the first of several posts that will highlight issues, artists, curators, and spaces relating to Project Los Altos through conversations with the project’s contributors, as well as those outside of SFMOMA’s remit. Today, Charles Garoian, the 1974 SECA Award winner and Los Altos High School art teacher from 1969 to 1986, speaks about his students’ 1974 performance, Drill Team — documentation of which will be on view at 359 State Street, Los Altos — and reflects on his seventeen years teaching a performance-focused art curriculum in Los Altos. What follows is a series of quotes from Charles Garoian, taken from our conversation on October 25, 2013.

I applied to a teaching ad in my college placement office. I didn’t even know where Los Altos was, but I ended up staying there for almost seventeen years!

I discovered that the performative experiments that I was doing in my studio were beginning to make sense in the classroom. Teaching at the high school became kind of a laboratory. We used performance art to riff off of traditional studio practices and historical works of art.

It didn’t get to the point where I was going to lose my job because what I was doing was teaching art as I was supposed to and my students were creating visually and conceptually compelling art works. It was desirable to be in my classes because we were constantly challenging academic and institutional ideas and images.

During the first semester of every year we would have back-to-school night, and parents would come by to find out first hand what sort of “craziness” was going on in Charles’s classes. I told them, “We’re going to be asking some big questions.”

If there was a sense of community it was always emerging and changing; one that had a kind of abstract character. We didn’t have an established organization; it was more like a movement. 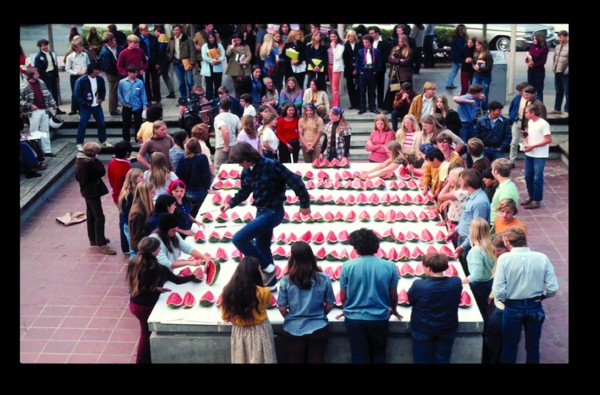 Often when we did our performances, they were unannounced, and whether they were announced or unannounced, they were disruptive. There was a flow of students coming in and out of the campus and we were in the way.

After three, four, five years of experiencing our performance interventions, they asked me to repeat some of the events. They wanted me to do Drill Team every year and I refused on the basis that it would then become institutionalized, and the whole idea was to challenge institutionalized assumptions and practices about art and life as they emerged from my conversations with the art students.

The jocks and the misfits.

Students in my classes knew they were not the “jocks and the pep girls”; they were perceived and often labeled as misfits. Some of them were doing drugs; some were skipping out of school. But they saw the opportunity in art class to bring their own personal explorations into the classroom and manifest them in different ways.

I remember, one time, students walked into my classroom after lunch and I could smell that they’d been smoking marijuana, and it really pissed me off. I said, “Remember what Dali said: I don’t take drugs; I am drugs.”

My sculpture students came up to me and said, “Hey Charles, we’re thinking about doing a prank at the homecoming parade, will you join us?” I said, “Absolutely not, but if you’re interested in doing something that is intelligent and that at the same time invokes some kind of humor or parody, then I’m willing to go along with that.” 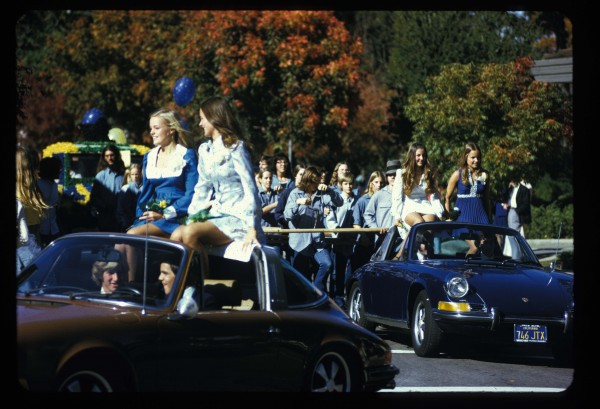 We started to brainstorm and decided to create a float for the parade. We entered ourselves as a walking float. The day before the homecoming parade, we got together at dinnertime in my class. At midnight we were out on the football field doing drills with me calling cadence: “Hup one, hup two, hup three!”

Inspired by the visual puns of artist Bruce Nauman, we decided to play off of the idea of the Drill Team, the flag-waving girls of the marching band, but we would be carrying and operating hand drills; drilling into 2-by-4s and wearing work clothes, so we were labor.

The vice principal was in charge of organizing the parade line. It was fairly clear that he got a laugh out of it but he kind of wanted to get us out of the way as soon as possible. There were three brand new Porsches with prince and princess candidates riding in them, and he put us right behind them, so the contrast between the so-called jocks and the misfits was amazing!

Artists don’t represent spaces, they create spaces. No matter how confined, how narrow, the artist always finds that space in-between. That space in-between that then begins to create movement . . . that enables seeing and thinking in new and different ways. 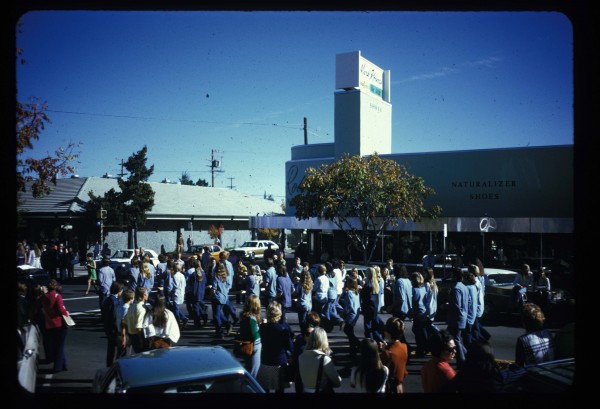