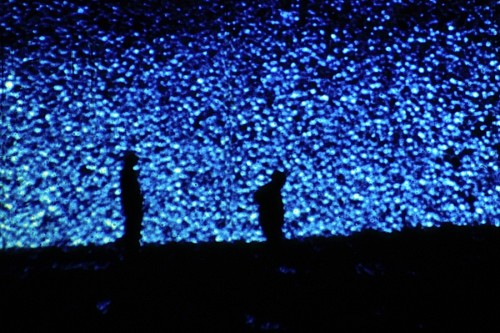 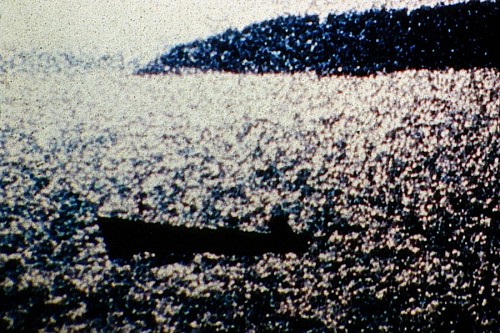 The surface of Remains to Be Seen, by American filmmaker Phil Solomon, is crinkled, decomposing, brightly variant, at times lit with a thousand tiny fires, and often blue. His treatment of the film stock achieves a kind of bas relief of the screen. Light, movement, and color seem to have been chipped into pieces, and recompose into a tight, moving sculpture. During the course of a leisurely bicycle ride, the bicycle disappears into a crinkling foil background and the bicyclist magically floats across the screen. In another shot, saturated waterfall imagery suddenly becomes a sky. Loud, rushing noise sutures shots, as birds alight across a plane of intense blue. If a narrative arc can be surmised, this is the point where the film’s hospitalized body likely dies. I scratched in my notes, the dematerialization of form into water. I thought of Beckett.

Sound is pronounced to the point of shimmering. The crackle of fire is hyper canny — isolated, elevated, and outlined. The filmmaker called the sound “convex.” Its certainty supports the crumbling images, anchors an entomophobic screen in a human world. Windshield wipers whoosh through a blue-green countryside; the disquieting iterations of a respirator pump delineate a room filled with blue-green hospital scrubs. More of a composition than a soundtrack, sounds rhyme, echo, always return to water.

I am trying to work up a theory. It starts, the dematerializing work of representation. Here, dematerialization gives rise to texture, and somewhere in there, text: structure, network or weave. The filmmaker addressed another project, “the treatment is the critique.” In Remains to Be Seen, the treatment of the film surface is the emotional content, recomposing into its own sculptural presence.

During his mother’s last days, he shot footage continually but was unable to use it — he said this piece came instead. One sound, he explained, was composed of the reverberation of a song, with the music taken out entirely. 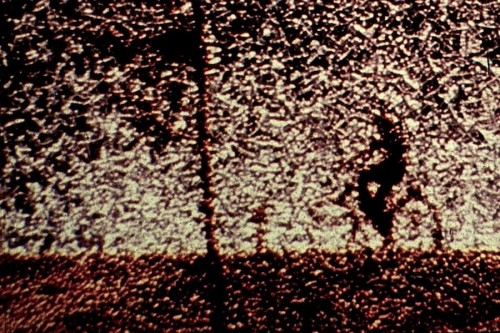 All stills and clips from Remains to Be Seen, courtesy of Phil Solomon

Phil Solomon has been the recipient of a Guggenheim, the Thatcher Hoffman Smith Award, and the Knight Fellowship of the United States Artists. In 2010, the Corcoran Gallery of Art commissioned a six-projection installation, American Falls. Remains to Be Seen was picked by Stan Brakhage as one of the ten greatest films of all time, and was selected as one of the top ten films of 1989 by the Village Voice. He was recently in attendance at screenings organized by the San Francisco Cinematheque and the Pacific Film Archive.