Oakland’s Joyce Gordon Gallery has been located at 406 Fourteenth Street near the City Center BART station for a decade now, showcasing emerging local artists as well as internationally renowned painters such as Raymond Saunders and Richard Mayhew. Joyce Gordon is celebrating her first decade with a notable group exhibit that has been showing in the month of September and will be up until October 26. 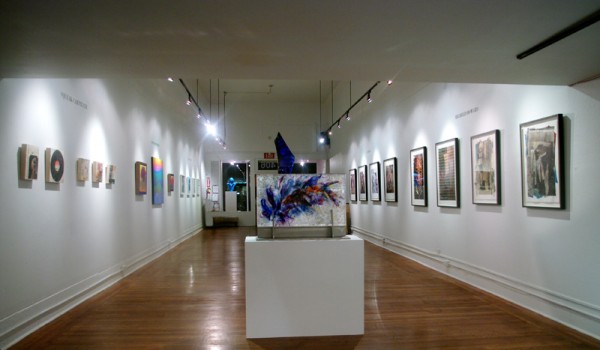 Joyce Gordon Gallery’s Interior for the ThEN is Now Exhibit

Fourteenth and Broadway has always seemed to be the center of downtown Oakland’s hub because it is walking distance from iconic Oakland landmarks like the Tribune newspaper building and City Hall. The roster of artists in this show is exemplary of what has historically been Joyce Gordon’s dynamic range of tastes and interests in art expressed by artists residing in Oakland — arguably the most diverse community in the country. The ten-year anniversary show ThEN is Now features artists Stevens Jay Carter, Squeak Carnwath, Enrique Chagoya, Chukes, Dewey Crumpler, Mildred Howard, Hung Liu, Richard Mayhew, Mel Ramos, and David Ruth. 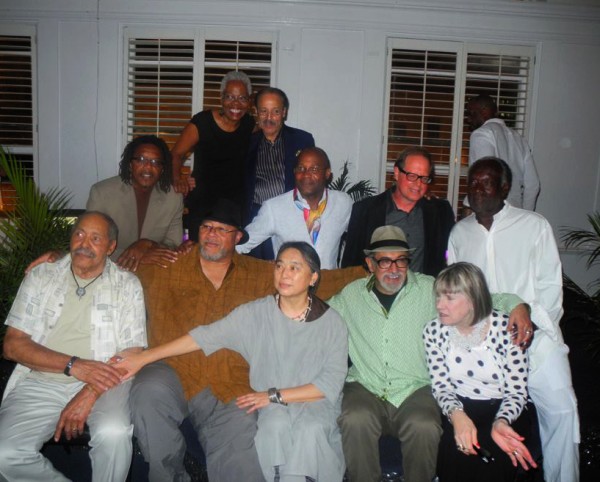 The participation of such a diverse array of world-recognized artists is an indicator of the respect that Joyce Gordon Gallery has garnered over its ten years in existence and the talent of its current co-curator Eric Murphy. In addition to the high caliber of work showing throughout the month of October for this anniversary, Oakland’s mayor Jean Quan has honored Ms. Gordon by recognizing September 6, 2013, as Joyce Gordon Gallery Day and Congresswoman Barbara Lee has issued a certificate of Congressional recognition to Ms. Gordon to help mark this milestone. Mayor Quan attended one of two gala anniversary dinners given at Geoffrey’s Nightspot in order to present the certificate in person.

Joyce Gordon Gallery is situated just below Geoffrey’s — the longtime Oakland nightspot known for hosting famous athletes, recording artists, and political figures. I can recall hearing the legendary actor/activist Harry Belafonte there in a particularly impressive and interactive audience conversation several years ago. In keeping with the tradition of hosting world-famous figures at that location on Fourteenth Street actor and philanthropist Robert Redford attended the opening of the Joyce Gordon Gallery in September of 2003. Winston Branch, a University of California, Berkeley, art professor, curated the gallery’s first exhibit. Setting the tone for the wide cultural range of artists that the gallery would exhibit over the next ten years, that exhibit included seventeen artists from Africa, England, Germany, Iran, and the Philippines.

Since 2003 the gallery has hosted political fundraisers, lecture presentations (I first presented my series of lectures on Black visual culture there), and live music in addition to artwork by emerging as well as mid-career recognized artists. The spectrum of Black-owned galleries that have made great contributions to the Oakland arts community includes small alternative spaces like Cornelia Belle’s Black Bottom Gallery and Omiroo, but in addition to those there were Grande Oak Gallery, Stoneridge Gallery, and Samuel’s Gallery. The newer Betti Ono Gallery founded by Anyka Barber now graces downtown Oakland, J Posh Design Gallery founded by Janina Roberts is in North Oakland, and of course Thelma Harris Gallery is in the Rockridge area. All three have consistently impressive exhibits. Of all of these galleries it seems that Joyce Gordon Gallery has had the widest range of activities. This may be attributed not only to her central location for the longest period of time but also to her determination to make her gallery a cultural catalyst as well as an exhibition space.

From the standpoint of someone who has lived and participated in Oakland’s art scene for several decades I find it heartening to see Ms. Gordon recognized and her achievements documented in this manner because it is all too easy to fall into the narrative that Oakland’s art scene came of age when Oakland’s First Fridays and Art Murmur arrived. Ms. Gordon has stayed the course of her vision and enriched Oakland’s arts community in countless ways.

In 2003 Joyce Gordon’s ambitions for her gallery were clear. At the gallery’s opening ten years ago she said, “I would like the space to become home to a versatile array of cultural activity, including book signings and lectures as well as spoken word recital and, of course, always more art exhibitions.” She’s stayed true to that intent, and with this ten-year anniversary exhibit Joyce Gordon Gallery promises to be an institution that will represent Oakland’s growing arts community well into the twenty-first century.