We’re taking our Five Questions series around the office and finding out more about SFMOMA staff members and what’s changed for them now that we’re under construction. Today we’re talking to Rudolf Frieling, Curator of  Media Arts, in our new Kearny Street offices, where a lot of our staff have temporarily relocated until our building reopens. 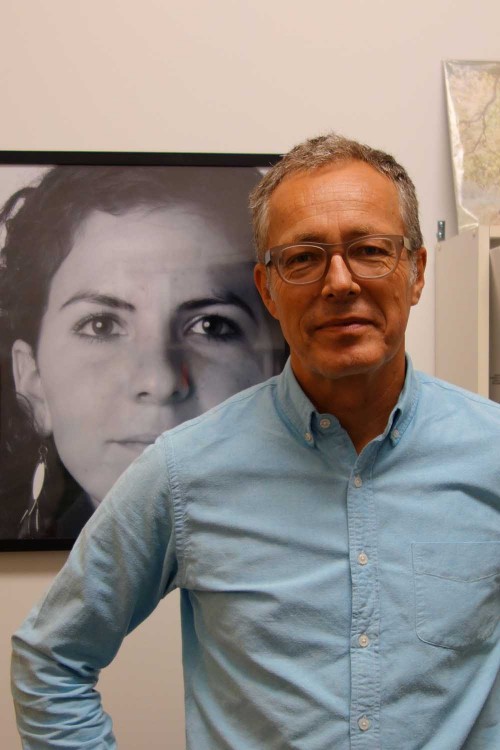 Please describe your job in three sentences or less:

Would three terms do as well? Art, media, and contemporary culture. What this means in practice is that I look at art, engage with artists, work with them on new projects, and propose art for the collection. I also organize exhibitions and develop new exhibition formats for the museum.

I don’t collect. We do have art at home, and that has sort of just happened — stuff we got from friends or found somewhere. Since I am professionally involved with collecting, I don’t want to create a conflict of interest, so I don’t collect.

An afternoon? I’d rather have an evening with one of two Irish writers — I have a love for Irish writers. The first is James Joyce. I majored in literature, writing about the work of James Joyce. His way of thinking about language has deeply influenced my thinking in general. The second is kind of a no-brainer: Samuel Beckett. I love his deadpan humor and his minimalist, recursive use of language. Both writers developed very open formats. Both writers lived in exile, as do I in a way. Both had to find a way to live in more than one language.

If you weren’t a curator, what would your gig be?

I don’t really have a favorite tool, but I do have two things I always use. The first is a simple Italian household coffee machine for my morning coffee and the second is, of course, my glasses. What would I do without my glasses? I wouldn’t be sitting here in this museum because I couldn’t see anything. They also help me find the coffee machine in the morning.

Why are you not in Italy? Why I’m not in Italy would be another interview though. But there is a very personal reason why I think I am in San Francisco. In the seventies I had an accident here with a cable car and it made me sue the city of San Francisco. The money I got eventually paid for a few trips back to the Bay Area, until I stopped for quite a while, briefly giving New York a chance and then living again in Berlin. So fast-forward two decades, when I received the gracious offer to come work here as a curator at the museum, it totally made sense to me — I felt San Francisco had always been my destiny on a very embodied, personal level.