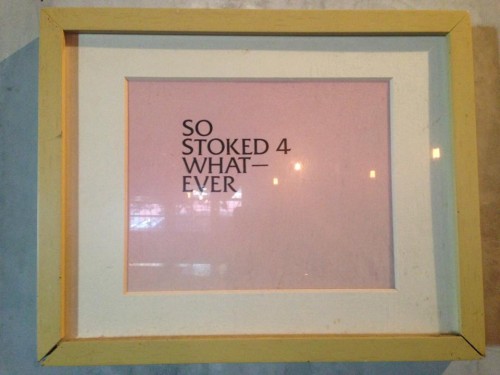 So Stoked 4 Whatever, found at Dear Mom bar in the Mission. A typically contemporary sentiment. Photo: Stella Lochman

In 2009, October magazine published a feature called “Questionnaire on ‘The Contemporary.’” The questionnaire was sent to seventy critics and curators who the editors identified as being particularly interested in the contemporary. Speaking on behalf of the other editors, Hal Foster suggested that contemporaneity (in 2009) held a peculiar and paradoxical place in the discourse of art history. According to Foster, the contemporary was marked by the disappearance of historical determinations and paradigms for different kinds of art making and reception (“postmodernism,” “neo-avant-garde,” etc.), but at the same time the contemporary appeared as a legible object for institutional analysis and critique.

One of the initial difficulties in speaking about the contemporary at all is that many would maintain that once the contemporary appears as an object to be described it is no longer contemporary. Compare this paradoxical ontogenesis to that of fashion: the idea that once something is “in fashion” it is, necessarily, out of fashion. That’s precisely the metaphor that the Italian philosopher Giorgio Agamben uses in his short essay “What Is the Contemporary?”

Agamben describes the difficulty of perceiving and articulating the contemporary. Reflecting on the history of the term from St. Paul to Nietzsche, he writes “contemporariness . . . is a singular relationship for one’s own time, which adheres to it, and at the same time keeps a distance from it.” The contemporary is always quick moving, ephemeral, difficult to “pin down.”

I was recently at a drinking establishment in the Mission that had the above framed print behind the bar. It crudely reads, “So Stoked 4 Whatever.” “So Stoked 4 Whatever” feels like the contemporary to me. There’s a way in which the slogan might be read as apathetic or ambivalent, in keeping with the omnipresence of a returned nineties. But the print seems to me to address the many forms of energetic commitment to new possibilities that have marked the political demands of the past two years. All over the world, outrageous demonstrations have arisen to challenge existing regimes and regimes of thought: dictatorial, capitalist, neoliberal. The energy of these forms of protest, which range from armed revolt and occupations to less conspicuous but powerful new visions of how we can be together, has been unmistakable. And one thing countless commentators have noted is the remarkable lack of specific demands. “Occupy Everything,” signs read in Oakland. “So Stoked 4 Whatever,” looming above the head of the bar patrons in today’s Mission, doesn’t aspire to that political imperative — probably. But it does speak to a radical commitment to possibility — whatever it may be.

This fall, nine writers will reconsider the question “What is the contemporary?” on Open Space. SFMOMA is stretching the meaning of what a “museum” is and means at the moment. Is the traditional function of a museum perhaps fit for modernity but antithetical to the slippery and constantly changing nature of the contemporary? But more specifically, what has changed since Foster’s survey in 2009? Has the contemporary become any less historically determined? Does it continue to fall outside of conventional paradigms? Has there been a new vocabulary developed to address what can’t be accommodated by historically familiar terms? Has the political urgency effected by the Arab Spring and insurrectionary praxis in the United States inflected the contemporary with a new set of questions and problems? If so, what are they exactly?

Our feature commences next Monday, September 23, with a post by Frances Richard. We hope you’ll check back as this series of responses develops through the fall.