Stop Hating on the Genius of Miley Cyrus 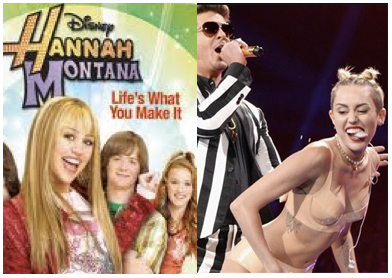 Most people don’t realize just how much Miley Cyrus has been suffocating under the international brand built by the Disney Corporation. Remember—they portrayed her as an innocent, apple pie–loving American wonder child that could do no wrong.

They invested millions upon millions of dollars in that wholesome purity—in the middle class fantasy that you can go anywhere in this country if you just roll up your sleeves and work hard.

That’s a lot of pressure to be putting on a little girl. Yet under Disney’s big black boot she didn’t even have a real name, just the brand name Hannah Montana, which was chosen because it rhymes.

In 2008, her TV series had a global audience of two hundred million viewers. According to the Daily Dispatch: “By February 2008, the Hannah Montana franchise had become so important that Disney convened an ’80-person, all-platform international meeting to discuss Hannah Montana’s future.’ All Disney business segments were represented at the meeting.”

For years they had her touring around the country with a band, playing music she didn’t even write (Miley Cyrus is no Taylor Swift!). All along the way she was fawned over and guided by her horrible-in-every-way country music star father, Billy Ray Cyrus. Then, like other young women who have been forced to sacrifice their childhoods for early fame, she faced an identity crisis.

And let’s face it, Disney didn’t want to sexualize their child star too much, since advertisers wouldn’t go for it and it would contaminate the image they’d created. Besides, did anybody really want to see a burned-out, drug-addicted 35-year-old Hannah Montana? Okay, maybe some people might have. But my point is that her fans were growing up too, and her very future depended on retaining those fans and hopefully finding a way to get more.

To rebrand meant she could potentially become a genuine crossover act. Yet, frustratingly, everyone still was associating her with the old brand—the tween child star. So what could she do?

Obviously she had to erase that association in the minds of her fans, many of whom dared not think carnal thoughts about the young girl she portrayed as Hannah Montana. And it’s exactly for that reason she almost had to do what she did at the MTV Video Music Awards. Her dirty dancing and portrayal of sex acts on stage gave her fans permission to see her as a woman.

But while Miley gets humiliation and public shaming, Robin Thicke, her bump-and-grind dance partner, is a married man and hardly got any criticism at all. He can be a horn dog and dirty dance with 20-year-old Miley, but it’s she that should be ashamed of what God gave her? Can we say double standard?

So even as the media freaked out at how she stuck her face in the rear end of an oversize teddy bear and seemed to like it, she was getting some extreme twitter love. Forbes said: “Cyrus’ performance spurred a massive wave of 306,100 tweets per minute.” Which totally crushed the VMAs from last year. By comparison the Presidential election night last year saw a peak of 327,452 tweets per minute.

So in marketing terms that dirty dance was a success.

Lest we forget, Miley Cyrus is also worth $150 million, so a lot of people’s jobs are riding on her being freak of the month.

Who knows, maybe that American myth is true after all: if you roll up your sleeves (or strip down to flesh-colored vinyl bra and camel-toe panties) and work hard (get sweaty with dancing bears under hot stage lights), then anything really is possible.