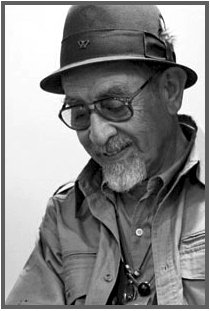 When I grew up in Sacramento, everybody knew who José Montoya was. Known variously as a poet, artist, muralist, printmaker, and teacher, he was the quintessential man about town. He was always in art shows or reading his poems somewhere. He was the guy everyone respected. Sadly, his family just announced his passing. He was 81.

When Montoya started the Royal Chicano Air Force (first called the Rebel Chicano Art Front) art collective back in 1969 with his compadre Esteban Villa, the world was a very different place.

It was a time when the American Air Force was dropping real bombs and using real napalm in its war with Vietnam. Most people had black-and-white TV sets. The hippie movement was all played out. The Black Panthers had 10,000 members and Woodstock became the most famous concert in history. That was same year humans first walked on the moon.

But back in Sacramento, Montoya and Villa were teaching art classes at Sacramento State University and that summer they probably couldn’t ignore the face of Cesar Chavez staring out from the cover of Time magazine.

With the title “The Grapes of Wrath,” Time profiled the unlikely labor leader, Chavez, and the United Farm Workers. The UFW was a huge deal in California because a lack of regulation allowed the agriculture industry to pay incredibly low wages to farmworkers, most of whom were Mexican Americans. Whole families worked the fields and existed in a perpetual cycle of poverty. Chavez was leading boycotts against grocery stores like Safeway to pressure the industry for better wages and working conditions. Montoya and Villa wanted to help.

So partly in response to the UFW and partly in response to their own marginalization as Chicano artists, Villa and Montoya joined with some of their students and other activists, poets, and artists, including Rudy Cuellar, Juanishi  Orosco, Ricardo Favela, Armando R. Cid, Eva Garcia, Lorraine García-Nakata, Juan Cervantes, and Joe Serna, Jr. (who later became mayor of Sacramento) and began producing screen-printed posters, murals, and  poetry readings.

As the Royal Chicano Air Force grew, they sometimes loaded a whole screen-printing operation into a Volkswagen bus and then went directly to farms, producing prints, posters, and pamphlets on site. Their funky combination of storytelling, understated humor, and traditional folk art combined with activist techniques to create a uniquely Californian mash-up of cultural influences.

Of course, this complex blend of interests has made it hard for art historians to categorize them, but undeniably, it was a movement. Dozens of people participated in the RCAF and exhibitions and readings  have been held all over the state. They put on fundraisers and dances in support of farmworkers and taught print and mural making workshops in schools.

Montoya was a mentor to a lot of younger artists and poets and up until not so long ago he could be found reading his poems at Luna’s Cafe & Juice Bar in Sacramento.

Born in Escobosa, New Mexico, Montoya taught at CSUS for twenty-seven years and served as Poet Laureate of Sacramento from  2002 to 2004.