Beyond Belief: 100 Years of the Spiritual in Modern Art, jointly organized by SFMOMA and the Contemporary Jewish Museum (CJM), is on view at the CJM through October 27. Open Space presents a series of posts in which invited writers explore various aspects of the exhibition. Today please welcome writer Erin Hyman.

A crouching woman hangs from the wall, muscles tense, flanks coiled like a spring, as if ready to pounce. The gallery is marked “Genesis” but there is nothing Edenic here, as we have come to know the term — no Adam, no Eve, no Tree of Life. Instead, Lilith. Eve’s shadowy precursor. Woman before the rib, before the forbidden fruit, before the fall. Artist Kiki Smith has given body to this dark and enigmatic figure who arises from a textual gap, an absence. 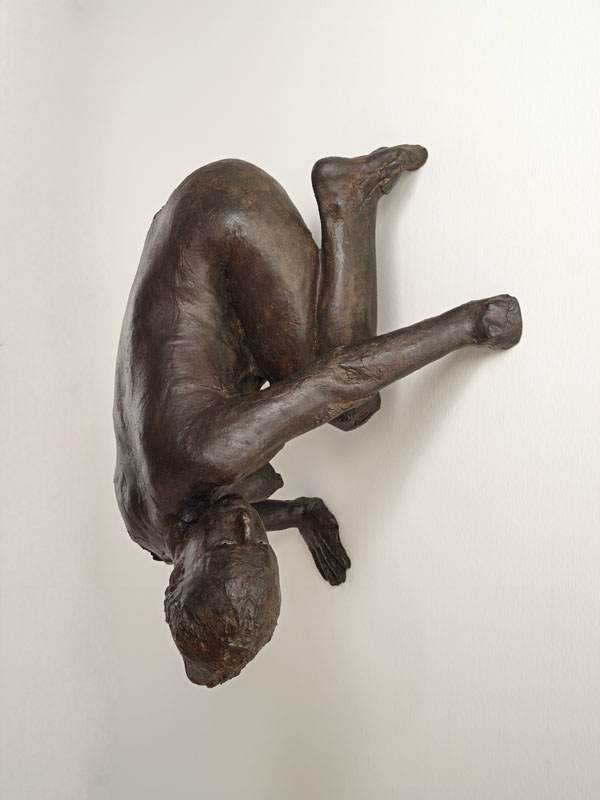 I remember clearly the first time I learned that there were two biblical versions of human creation, as a Berkeley freshman in a large Western Civ class. I had only ever been aware of the Adam’s rib version. But there it was in Gen. 1:27 — “And God created man in His image . . . male and female He created them.” The first creation makes clear not only that man and woman were brought into being simultaneously, but that the divine image implies both halves.

Modern biblical scholarship sees such instances of repetition or multiple versions as “seams,” evidence of an editorial hand, showing where different texts, perhaps by different authors, were knitted together. But the tradition of religiously devout Jewish thought going back millennia (which would find this secular/historicist take on “authorship” anathema) has responded to lacunae in another way: by elaborating midrash, supplementary stories and interpretation that fill in the gaps. Lilith derives from just such a midrashic source, which explains what happened to this first female — how she disappeared, making it necessary for God to appease Adam’s solitude by creating Eve.

Although the term lilû or lilitu is an ancient one, connoting a female demon and going back to Babylonian and Mesopotamian sources, in the Jewish tradition it was the medieval text The Alphabet of Ben Sira that first tied this older folkloric strain to the first woman in Genesis, naming her Lilith. In this text, Lilith declares her equality with Adam and refuses to be submissive to him (it actually states that she refused to be on the bottom during sex); she abandons Eden, wandering the earth enraged and wild, tormenting men, and snatching newborns from their mothers.

For an artist like Smith, who grew up Catholic and calls herself “a big Virgin Mary fan,” the choice to depict Lilith — a sexually voracious anti-maternal figure — is a provocative one. It certainly connects to the long-standing attention in her work to reinterpreting embedded cultural narratives and excavating hidden histories, particularly of female figures and their connections with animality, such as St. Genevieve and the wolf, Little Red Riding Hood, and her series of sculptures of women burned as witches.

While 1970s Jewish feminists reclaimed Lilith as a maligned figure of fierce independence, Smith’s Lilith does not merely rehabilitate her or tame the many fearsome associations she engenders. Hanging from the wall, upside down, she calls to mind a spider, or a hanging bat. (Indeed, Lilith as a succubus or vampire has deep mythological roots, most recently reignited in her appearance on HBO’s True Blood as a vampire progenitor and divinity.)

Out of a textual absence, Smith creates a potent physical presence. The most pronounced tension in the sculpture as I perceive it is in the way it is so human and so inhuman at once. Smith’s technique of body-casting ensures that this is a deeply inhabited, lifelike, and not idealized female form. The roughness of the bronze, with many unfinished, unrefined patches, heightens this sense of tactile materiality, and points back to Lilith’s earthy origin. Illuminated, the bronze exhibits a rich tonal range, a chiaroscuro effect: bright glare along the S curve of her spine, dark obscurity of her underbelly. And multiple shadows cast on the wall create their own visual effect.

Then there are the eyes. Their icy blue, alert vigilance makes it seem she is tracking you in her peripheral vision — it’s an unsettling, uncanny sensation. Or is she looking back at Adam? At intended prey? Is she menacing or beseeching? Victim or predator? The sculpture of Lilith, like the morphing stories that have evolved around her name, remains wild, suspended, resisting any attempt to pin her down.

Erin Hyman, PhD, contributes essays to various online and print publications on topics of cultural criticism, from the language of Oscar Wilde to the language of wine. She is also a San Francisco–based editor, specializing in contemporary architecture and design. Follow the Beyond Belief series here.