Riant Spaciousness: The Ci-Ça of Language and Image within Malak Helmy's Tinkering Pinks

Let’s balance on this pivot: the change from glyph into an alphabet of letters, the moment when one politics becomes another. Slow and fast, dense and happenstance, these alchemies are glacial and all at once. “Alexandria right now is all mood, no structure. There is no architecture to speak of, or city, only force,” Malak Helmy writes in 2011 about the Egyptian Revolution. She is an artist working in Cairo. We spoke as she completed a residency near Turin. I say illusion, mirroring, Malak says mirage. Malak says, “revolution lacks a document,” and writes of “a space without archives,” “a saline dehydration of language” (Solicited Document, Hordaland Kunstsenter, 2011).

I am noticing, at least, that language is not opposed to the image in your work, that the image is also under scrutiny (or suspicion). I see recurrences of illusion, mirage, and mirroring.

Yes. For a long time I was quite obsessed with how to work with that. I’m often building lexicons and exploring semiotics. I’m particularly interested in the life of signs . . . what they look like, what they’d say, or if they’re a geography, how they’re shaped, how you’d pass through them. I think about their personalities, breakups and moods, paranoias and psychologies. 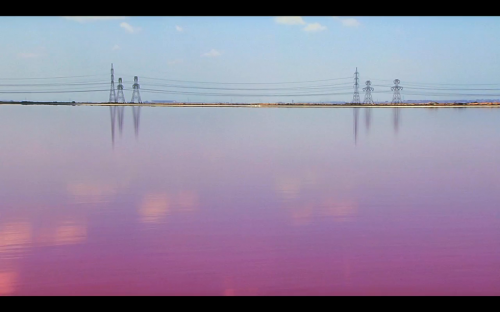 Still from Record from the Excited State, Chapter 3: Lost Referents of Some Attraction

Malak’s work has an edgelessness, even her writing. Her video works and texts don’t resolve as much as radiate. It’s the space of the infinite, and just as quickly, abyss, negation.

I grew up in the brand new city of Doha, Qatar, with what at the time seemed to me—and pretty much almost was—just three compounds, two schools, a shopping center, a crossroads, the corniche (sea), and one hotel and then desert, endless desert in between, and empty roads connecting. Also each of these things I described were walled compounds. And so it was in many ways a non-place; only later did I come to understand the particularities of it as I had experienced them. Going out of the compound was really like falling out of the house in Beetlejuice, this fear built of a never-ending yellow, and you had to jump back into the spaces saved for the realm of the living/dead.

I want to ask her, is an image the opposite of a desert?

Malak writes: The north coast of Egypt lies to the west coast of the city of Alexandria. It is an area where the circular flow of money and wealth is regenerated during the summer months and suspends itself in a complete standstill during the rest of the year. The project will begin with producing an archive of documents, records, images, verbal, visual, and tactile data that emerge from the site (visibleproject.org).

I think of the desert, the way it’s been written about by Nicole Brossard, by Baudrillard.

Poet Susan Holbrook describes Brossard’s novel Mauve Desert: “There is not simple progression from the negative to a positive inflection. Rather, its persistent ‘repetition with change’ compels the reader to perform the defamiliarizing act of looking both ways.” And, “This is a processional poetic, driven by association. Proposals, then, are thrown over in favour of a mobile unraveling of propositions.” 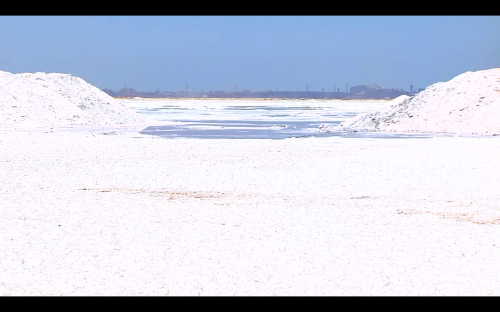 Still from Record from the Excited State, Chapter 3: Lost Referents of Some Attraction

You have stated that you do not want to talk much about what is going on in Egypt, which is changing daily and dramatically right now.

It is addressed, not directly politically, but sensorially . . . what the moments allowed, what kinds of madnesses fell, how one fell out, the sensation of time suspended, “characters waiting for the event to happen.” I would say I was interested in how one dealt with knowledge, with time, with order, with the collapse of institutions, how it affected the body, affected being together, affected being alone.

She writes: No documents are left as evidence of this moment of profound intelligence and self-organization. It is something that emerges and then ends. The evidence is the event itself–the value is in the self-preservation at the moment of experiencing this emergence (Solicited Document). 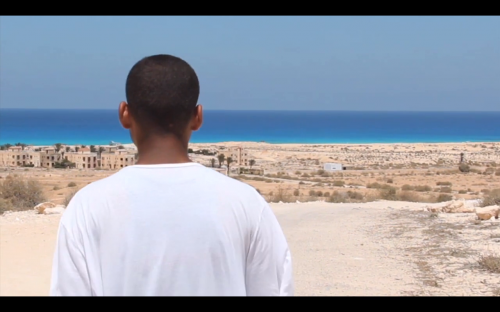 Still from Record of the Excited State, Chapter 3: Lost Referents of Some Attraction

A revolution is a cascade which gets written in reverse as a specific moment of change.

Change points back resonantly to hundreds or thousands of notes which made it necessary, and forward toward hundreds or thousands of directions it will affect. Crisp, tucked in, and assertive, the visual communicates with immediacy. It is an echo flashed, quickened by the authority of the enlightenment. The image is too fast for revolution; it is Muybridge’s caught horse, Descarte’s horse, already won.

Resonance gives way to multiplicity and change. In music, in writing, in time-based art, meaning appears to emerge during the course of that change. Malak’s cuts, like line breaks with their attendant non sequitur gaps, set the sequence vibrating.

I ask: Can there be an image which describes pure change?

She answers: One turns the image over and makes a score on its back each day: this is one yesterday, this is two yesterdays, this is three yesterdays (Solicited Document).

Excerpt from Record from the Excited State, Chapter 3: Lost Referents of Some Attraction

Part 2: The loss of the image to the market.

We are bubbling spectators in the glittering building having the encounter again and again, communicated at, receiving, sending, frenetically facing. The market is where we see one another.

I wrote to Malak in Turin, “It was a glittering Saturday and I was headed to the annual SF art fair [ArtPadSF] at the Phoenix Motel. There, each gallery exhibits in a motel room; outside, people chat and drink around a shimmering, blue swimming pool. It is the same weekend as all the MFA shows. Running around to all these events one begins to feel positively filled up with the frequency of encounter—encounter with visual surface, with other faces absorbed also in the quick frequency of encounter. It almost feels too fast to be communicative. I stopped on the way to snap a picture of a building made entirely of mirrored windows. When I slipped into the Krowswork Gallery space your work, Record from the Excited State, changed the pace. The first thing I noticed was beauty—purple reflected in water, a mirror reflecting a cloud. Next, I recognized a poetics in the video’s cuts, something which seemed like enjambment. I noticed the accoutrements of language, and of system-making—its designation as “Chapter 3,” its classification as a “Record,” the “Lost Referents” of the subtitle—but also that the slow, mysterious images resisted language, or had no use for it.

Jean-Jacques Lecercle talks about a “simultaneous deficiency and proliferation of signifieds underneath each sign.”

What if the revolution was the arch from the picture into letter? What if the history of writing is only a long divergence from the local born of globalization and its attendant abstractions? What happened to those old pictures and do pictures now still hover inside their matrix?

The concept carries the resonance and the force of word and image. “Revolution,” “Woman.” Conceptual art, tipping over into language / conceptual writing begging reception within the matrix of the image.

The market is where we see one another, but within the liberal State, an individual is only speech.

That individuals exceed their lives as capitalist subjects, but as democratic ones too. That politics define and defend what is undifferentiated and primary. Protection of life which precedes representation.

A change in the governance of the sign (and all the small attendant changes and bends in resonance). The line which can be traced from Ox to A.