While some have argued that cats have taken over the art world this summer, I’m happy to report that here in San Francisco SFMOMA has gone to the dogs with Mark di Suvero at Crissy Field!

It has been rewarding to see people enjoying the di Suvero sculptures with their canine companions during visits to Crissy Field. While checking out the Instagram photos people have shared from their visits to the exhibition, I fell in love with one group of particularly wind-blown, glamorous canines whose perfectly posed portraits were hard to overlook. With a little investigation I was able to identify trainer Aimee Porter, the don of what she calls her “Doodle Mafia,” an astute group of art-loving labradoodles (and a few non-labradoodles, “doodles by association”). I recently met up with Aimee and the Doodle Mafia for a walk through the exhibition, and was delighted to see how the dogs playfully interacted with the artwork. Afterwards, as we recovered from our fogbite (like frostbite, but from the bitingly cold San Francisco summer fog) in my car, I asked her a few questions about her experiences with the dogs and di Suvero. 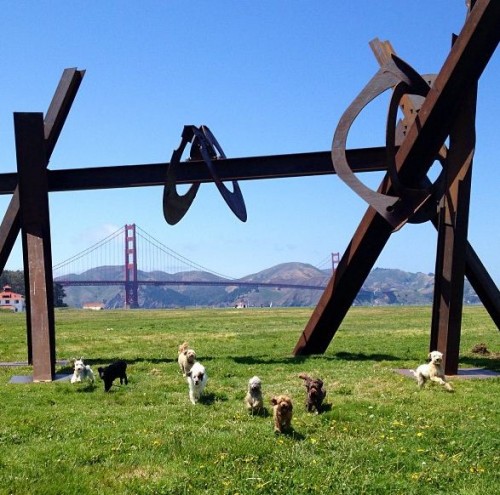 What is the backstory on the Doodle Mafia? How long have you been bringing the dogs to Crissy Field?

I’ve been working with the dogs for six years, and bringing them to Crissy Field for that entire time. As for the “Doodle Mafia,” I’ve always had a lot of doodles among the dogs that I train, and it was just something funny I came up with. Since they don’t look very tough, I thought I had to give them a tough name.

Did you and the Doodle Mafia watch the di Suvero sculptures being installed?

We did. It was really neat. At first the dogs were apprehensive because there was something new on the field. During the installation I used treats to help train the dogs, so instead of being fearful when they saw the sculptures, they’d think, “this is cool, when we’re around these things, food appears!”

Do you and the dogs have a favorite sculpture?

When I first learned that Old Buddy (For Rosco) is a sculpture di Suvero dedicated to his dog, it really touched me. This is what led me to want to take photos of my dogs with the artwork—as an homage to the feelings di Suvero had for his dog—I have them for all of mine, too.

What’s the most surprising, funny, or curious thing that’s happened with the sculptures and the Doodle Mafia?

For me, watching the dogs’ interactions with the sculptures change over time has been both surprising and exciting. Originally, just a few of the dogs were able to jump up and sit on the sculptures. As we continue to take walks here, it’s been fun to see each dog learn the routine, from just putting a paw up, to jumping up, landing, and sitting. For me, that’s fun because I can see their minds working as they learn and progress. It’s a nice feeling of accomplishment.

Finally, how have the di Suvero sculptures changed your experience of walking in the field?

They give me more to look at. The landscape of Crissy Field is already gorgeous, but looking at the art from different angles and with different light during the day moves me in different ways. One day I’ll really like how one of the sculptures looks as the sun hits it, and then another day I’ll notice that the fog rolling in behind them all looks incredibly beautiful. Even the colors of my dogs sitting on some of the works will strike me in a way that feels harmonious and meant to be.

For more photos of the Doodle Mafia, check out our extended album on SFMOMA’s Facebook page.