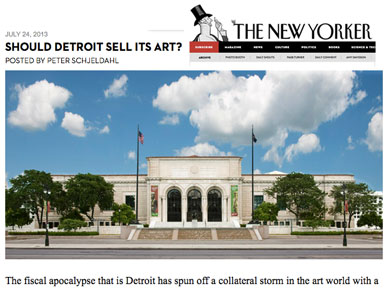 If you had asked the New Yorker a few days ago, they would have said yes. So why not sell SFMOMA’s Matisse paintings, the Mark Rothko, and the Magritte? Why not pack up the Clyfford Still room and the Warhols and the Ansel Adams photographs, then when it’s all finished, sell off the valuable land? Why not? Just think of the MILLIONS!!!

Well, it’s a good thing that SFMOMA is not city-owned like the Detroit Institute of Arts is. Otherwise the temptation to raid the city’s cultural treasures would be in the back of every politician’s mind when times got tough.

And that was exactly the attitude when the magazine published an opinion piece by Peter Schjeldahl suggesting Detroit should sell off the Detroit Institute of Arts’ collection to help pay off the city debt. He reasoned that if one had to choose between providing funds for pensioners or hoarding a massive art collection, selling the art was a no-brainer. He bought the line of reasoning of those who view works of art only as a type of commodity, not as cultural assets. His piece also implied that one could simply cash out on two billion dollars worth of art and have that cash available directly to the people in the city, which is absurd. Such a sale would involve a vast network of contracts, bequest obligations, donor agreements, and probably a whole new round of lawsuits.

So today, after much criticism and a blistering article by Hrag Vartanian of New York’s Hyperallergic art blog, Schjeldahl retracted and revised his opinion. But this fight is far from over.

It will continue with different individuals in different places and it will cover the same ground over and over.

It’s because even the well intentioned keep missing the point that a museum is more than a storage warehouse for rich people’s art. Museums conduct all kinds of programs, classes, and lectures and generate tax income for the city they are in. More importantly, museums, like libraries, are places where cultural literacy is not only taught but encouraged. In museums people see the good, the bad, and the ugly sides of culture.

Besides, the Detroit Institute of Arts is one of the few institutions still standing after half the population moved away. As a vital part of the city’s identity, its presence has been encouraging for the many artists who have moved there because of low housing costs and the opportunity to participate in rebuilding things. Oh, and let’s not forget some of the more high-profile artworks that have been made there recently—the skatepark collaboration with Matthew Barney and skateboard star Lance Mountain, and Barney’s film/installation/performance called KHU that utilized Henry Ford’s old foundries. And remember, Eminem came from Detroit.

But going back to the fight over priorities that will continue there, a federal judge today just allowed a lawsuit against Morgan Stanley over discriminatory practices that implicates predatory lenders in the financial ruin of the city. The judge said:

“Detroit’s recent bankruptcy filing only emphasizes the broader consequences of predatory lending and the foreclosures that inevitably result. . . . It is not difficult to conclude that Detroit’s current predicament, at least in part, is an outgrowth of the predatory lending at issue here.”