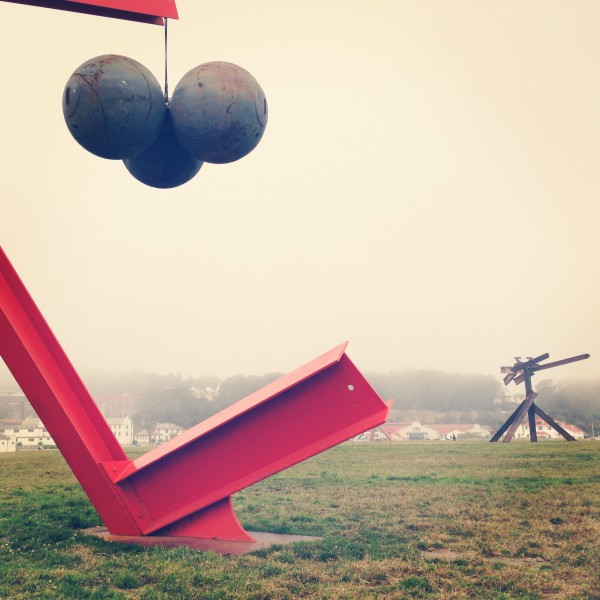 Approaching Crissy Field at San Francisco’s northern edge, currently the site of eight monumental sculptural works by Mark di Suvero, early on a chilly, fog-enshrouded Saturday morning, I felt the anticipation associated with encountering something big and awe-inspiring—how I might feel before seeing a blue whale at sea, the Grand Canyon, or the spherical mass of a planet through a high-resolution telescope. A pair of joggers passing by didn’t share my excitement, mumbling something about “these monstrosities . . .”

A quick Internet search confirms that SFMOMA’s first offsite installation during its expansion has been met with disgruntled consternation by some members of the San Francisco community. Many of the articles written on the installation are riddled with complaints, presumably from Marina locals, about obstructions to their unspoiled view of the bay and the works’ hazardous placement—apparently runners and their dogs are at risk of colliding with them. This has inspired me to defend di Suvero’s installation, albeit unnecessarily as, judging by the current 252 signatures on the petition to remove the sculptures and several rave reviews, di Suvero’s fan base appears to be considerably greater than this small group of dissenters. 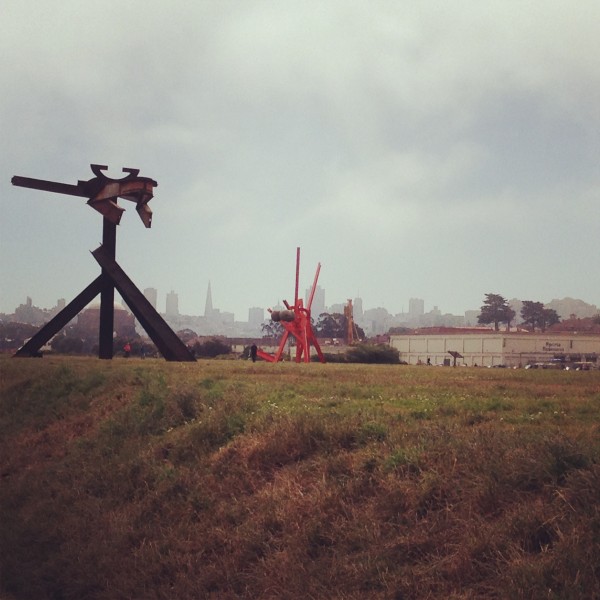 The steel sculptures—each weighing more than twenty tons—stand like friendly giants on the lawn facing the Golden Gate Bridge and are graced with a commanding presence and almost human poise, made all the more striking when set against San Francisco’s iconic structure and the mouth of the bay. Rather than competing with the surrounding views, they create new perspectives and visual relationships with the bridge, the nearby highway and cranes, the city’s vertical downtown skyline, and the rolling hills of the Marin Headlands. Visitors can be seen investigating the structures from all angles, bending down to take in the vertical reach of the I-beams, standing between the hefty steel legs, or watching elements such as the jaw-like crowning motif of the fifty-five-foot-high raw-metal Huru (1984–85) move almost imperceptibly in the breeze. The mists that creep up off the sea lend the pieces gravity, as do the long trumpet sounds of foghorns on cargo ships entering the bay. 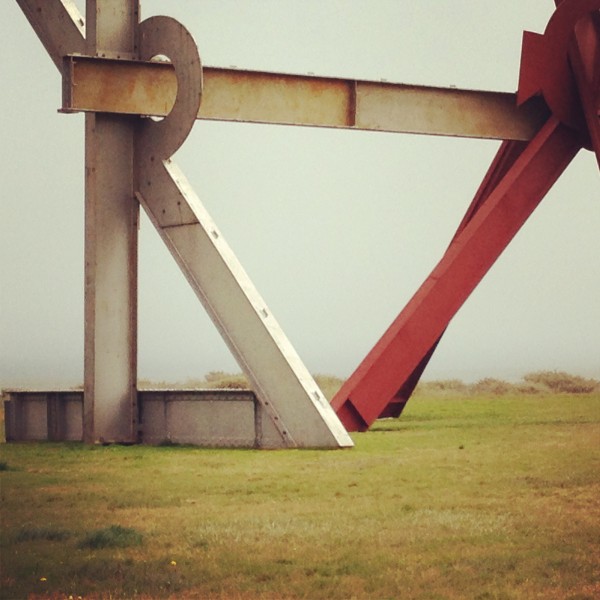 It’s exciting that art (some of which, in this case, was created decades ago) can still provoke outrage, while simultaneously invigorating and eliciting meaning. For one person the works foreclose viewpoints, but for another they ignite the surroundings, expand perspectives, and create new visual frameworks. In 1974 di Suvero’s forty-two-foot-tall Mother Peace (1969–70), one of the eight sculptures on view, was removed from outside the Alameda County Courthouse in Oakland after Superior Court Judge Lewis Lercara declared the work an abomination. The peace symbol cut into one of its beams (di Suvero was an opponent of the Vietnam War) was considered too political then. Mother Peace is now stationed in a field that was once an army landing strip, and although the sign is now cliché, the sculptures’ forms also embody di Suvero’s commitment to the ideal of peace. Constructed with crude industrial materials, the works nonetheless appear light, restrained, and balanced, and their largeness and optimism look unbounded when seen in Crissy Field, surrounded on all sides by great distances. Di Suvero himself passed under the bridge on his arrival in San Francisco from Shanghai at the age of seven, and today his works remind us of the aspirations that the Golden Gate came to embody—a passage to freedom, opportunity, and peace.