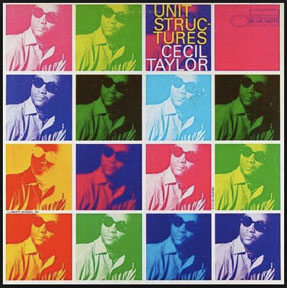 The cover of Cecil Taylor’s classic Unit Structures released by Blue Note in 1966. Other albums released that year include the Beach Boys’ Pet Sounds, Simon and Garfunkel’s Sounds of Silence, and Revolver by the Beatles.

Maybe you have never heard of Cecil Taylor, but clearly someone has—he was just awarded a half-million dollars for his art.

If you are curious, a good place to start is his Unit Structures from 1966, but play it on a stereo or through good speakers—this is really great music, and you will never really hear it if all you do is YouTube it. Trust me on this.

For those who listen deeply to music and approach jazz the way wine experts approach fine wine, Taylor is an American treasure, a supreme master of what he might call the jazz piano language.

At eighty-four, he is a living bridge connecting the tumultuous world of the 1960s jazz scene to our present day. He works in so many musical idioms it’s often difficult to pinpoint what he is doing or where he is going. The short answer, of course, is that he is leading.

So it’s in this capacity as a leader of the avant-garde free-jazz movement that his work has been studied and celebrated all over the world, even though he is relatively unknown outside of the jazz community in his own country.

Still, his work is hard to describe. One could say he uses beautiful classical flourishes right next to tight minimalist structures and that he brings to mind John Cage, Debussy, Charles Ives, Bela Bartok, and other piano legends like Thelonious Monk and Bud Powell. That hearing him play is like being with someone who can speak ten languages, someone who is in an effortless dialogue with practically everyone.

Yet, not only has Taylor been one of the country’s most complex and original musician/composers, he is also a poet. And he is a gay man. Unfortunately that fact was only made public when, in 1982, the hostile critic Stanley Crouch outed him. Years later in 1991, Taylor told Peter Watrous of the New York Times that “[s]omeone once asked me if I was gay. I said, ‘Do you think a three-letter word defines the complexity of my humanity?’ I avoid the trap of easy definition.”

Taylor is at home in a creative space that few musicians can get to; it’s a place where music is no longer about style or genre but just about language. Fortunately this prize means that somebody out there still values good work and understands that great art is not always popular art.

Description of Taylor by the Inamori Foundation: One of the most original pianists in the history of free jazz, Mr. Cecil Taylor has developed his innovative improvisation departing from conventional idioms through distinctive musical constructions and percussive renditions, thereby opening new possibilities in jazz. His unsurpassed virtuosity and strong will inject an intense, vital force into his music, which has exerted a profound influence on a broad range of musical genres.

From jazzcorner.com: Jazz pianist Cecil Taylor has won the Kyoto Prize awarded by the Inamori Foundation in Japan. Laureated in the category of arts and philosophy, Taylor will receive a diploma, a 20K gold Kyoto Prize medal and half a million dollars ($500,000). Well deserved prize for a jazz icon coming from a scene where it’s not infrequent to see world-class musicians vehemently rivaling for the privilege of playing pass-the-hat gig.