The Queer Cultural Center and the Contemporary Jewish Museum recently collaborated to produce a performance event, “Snapshot Poetics Now: Queer Encounters with Allen Ginsberg,” inspired by the CJM’s current exhibition Beat Memories: The Photographs of Allen Ginsberg. Qcc and CJM invited six San Francisco Bay Area artists and scholars (including me) to engage with Ginsberg’s candid photographs. We used the photographs as portals into Ginsberg’s milieu.

I was drawn to this image. 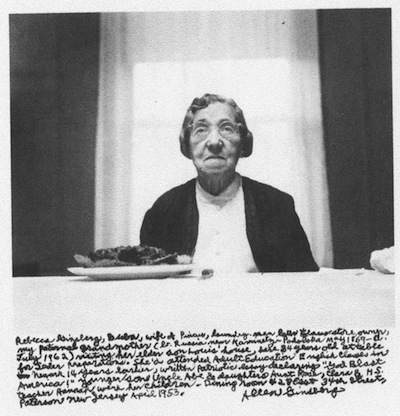 Ginsberg didn’t focus his camera, or his attention, on very many women. This is one of only two women pictured in the exhibition. Most are snapshots of Ginsberg’s lovers, literary mentors, and protagonists in the mythology of the Beat Generation.

Ginsberg situates Rebecca Ginsberg primarily in relation to her husband and children. Who was she, and what did she do outside the family? Ginsberg gives us only one hint: he mentions a “patriotic essay” she wrote for her adult education English class, at age seventy, fourteen years before this photograph was taken.

I tried to imagine how that essay sounded and why it had survived in Ginsberg’s memory as a key to his grandmother’s identity. At CJM, standing in front of a mural-sized enlargement of Rebecca Ginsberg’s photo at the entrance to the gallery, I performed my rendition:

to speak their minds,

and on tar roofs

to memory, or at least the page.

not to run the store,

Or when they do,

the freedom to shoot

a wife in the head

and not serve time.

for their outrage at custom

that does not extend

and give me only a taste

at the Seder table

of my eldest son.

No freedom for me

for me surrounded here

by kin who call me

Buba, who call me Mrs.

Ginsberg, who call me

if they need something.

Who knew what I

Who knew what I

would write, what name

No freedom for me at the Seder table

my grandson, the writer,

straight in the eye,

Who knew what it meant 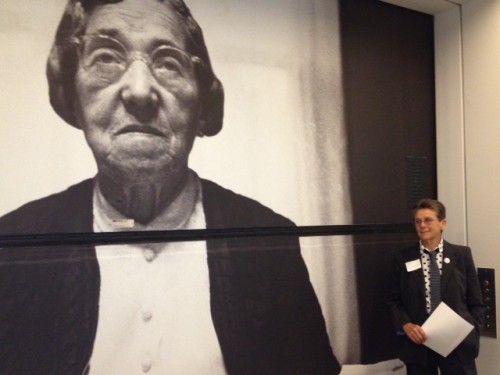 Acting as stops on a gallery tour, each performer brought a unique perspective to the exhibition Beat Memories while creating new narratives about queer culture, queer history, queer poetics, and queer visuality. 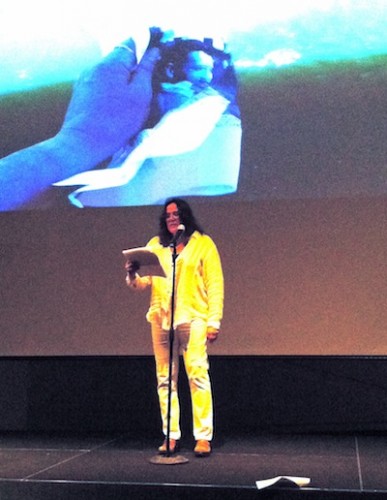 Kim Anno riffed on the caption of a photo picturing Jack Kerouac on the Staten Island Ferry Wharf. Kim performed against the backdrop of a video created for the occasion by Joyce Burstein. 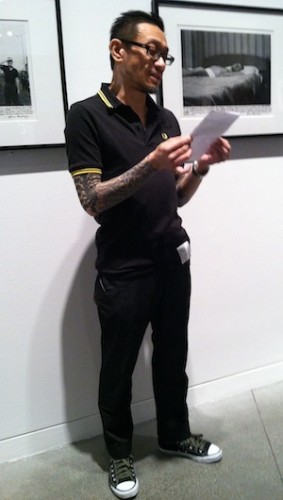 Justin Chin performed in front of a photo captioned “Bill Burroughs in back bedroom waiting for company.” 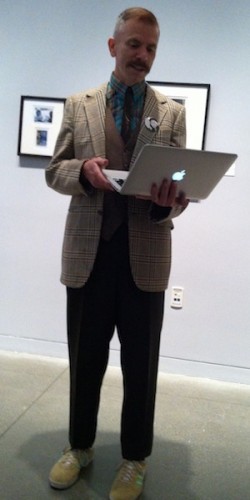 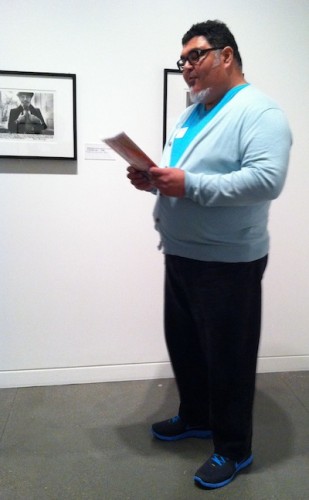 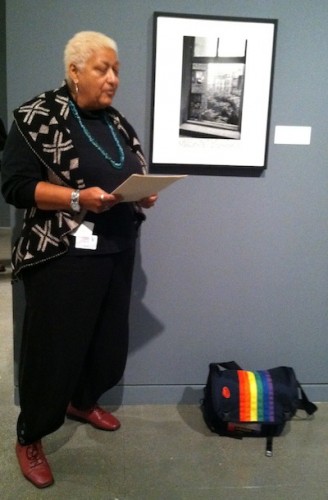 Jewelle Gomez closed with a series of open windows.

The Snapshot Poetics event is part of an ongoing series, Queer Conversations on Culture and the Arts (QCCA), which brings together culture-makers to discuss a broad range of LGBTQI topics in the humanities and the arts. California College of the Arts collaborates with Qcc to produce these events year-round. The event, moreover,  is one of dozens of queer-affirmative events rolling out this month under the banner of the National Queer Arts Festival. The Queer Cultural Center has produced the festival since 1998. To date, NQAF has sponsored over four hundred events created by one thousand queer artists. It was an honor to participate.