Garry Winogrand is on view on the museum’s fourth floor through June 2. Thanks to Georgie Devereux, who interviewed Anastasia Mann and Susan Wall at SFMOMA on April 27, 2013, and to Judy Bloch, managing editor of publications, for this post. 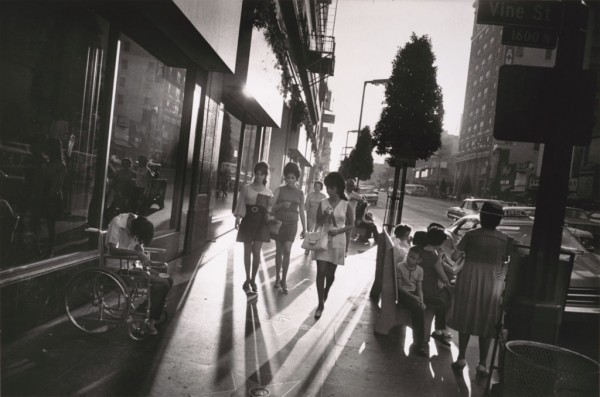 They’ve been called the Three Graces, walking east on Hollywood Boulevard in a shaft of unearthly light in one of Garry Winogrand’s best-known pictures. To the left (their right) is a young beggar in a wheelchair who briefly catches their eye; to the right, a bus stop bench from which a bespectacled boy also peers over at the beggar, who isn’t looking at anyone.

There’s a lot more in this picture—the stars embedded in the sidewalk (the Graces are about to step on gossip columnist Louella Parsons), the broad-backed lady in a hat staring west into the classically diminishing horizon, and, of course, the street sign, “Vine St,” that lets us know we’re at the world’s most famous intersection. But like the beggar and the boy, all of that is in shadow. The light, and the picture’s momentum, comes from the women, inexorably moving forward, made tall by their long legs in short skirts and their hair piled high and by their own shadows.

When Anastasia Mann opened the Los Angeles Times arts section one recent morning and found Winogrand’s Los Angeles, 1969 in a half-page spread, she didn’t see graces or beggars or perspective, she saw herself, forty-four years ago. “Bam! There I was, right on page two. . . . I almost dropped my coffee—and immediately called Susie in New York.” Mann (on the left in the 1969 picture) and Susan Wall (on the right) spoke to Open Space recently while standing in the SFMOMA galleries in front of the photograph that Winogrand aficionados know well but that these two women, seeing it for the first time, view differently. “I actually remember the occasion,” Anastasia said. “I remember [our] dresses; I remember Susan’s purse. Better than she does.” 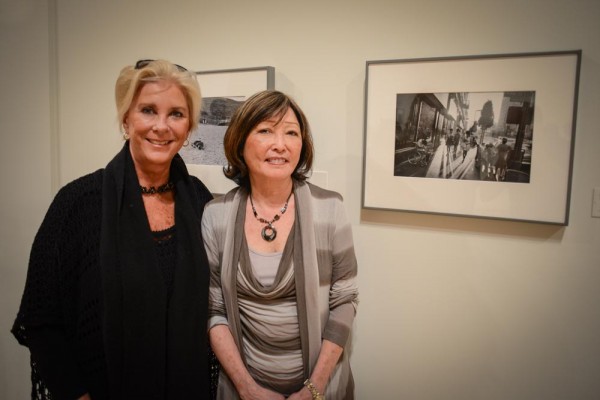 The occasion? “It’s a typical shopping day. We had probably hit Leed’s shoe store, which was one of our favorites, and we could have been heading across the street. There was a soda fountain/coffee shop with chocolate malts and cheeseburgers. . . It’s just what we did,” Anastasia said.

For Susan, the memory is much as Winogrand frames the scene: “Just the three of us. The other people at the bus stop and the guy in the wheelchair—no.” Inseparable then—“we had the same jobs, we went to college together”— in conversation Anastasia and Susan still convey all of the energy for the present moment—and for each other—that seems to have propelled them and a third friend, now out of touch, down Hollywood Boulevard and into Winogrand’s picture that long-ago afternoon. There’s youth, and a certain grace, in that.

As for the guy with the camera? “I just remember seeing this man . . . squatting down. . . . He took quite a few pictures,” Anastasia recalled. “It had very little impact [on me] at the time. It was just kind of—crazy; another crazy person on Hollywood Boulevard.” (Just as Winogrand would have wanted to be seen, one imagines.)

After all, Susan said, “it is Hollywood Boulevard, but we’re not celebrities.”

Anastasia: “Of course we are.”

Judy Bloch is managing editor, publications, at SFMOMA. Previously she was publications director at the Berkeley Art Museum and Pacific Film Archive.