In 1954 Garry Winogrand, then a twenty-six-year-old commercial photographer, was commissioned by Sports Illustrated to do a story about a young boxer named Nick Biondi. The two struck up a friendship and stayed in touch until Winogrand moved away from New York in 1971.
When SFMOMA and the National Gallery announced plans to organize a retrospective of Winogrand’s work—now on view at SFMOMA, until June 2—Biondi contacted the curators and offered to speak about what it was like to be one of Winogrand’s subjects. He and SFMOMA Assistant Curator of Photography Erin O’Toole spoke over the phone on April 10. The following interview has been edited for length and clarity. 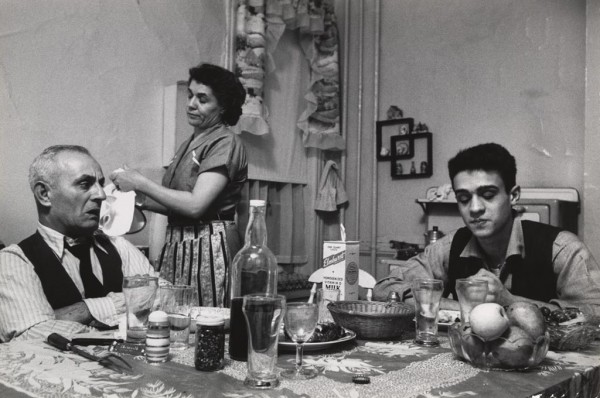 Erin O’Toole: Why don’t we start with you telling me your full name, where you’re from, and any other pertinent background details you’d like to give, just to give a little introduction.

Nick Biondi: My full name is Nicholas Biondi. Nick Biondi. I was born in Manhattan, New York. Lived there for most of my life, and when I was seventeen I went and applied to the Golden Gloves. I was making headlines during that time because I was having first-round knockouts. Garry Winogrand was assigned to do a photographic study for Sports Illustrated and got in touch with me. . . . He really came around when I had a twelve-second first-round knockout. I still hold the record for that year. Garry came to the third fight, and I won that fight; he took pictures. And he went to school with me, to my high school, to take pictures. And he followed me home one night, and that’s the picture you see at dinner. I have a number of those pictures, and if you look at the picture at dinner, you can see my father scolding me.

O’Toole: Were you a bit of a troublemaker?

Biondi: No, it was just a father-son thing, nothing that I can recall. But look at Garry! Where was Garry? You would get the idea that we were so used to having dinner guests that he just blended right in. Not so! When Garry was taking pictures, if we didn’t see a flash, we were suspicious—what did we know about cameras? Look at my father and mother, how natural they look. Garry was only the second guest we had in twenty years! [laughs]

O’Toole: Do you feel that had a lot to do with him as a person, that he made you feel comfortable?

Biondi: One of the things that still amazes me about the encounter was that neither I nor any of the other participants in the photographs were even remotely self-conscious. Normally when there’s a guy with a camera focusing his attention on you, a person might become self-conscious. Self-consciousness didn’t exist for me then, and looking at the photographs it doesn’t show itself in the pictures. I wasn’t aware of Garry the Photographer’s presence. He was like a ghost, and we simply went about our daily tasks. It helped enormously that he didn’t use flash, but it also made us wonder if he actually had film in the camera! In my opinion this ghostliness was a major component of his talent. 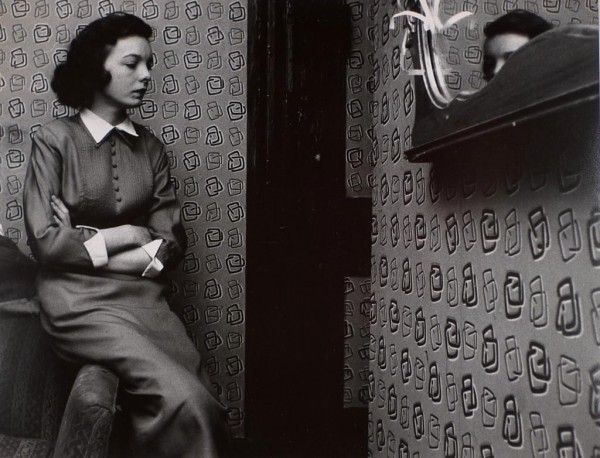 O’Toole: Something else I wanted to ask you was about the pictures from [your] clubhouse.

Biondi: Garry became fascinated that a seventeen-year-old kid had a social club in Manhattan, consisting of fourteen teenagers—a place they could go to socialize with their dates to get off the street corners, where the police would not arrest them. Where they would pay their dues and the rent each month and continue the social structure for five years. Garry came from the co-ops of the Bronx, and our club house was a co-op in Manhattan.

O’Toole: There was going to be a victory party there after the fight, but then you didn’t win the fight, is that correct?

O’Toole: So what happened?

Biondi: Well, I got knocked out in the third round. You gotta understand I’d had three first-round knockouts—I’d never made it back to the corner. So in the fourth fight, when I should have known something about pacing yourself, I didn’t. I was exhausted. The fight was in Brooklyn, and afterward we took the subway back to Manhattan. Garry took pictures on the way, and he came to the party at the club.

O’Toole: You said that Sports Illustrated had commissioned the story.

Biondi: That was my understanding. And then they didn’t use it.

O’Toole: Because you didn’t win?

Biondi: That’s my guess. Then they sold it to Pageant magazine, and Pageant printed it, in May of ’55.

O’Toole: So it became a different kind of story.

Biondi: Same writer, same photographer, but it became a human interest story, an amateur boxer. Sports Illustrated probably wanted someone who won the championship, but that was not to be. The experience was fantastic, though. 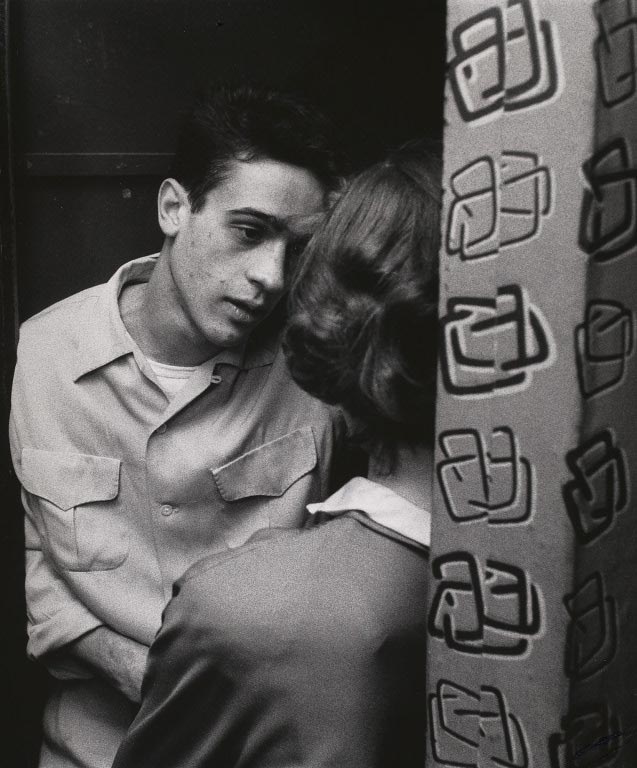 O’Toole: The gym was in your neighborhood?

Biondi: The gym was in the neighborhood; that’s how we did it then. The gym that I trained at was on Fifty-Fourth Street between First and Second Avenue in Manhattan and is still standing. I can tell you right off the bat, knowing a little bit about Garry, if I was having this kind of success in the Bronx or Queens or Brooklyn, he wouldn’t have taken the assignment. He was strictly a Manhattan guy.

O’Toole: Yep, even though he was from the Bronx.

Biondi: Even though he was from the Bronx, he was strictly Manhattan.

O’Toole: And why do you think that’s the case?

Biondi: Why was he strictly Manhattan? He just was a Manhattan guy. You know, he became one. But John Szarkowski  [director of the Department of Photography at New York’s Museum of Modern Art from 1962 to 1991 and a great champion of Winogrand’s work] called him a “city hick,” and I agree with that characterization 100 percent. Winogrand was fascinated with Manhattan.

O’Toole: How long did you continue to box?

Biondi: I started in November or December 1953, and the tournament for me lasted through January 30 of 1954. This is the period of time that Garry and I were together. There’s a picture in Pageant magazine on the front page where we’re running, me and a partner running in the park. Garry asked me, “Where do you run?” Run? Who ran? [laughs] My training didn’t encompass running. I would have been in better shape if it did! [laughs] So we said Central Park and decided to meet in Central Park. If you look at the picture in Pageant, we look surprised when we came upon him with his camera—he didn’t stage anything.

O’Toole: He just followed you around.

Biondi: Yeah. He said, “Run,” so I said, “I guess we’ll run around the reservoir once.” And he took the picture and he caught us, just caught a perfect picture. Then he went to high school with me. None of the kids in the drafting class that he took pictures of were self-conscious—it was amazing! 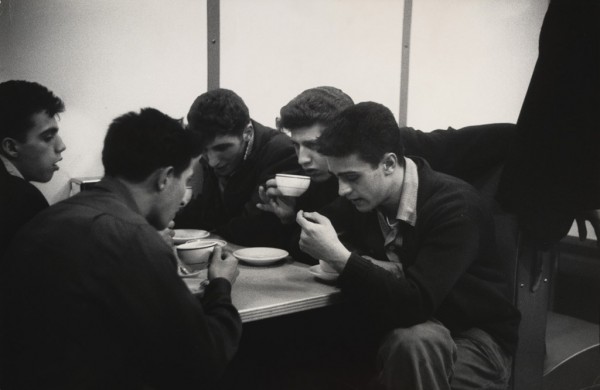 O’Toole: Was he just there with you the one day at school, or was he there for several days?

Biondi: One day at school, one day running, a couple of days at the club—all separate occasions. At the house one evening, and another time at the gym where I trained. He took lots of pictures at the gym. And then we became friends. Sometimes Coronet magazine or Collier’s would need some young teenager types, so I would get them for him and he would stage us for an assignment. Then I met Adrienne, his wife, and we went to the beach once with his kids. He did the boxing pictures that January, but I kept seeing him after that.

O’Toole: Tell me a little bit about his personality, or your impression of him as a person.

O’Toole: What does that mean?

O’Toole: Is this your motto?

O’Toole: And you feel he fit that bill?

Biondi: Class A person. Nothing slimy or sleazy, nothing like that at all. Up-front and intelligent, creative. And I think when he was photographing it was like a gambler who’s into gambling, they just lose themselves. . . . There was a movie called The Leopard, by [Luchino] Visconti [based on the novel by Giuseppe Tomasi di Lampedusa], and it says what we do in life from the minute we’re born is try to escape back into the womb. We do that by being involved in some occupation or pursuit and that’s when you’re the happiest—in pursuit of your dream. 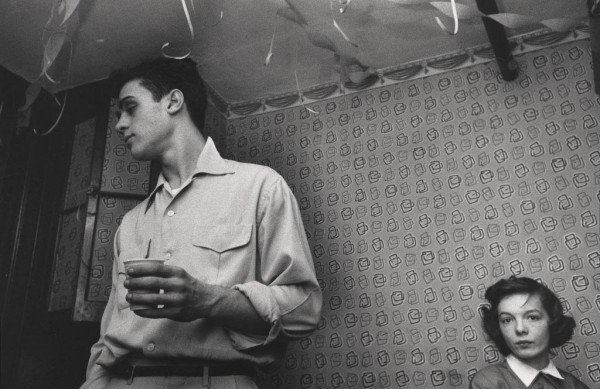 O’Toole: Did you feel that way boxing?

Biondi: Boxing was a great thing, yes, but I don’t know why I did it. In fact, when I think back on it, if I’d won my fourth fight, there would have been tremendous pressure on me to continue. And believe me, boxing’s a lousy way to make a living. I mean, the training! [laughs] Just think, you get punched in the head every day. Forget the actual fights!

O’Toole: Not so good for your future prospects.

Biondi: [laughs] No, but you know, boxers were my idols as a kid.

O’Toole: Boxing was really big in those years, too, much bigger than it is now. Winogrand shot a lot of boxing and football, and he made some great photographs of Muhammad Ali later on.

Biondi: Right, I’m aware of that. I followed his career, of course, from a distance. I lost touch when he went to California and Texas. But when he was still in the city, I’d run into him. I’d tell him about my latest love affair and that kind of thing, and we’d commiserate. . . . I ran into him with a girl once, in front of his West Side apartment, and we went up to the apartment. He pulled out a lot of photographs to show me from years back and gave me a bunch of them. I think that was when I asked him, “Garry, what is the most creative thing you’ve ever done in your life?” And without missing a beat, he replied, “Having children.” I never forgot that because it offered the possibility for me to be just as creative as Garry! [laughs] 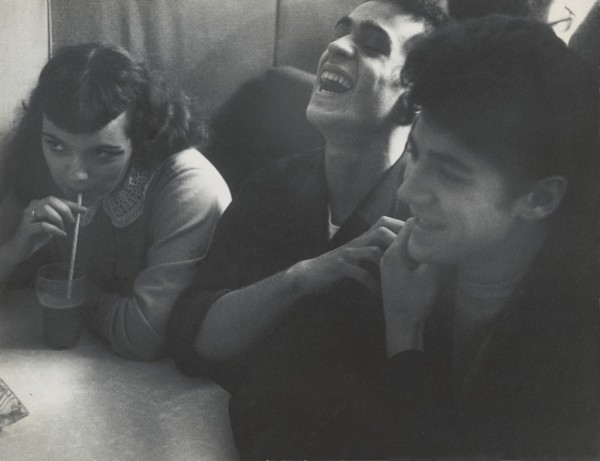 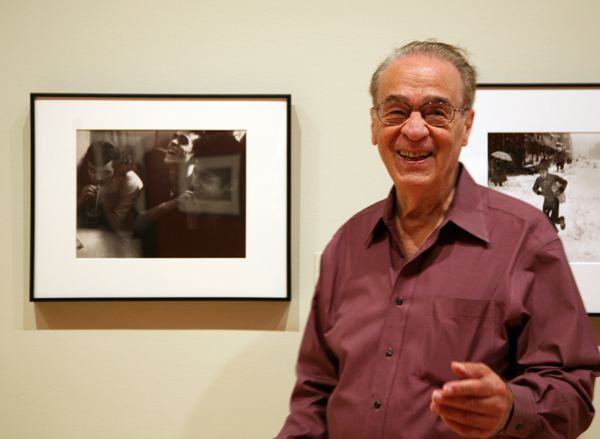 Erin O’Toole is assistant curator of photography at SFMOMA.