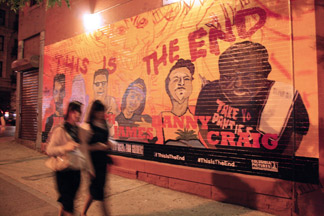 Two words: Professional Jealousy. Busy people get things done because, well, they are busy. But don’t bother telling that to the hipsters who keep spray-painting sarcastic graffiti on the mural Franco just made last weekend in Williamsburg, Brooklyn—they won’t care.

To them he’s just another good-looking guy with all the money and all the luck. What they don’t realize is that people tend to see only the end results of hard work, not all the headaches and bullshit it takes for projects to actually get done.

At age thirty-five, not only is he well-credentialed, but he is a multimillionaire with a net worth of about $22 million. He has appeared in seventy-two films and in numerous television shows. Sure, growing up in LA didn’t hurt. Neither did having smart & creative parents who both went to Stanford. Most importantly, it seems like he is someone who has the ability, a superpower really, to not only recognize but to act on an opportunity when he sees one. Anyone can recognize an opportunity, but to act in the right way at the right time, that is much rarer than one might think. 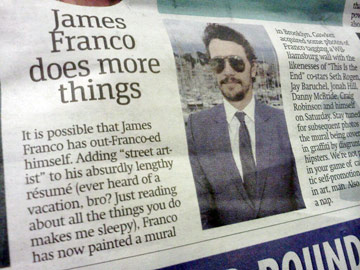 Article seen in the New York Metro paper, given out to subway riders.

But from what it looks like, if it’s possible for him to do something, he does it. He’s been a student, a director, and an actor, worked at McDonald’s, dropped out, gotten in, traveled the world and is constantly busy.

He’s even contributed to art projects such as THE THING Quarterly and Carter’s Erased James Franco and Maladies.

IMDB also says about him that he “may perhaps be one of the most academically accomplished actors (an ‘extreme scholar’) in Hollywood history: besides his BFA in English from UCLA, he has two MFA degrees—both in writing—from Columbia and Brooklyn College, and a third MFA, in film, from New York University. He is continuing further degree studies while also teaching a graduate class that takes students through the process of making a feature-length film.”

But back to the mural—I am no expert on James Franco, but I know that defacing other people’s art is pathetic. Although the 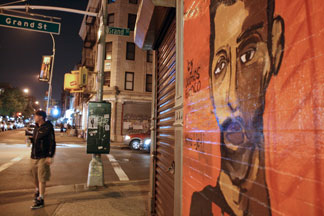 mural itself is essentially an ad for his new film This Is the End, it is as crudely painted as any you’d find in an elementary school. But hey—given the choice of a brick wall or a mural, I’d always choose a mural. And if you don’t like it, paint one of your own!

Instead of hating on James Franco so hard, maybe ask yourself what you are doing with your time.