Language to Be Loved At 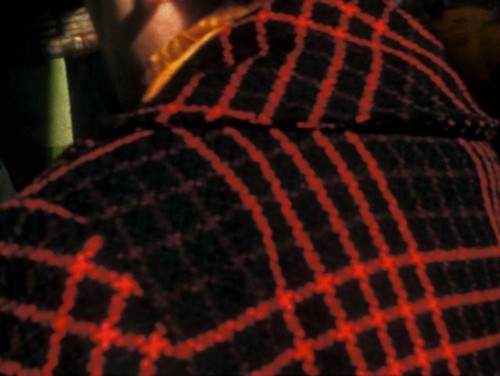 still from August and After

Nathaniel Dorsky’s films are the opposite of language, and don’t need it. He talks about poetry, but only because he is talking about what’s ineffable, about what is beheld by the eyes, but also held inside of the body. His camera stares, and when, in the dark of the theater, the slow, silent images are illuminated by light, looking is doubled. What happens to duration in the act of staring, happens here. “Simultaneously, what is beautiful prompts the mind to move chronologically back in search of precedents and parallels, to move forward into new acts of creation, to move conceptually over, to bring things into relation,” says Elaine Scarry.

Benjamin Fondane’s ciné-poèmes create this space inside one’s head. These films are made to be read. Here are the first eight parts of the 180-part ciné-poème Paupières mûres, from 1928.

3  the globe of a streetlamp with two candles, its two flames like human eyes

5  a large patch of sidewalk on which

The movement happens in the disjunction between what is supposed to be there, pictures, and what is really there, words. The experience becomes uncanny, we are tickled by our own participation, which somehow overthrows the authority of the auteur. Even as the pieces deal with representation, they are radically open. That is because the images project onto imaginative space, and the light that shines behind them is the infinitude of language. 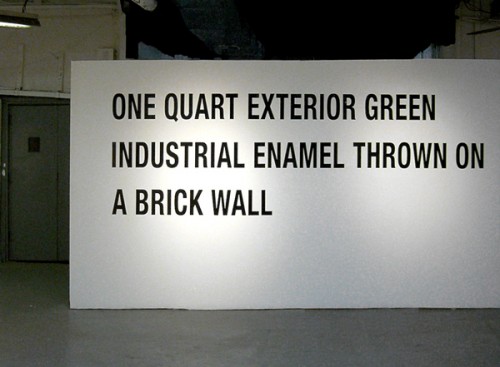 Lawrence Weiner’s work is complicated, glamorized by its rendering in language. “Art is the relationship of human beings to objects and objects to human beings,” while literature is “what human beings feel about other human beings,” the artist said in 1982. Words here do not mean something large and wonderful, or mean anything outside the objects they stand in for. Slate indicates nothing more than a slab of stone, water signifies the element itself.

Weiner’s language describes one-to-one correspondences with things in the world. Language here is a denotation system for the aforementioned relationships. It is interchangeable and usable. Language is physical, marking. “Language was the best carrier, it could go all around the world,” the artist said in a talk during his 2007 Whitney retrospective. “Slate in the U.S. is the same as slate in Norway. This way of using language is democratic.”

Statements was his pivotal bookwork, the first piece to be composed entirely of language. He describes each statement as a receipt of bill (like the gas bill) occurring after the action. If this insistence on the correspondence between a thing and its name seems familiar, charming or naive, this might be because Piaget identifies this view of the world as a primary stage of childhood language development: “The name of the apple is written down inside the apple.”

Despite this use of language, the feeling of communication is in the room. It’s just one paradox among many. Language is used like a currency, a thing of definite and exchangeable value in the service of de-commodifying the art object. The authority of the logos is borrowed to insist on the primacy of physicality, the inscrutability of the object. Words are pure abstraction, yet their material presence hangs there like a fact. The artist intends to use words as mere placeholders, but the artworks produced are radically indeterminate. As with Benjamin Fondane, words have an absolute reference, yet one prismed through the infinitude of language. 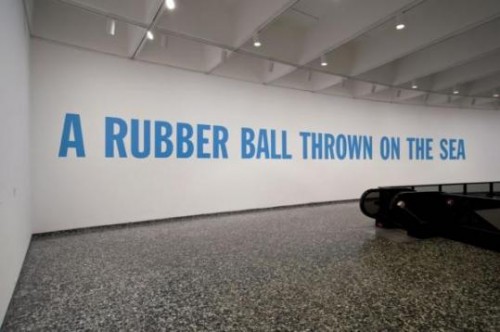 As short narratives flash onto the screen in black letters, then off just as quickly, Young-Hae Chang Heavy Industries simultaneously produces the pleasure of looking and the pleasure of reading. The two could be said to be distinct pleasures. Looking happens all at once. It bears the trace of the original look, the trace of love. Its duration is radically different from the duration of reading, which, in Western alphabets, unfolds in a line through time. Here, language ludically breaks into hallowed gallery space. The letters are geometric and black, usually against a modernist white background. Direct, chatty narrative breaks through those graphic choices. That which is always present in the gallery but not often talked about, the personality of the artwork, is inflated here. Other artworks suddenly seem coy in comparison.

In a recent lecture, Johanna Drucker defended “aesthetics,” or as she put it, “aesthesis as a producer of experience,” without which, we cannot think (as we need experience to do so), à la John Dewey. She posited that all objects and events are “transactional,” a peculiar choice of word defined tertiarily as “a communicative action or activity involving two parties or things that reciprocally affect or influence each other.” Her aim was to uncouple art from politics, or at least defend a space in which they could be so. Her reason for this was to avoid closure, since “a positive agenda for an artwork affects closure upon the viewer.”

Even if looking does not exactly stand in for communicating, the viewer and the artwork are in the room as physical presences, affecting one another. The moment is always a social one. Against the backdrop of the way the other artists here use language, Young-Hae Chang Heavy Industries seem to be making a closing down gesture, one that collapses the infinitude of language. Yet, they redirect that same potential outward from the screen in a seemingly social act. The work feels subversive for the way it’s directly, and subjectively, communicating. That which cannot be resolved into closure, for Young Hae-Chang Heavy Industries, is its social face.

Johanna Drucker closed the Graduate Lecture Series at SFAI and has a solo show opening at the Center for the Book on May 24.