Amanda N. Simons on Marriage (In)Equality and the Media

Amanda N. Simons wrote this commentary in response to an assignment in my Visual & Critical Studies dual-degree seminar at California College of the Arts. I invited Amanda to share her perspective with the readers of Open Space.

Three days earlier, FoxNews.com published the article “To be happy, we must admit that women and men aren’t ‘equal,’” by Suzanne Venker. A demonstrative image accompanied the article, reinforcing its message. In a simple depiction of love, community approval, and law enacted through ritual, a groom leans in to kiss a bride. Black suit, white shirt, silver tie, a strapless white gown, soft veil, and diamond-like jewels. Behind the couple, a bank of windows reveals a panorama of New York City. Alone and yet before an audience, this is the moment. 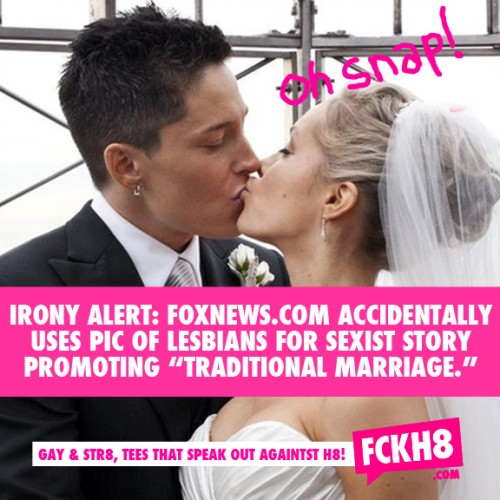 Visual shorthand communicates all that traditional marriage entails. The image enables its audience of internet readers to skim the page and quickly comprehend Venker’s message: abandon feminism and re-envision traditional, gendered relationships. And yet, this image depicts not the assumed opposite-sex bride/groom dyad but actually the 2012 Valentine’s Day marriage ceremony of a lesbian couple, Stephanie Figarelle and Lela McArthur.

Laughter collectively broke out among Twitter followers and web sources such as FCKH8.com, Buzzfeed, and The Advocate. The ripple effect of online shares and reshares is actually more complex than a liberal media reaction to an embarrassed FoxNews.com. The very act of removing this image stealthily demonstrates the paradoxical inequality of same-sex marriage in a post-DOMA United States. While many states do exercise the agency granted to them by the Tenth Amendment by allowing same-sex couples to obtain marriage licenses, conflicting federal law does not currently acknowledge the legitimacy of these licenses, per the 1996 Defense of Marriage Act. Similarly, the New York City marriage of Figarelle and McArthur bears no legal authority in their home state of Alaska. Yet this couple performs the visual tropes of traditional marriage ceremony even though the subsequent image is not valued as such. But we all know that, and this image is a prompt for deeper contemplation and self-reflection. At whom are we really laughing, fellow advocates?

Are we to laugh at FoxNews.com for a jump-the-gun visual oversight by some probably intern? Do we laugh at Suzanne Venker for her proposition to abolish feminist notions of gender? Or do we laugh at ourselves for promoting a dichotomous gender system that is both enthusiastically promoted by Suzanne Venker and convincingly performed by Stephanie Figarelle and Lela McArthur? This is the very system marriage equality activists are fighting. By using the charged and historically exclusionary visual lexicon of the marriage ritual to both access and communicate the emotional attachments socially understood through that performance, we are actually enacting a script not our own. And, reperforming that script, these site-specific marriages are accepted as well-dressed knock-offs, a good-enough-for-now shoulder shrug in celebration of national inequality. This is not social justice. And for that reason, I applaud FoxNews.com for removing the image.

A native of Mid-Michigan, Amanda N. Simons holds dual BA & BFA degrees in English (writing), and Studio Art (painting) from the University of Michigan, Flint. Currently a candidate for dual MA & MFA degrees in Visual & Critical Studies and Studio Practice at CCA, Amanda is the first to admit that the number “4” appears frequently in her life. As an object-maker, writer, social activist, and former corporate cubicle dweller, Amanda’s work explores topics of queer identity, gender expectation, human rights, and the translation of written law into phenomenological space. Her visual work has been widely exhibited in the Midwest, at such venues as Alden B. Dow Midland Center for the Arts, Woman Made Gallery, Cara and Cabezas Contemporary, and also at Buckham Gallery—where she served in varied capacities (artist member, media designer, board member, and also treasurer) over the course of four years. In one of her most recent projects, Amanda is part of a collective of female artists from across the country participating in a traveling exhibition entitled Underneath It All: Desire, Power, Memory, and Lingerie. Over the next two years the exhibition will tour in Minnesota, Arizona, Massachusetts, and New York.