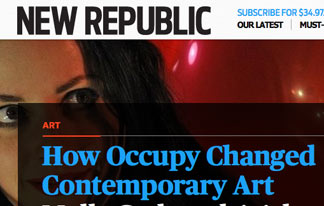 Screenshot from the New Republic

I almost spilled coffee on myself yesterday when I read this bombastic headline in the New Republic: “How Occupy Changed Contemporary Art.” Then I laughed out loud.

It’s just that I die inside a little bit more each time when I read yet another “art review” written by someone purporting to be an authority on the subject. While I understand the impulse to write sensational headlines to promote someone, it’s just too much to take when that gets mixed together with the Occupy Wall Street rhetoric.

Somehow the article, which was supposed to be a review about New York illustrator Molly Crabapple, morphed into an attempt to elevate her as an example of a new “vanguard” of Occupy artists who favor vague things like democracy, fairness, and sharing. The reviewer goes on to claim that her using Etsy and Kickstarter is proof she is the real deal.

Sure, I can understand the author’s enthusiasm for Crabapple, an attractive former nude model and illustrator, but it’s hardly necessary to oversell her by claiming she is an avant-garde artist. By doing so the author inadvertently seeks false validation, implying it’s not OK for a woman to work as a nude model and that an attractive woman can’t get respect unless such lavish claims are made on her behalf. 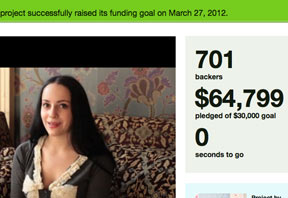 Besides, according to Fastcompany, she hardly needs such blustery advocacy, noting that “at 29, Crabapple is making six figures a year — and she has for the past three years.”

Not to mention the fact she already raised almost $65,000 through Kickstarter for the show being reviewed, and it all went to her, because it’s her project — not to “the cause,” whatever that is. Yet the conflation of her and Occupy implies that by supporting Crabapple, you are supporting Occupy.

But sadly, it looks like yet another blatant marketing scheme capitalizing on the brand built by anticapitalists. How’s that for irony?

Of course she perpetuates all this artspeak nonsense on her Kickstarter page: “Your support in this project will help me cover the cost of creating spectacular art that’s meant for everyone to enjoy. And help me do it without asking the permission of rich people. Because art is awesome. And big, splashy, gold-encrusted, glittering things are awesome. But so is populism. I want to see how they look together. ….While I’m making Shell Game, I want you with me.”

Shell Game? Is this a con? Forgive me if I am not impressed. Since when did rich people need to give anyone permission to make art? She’s raised $65,000, AND she’s selling these paintings for thousands of dollars each. No joke. This is a SHELL GAME!

And then there’s this praise-filled article (complete with photo spread) from a style blog about her that deserves to be quoted at length:
“… Molly lives a post-impressionist fantasy as a successful artist herself in a loft in NYC, that is replete with chandeliers, paper lanterns, burlesque postures, plumes, and art everywhere. When Molly is home painting and sketching her ‘hyper-detailed surrealist Victorian pictures,’ she is in an embroidered silk robe, gold and pearl Rococo slippers, and might be obsessing over a pair of Alexander McQueen Gilly booties etched with almost medieval knot-work. But when out and about, like a 19th-century painting, Molly is in hourglass silhouettes, crinolines, crocheted gloves, veiled head pieces and other arcane accessories.” 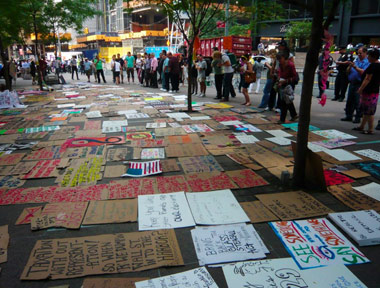 Before Zuccotti Park was raided and Occupy Wall Street was pushed out of Lower Manhattan, hundreds of posters and signs were made by anonymous artists, few of whom ever got any kind of compensation for their time or artwork.

While I would never begrudge another artist making a living or having success, the New Republic article never thought to question the obvious contradictory elements of this whole marketing strategy. While she is getting her moment in the sun (see the Rolling Stone article + flattering photo here), the truth is that she lives in Lower Manhattan and her career was well under way long before the Occupy movement began. Fastcompany also quotes her saying, “What you get in this world doesn’t come from how much you ‘cultivate your talent’ but how much you ‘cultivate your name.'”

So come on, New Republic, be honest, is she really an example of someone who has “changed contemporary art” by fighting for “the cause”? I just don’t see it. If anything, the artist is just reinforcing the idea that financial success = artistic success.

In reality I’d say 99% of the “art” that came out of Occupy is agitprop. There’s nothing wrong with that, but why not call it what it is?