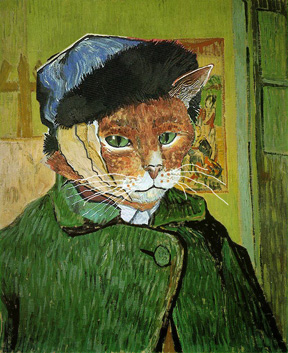 I’m not the kind of cat that’s going to cut off an ear if I can’t do something.
Bob Dylan (musician and poet)

What do I care about the purring of one who cannot love, like the cat?
Friedrich Nietzsche (philosopher)

My house is run, essentially, by an adopted, fully clawed cat with a mean nature.
Anthony Bourdain (chef and author)

The order of the world is always right — such is the judgment of God. For God has departed, but he has left his judgment behind, the way the Cheshire Cat left his grin.
Jean Baudrillard (philosopher)

A black cat crossing your path signifies that the animal is going somewhere.
Groucho Marx (comedian)

I care not much for a man’s religion whose dog and cat are not the better for it.
Abraham Lincoln (former U.S. president)

A man who carries a cat by the tail learns something he can learn in no other way.
Mark Twain (writer)

What I used to do between writing fits was feed my kids, ride my horse and go shopping for cat and dog food.
Anne McCaffrey (writer)

Let a man get up and say, Behold, this is the truth, and instantly I perceive a sandy cat filching a piece of fish in the background. Look, you have forgotten the cat, I say.
Virginia Woolf (writer)

Theology is never any help; it is searching in a dark cellar at midnight for a black cat that isn’t there. Theologians can persuade themselves of anything.
Robert A. Heinlein (writer)

I love Wagner, but the music I prefer is that of a cat hung up by its tail outside a window and trying to stick to the panes of glass with its claws.
Charles Baudelaire (French art critic and poet)

“But I don’t want to go among mad people,” said Alice. “Oh, you can’t help that,” said the cat. “We’re all mad here.”
Lewis Carroll (author of Alice in Wonderland)

It doesn’t matter if a cat is black or white, so long as it catches mice.
Deng Xiaoping (Chinese leader)

All day long the door of the subconscious remains just ajar; we slip through to the other side, and return again, as easily and secretly as a cat.
Walter de La Mare (English poet)

I do have 14 tattoos, but I also do come home every single night and watch reality TV with my cat.
Lea Michele (Glee actress)

When I took office, only high energy physicists had ever heard of what is called the Worldwide Web … Now even my cat has its own page.
Bill Clinton (former U.S. President)

Lana Del Rey seems to be bothering everybody because she allegedly “remade” herself from a folk singing, girl-next-door type into an electro-urban kitty cat on the prowl (of course I like her), and they feel she is inauthentic.
Liz Phair (singer)

It’s so French to be a cat person.
Melanie Laurent (French actress)

Always the cat remains a little beyond the limits we try to set for him in our blind folly.
Andre Norton (writer)

You cannot share your life with a dog, as I had done in Bournemouth, or a cat, and not know perfectly well that animals have personalities and minds and feelings.
Jane Goodall (primatologist)

God is really only another artist. He invented the giraffe, the elephant, and the cat. He has no real style, He just goes on trying other things.
Pablo Picasso (artist)

Every day, three times per second, we produce the equivalent of the amount of data that the Library of Congress has in its entire print collection, right? But most of it is like cat videos on YouTube or 13-year-olds exchanging text messages about the next Twilight movie.
Nate Silver (author and statistician)