Tess Thackara is one of our three art-and-conversation hosts for SLOW ART DAY, April 27. 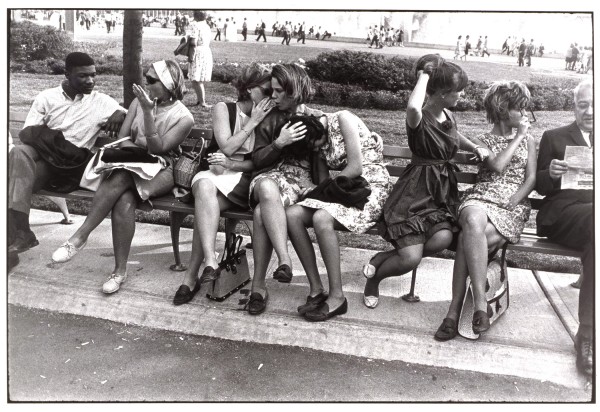 Wandering through the Garry Winogrand exhibit last week, I lingered on several photos longer than the rest because they seemed to give fragments of rich, unresolved narratives; because I could place myself squarely within them, whether in terms of reality or aspiration; or just because they offered an opportunity for unfettered people-watching. This photo falls in the latter two camps: the variety of gesture and body language is mesmerizing, a sense of rhythm and momentum carrying through the limbs of these eight anonymous individuals. I pictured the image transposed over a musical score with two bars, the row of bench-dwellers forming chords below, with the distant stick-people at the top forming tinkering minims and crotchets. But I also relate to the intimacy that these women share with one another, comfortable and at ease in their bodies and surroundings (and I particularly relate to the one in the middle, who has seemingly collapsed on her friend in a sun-induced stupor). I looked at these women, bookended by two men, for a little over 10 minutes, trying to let associations and memories surface and take precedence over the impulse to analyze, and then sat down to write one of them down.

London. 14. The stagnant months of June, July, August, when the long, listless days of vacation rolled out before you. Parks and picnics, ice creams from the ice cream trucks, sometimes a swim at the public pool or the Hampstead ladies’ pond, where naked pregnant women stretch out languorously, affording you time to stare beneath sunglasses at their glazed bellies. Lazing on blankets, feasting on hummus, bread, and strawberries. Napping under a soporific sun.

Rolling onto your stomach heavy-limbed and reaching out an arm to a girlfriend lying next to you. Resting your chin on folded arms, looking out into the grass green open space, watching figures in miniature calling and jostling, throwing balls and Frisbees and chasing dogs. You watch shadows move on the grass, the flickering echoes of her fingers as they silently dance to music streaming through her earphones. A distant siren wail emerges and dissipates. Focusing your eyes on a lone daisy and narrowing them slightly, a white halo of light forms around its contours. An ant struggles to surmount a quivering blade of grass. You twist onto your back and gaze up at a mangled branch, careening wildly into thick sky, bouncing and rustling in a gust of air. Letting your head fall to one side, your eyes gaze into open space, and close.