Leora Lutz submitted this review of the exhibition OPENING, curated by Taj Robinson and Nikki Mirsaeid, in response to an assignment in my dual-degree seminar at California College of the Arts. The ALTAR projects she discusses were on display at Episcopal Church of St. John the Evangelist in San Francisco, February 1 through 28, 2013. I invited Leora to share her perspective with the readers of Open Space.

When I arrived at St. John’s I was immediately struck by the intervention of contemporary works arranged beneath the soaring 20-foot Tudor gothic ceilings in the main room for worship. It seemed fitting to hold a curatorial project called ALTAR here. 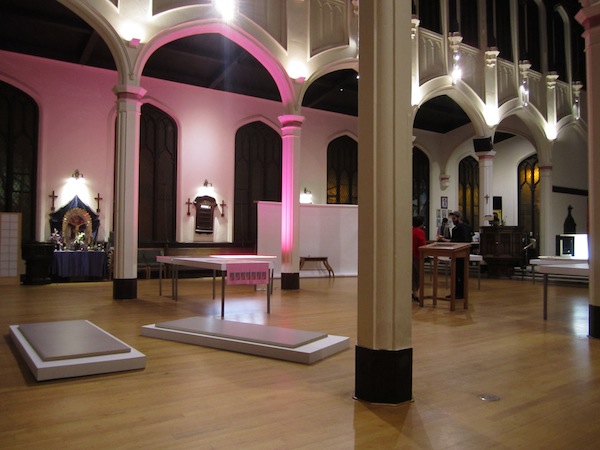 The premise for OPENING was to provide artists with 4-by-8-foot white plywood tables, and a single word prompt: “relic.” The theme served as a springboard to spark dialogue between the artists and curators to create site-generated works. The substrates acted as utilitarian parameters for the special challenges to accommodate the location. The challenges were in no way a hindrance, but rather enhanced the very nature of relic on multiple levels, conjuring up the patterns of ritual and the quandary of place.

Facundo Argañaraz’s work addresses the process of making arbitrary choices when gathering appropriated content for his work. His piece, Untitled (Standing Veil/Cardinal Ruse) (2103), is a vintage (circa 1980s) black-and-white image, enlarged, spray painted red, and mounted on a piece of angular aluminum that is inserted into the provided relic table. The woman in the image looked familiar to me, and prompted me dig into the far reaches of my mind to remember corrosive and edgy punk/post-punk shows at stinking, loud nightclubs when smoking was still allowed indoors. Upon doing some quick research, I confirmed the woman in the photo was Dale Bozzio, the lead singer of the New Wave band Missing Persons. In fact, the images are from a coffee-table book entitled, The Beautiful and the Damned: Punk Invades L.A., featuring photographs by Ann Summa. 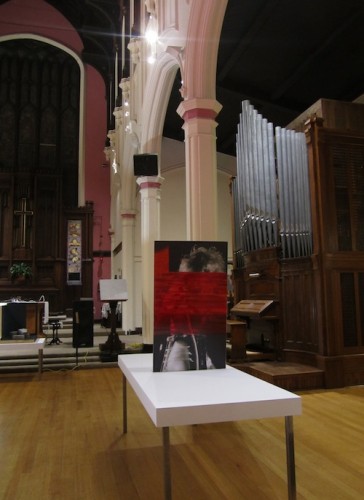 Argañaraz admits that the image could be anything — that the overarching concepts are more paramount than the specific reference. The images that he collects from books about art and culture act as symbols of sociological ephemera. In his words, “I use them — more or less — as forms (dead forms devoid of any intrinsic content) charged with formal pictoric [sic] value, as visual debris and remnants of cultural entropy.” I wondered, In what ways does portraying a once-iconic pop figure dislocate the viewer from or insert them within their own memory?” This, of course, is contingent on the artist and/or the viewer knowing the identity of the appropriated personality in the photo. Situating the sculpture in a church rather than in a formal gallery setting imbues the cliché and ironic connotations of icon and relic more readily; group participation, hero worship, and performance are confronting the passage of time, reiterating loss of the era, only to be conjured up here as symbols of bygones trapped in nostalgia rather than venerated.

Aaron Finnis is known for compulsive, immaculate work in which he adheres cassette tape ribbon onto panel or canvas in repeated, equal, and closely spaced lines. By removing access to the audio content, his process renders the original material useless as audio but at the same time pushes its new visual usage forward. CHROMA 1 (100 minutes) (2013) represents 26 minutes and 74 minutes of sound per panel. The pieces were intended to be installed as an upright, perpendicular diptych, however, unbeknownst to him until his arrival, the curators had placed the work on the floor. Finnis has the flexibility to compromise and took the position of amiable intervention in the face of such surprises. The decision to place the work this way proves to be a compelling solution that questions ordinary and formal expectations for viewing paintings as objects facing the viewer. Instead, the viewer is forced to look down almost in a pose of prayer, and the painted lines appear to be agitating and cause blurry vision as if in a trance. The experiential nature of this work created a strong complement to the site of the church and curatorial concept of relic.

Throughout the month of the exhibition there were also performances, two of which used the actual pulpit and sacrament table to set up their sound-boards. Kamau Patton performed a dark, slightly droning piece with spoken word. Because of his position at the sacrament table, Patton’s performance (aka TELL_) was vaguely reminiscent of a serious oracle, although the inaudible spoken word juxtaposed with the beats of the audio created a club-like vibe, with its audience standing in quiet contemplation. On the last night of the exhibition, Aaron Wacks and Miguel Serra (aka GALLS) provided an equally contemplative experience, albeit more layered and complex. Dressed in all black, their heads were covered in decorated black tulle that resembled anamorphic sea creatures. Serra was situated at the sacrament table, while Wacks played the impressive 1902 church organ. The lights were dimmed, and the two men were shrouded in abstract, pastel-colored projections. During the second performance Wacks also played the cello. In its entirety, the piece had all of the formal lows and highs that would be expected from a traditional composition, but within a very contemporary framework that bridged serious music-making with playful caricature. The audience was sent to a netherworld only to be driven back to the place of origin when the lights came up again, reminding us we were in a place of worship.

Leora Lutz is an artist, educator and writer. In general, her artistic practice shifts ordinary understanding into flux to create new audio and visual conversations. Her work has been shown at numerous public spaces, galleries, and museums, including Angel Island, Henry Art Gallery in Seattle, the Riverside Art Museum, and VOX Populi in Philadelphia, to name a few. As an art professional, she has worked with MOCA Contemporaries Los Angeles as communications cochair and for the Los Angeles Department of Cultural Affairs as a special community engagement project coordinator and grant process facilitator. In addition, she founded and curated a contemporary art gallery for five years and is a published writer of several art reviews and essays, most recently for Art Practical, the SF Emerging Arts Professionals blog, and SF Arts Quarterly. She is currently enrolled in the dual degree program for MFA in interdisciplinary sculpture and MA in visual and critical studies at California College of the Arts.