Finding My Place in History

Growing up in suburban Southern California I developed a rather indirect relationship with history. Except for the occasional Franciscan mission or Mexican rancho, I rarely experienced history firsthand. I felt like Indiana Jones if I was in a building constructed before World War II, and there were certainly no plaques or statues commemorating important events. Many suburbs exist as ahistorical landscapes with scant acknowledgment of what preceded the latest development project. Because of this, I learned to access history through books and photographs, rarely looking for it in my daily life. History was something to be found in texts, but not something to live.

After moving to San Francisco, I began experiencing history differently — I inhabited history. The things I’ve read about happened in the buildings I see all day, every day. Relics of the Gold Rush and the Gilded Age populate the city. I walk past a building as old as the State of California every morning on my way to get coffee. The transition from suburbia to history left me searching for the notable everywhere I walk, but it has also left me looking for the familiar in historical texts or photographs. When accessing my old modes of history I now try and find my place in San Franciscan antiquity.

Photographer Carleton Watkins, famous for his Yosemite Valley photographs, moved to San Francisco in 1853 and is responsible for documenting much of the city’s rise from western town to imperial city. Watkins’s stereoscopic photograph Golden Gate, San Francisco (1867) depicts the city as it was on the verge of flourishing. The photograph shows a budding town on the southern shore of the Golden Gate, the Marin Headlands just off in the distance. Atop Telegraph Hill, the two-story wood and brick buildings (in my mind they are all saloons and general stores) have been replaced by the altitudinous homes of the city’s aristocracy and feral parrot population. 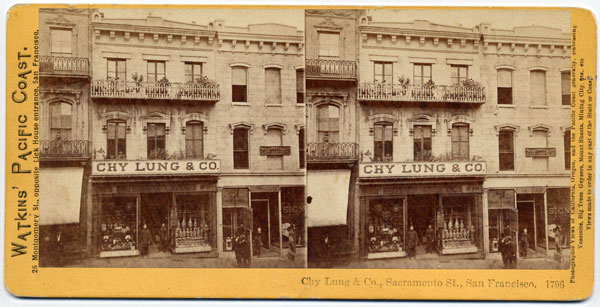 Just a few blocks away is the location of my first San Francisco residence, a Chinatown SRO. Another of Watkins’s stereographs, Chy Lung & Co., Sacramento St., San Francisco (c. 1872), documents my future neighborhood in its nascent days. According to the American Speaking Telephone Company’s 1878 list of subscribers, Chy Lung & Co, Chinese Mchts was located at 640 Sacramento Street at Montgomery Street, just a block from the building I would call home over a century later. The men walking by on the street aren’t yet in three-piece Gucci suits, but I imagine that roosters clucking in Chinatown flophouses is an amaranthine sound that will continue to meet generations of travelers and newcomers to this city.

Though I have lived in this photograph, it is unrecognizable today. The buildings here are also all gone, swapped out at some point for Citibank, East West National Bank, Bank of the West, and First Bank buildings, as well as the Consulate General of Israel and the Wells Fargo History Museum. The residue of these times, however, is not completely lost. Just out of view would have been Portsmouth Square, a critical plaza in the city’s history and the site of the first raised American flag, the first public school, and the 1848 announcement of gold found in nearby rivers. Easily one of the most important sites in the city, transformed but not gone, Portsmouth Square is still a hub of activity, as any tai chi or Chinese checkers enthusiast can ensure you. The square is the manifestation of over 160 years of history, connecting the times of Watkins to our own.

If one looks at Golden Gate, San Francisco long enough, one may realize that much more than just the architecture has changed. The shoreline is dreadfully close, engulfing the summer stomping ground of countless European tourists, a possible glimpse of what the city might look like in another 150 years. Around the time of incorporation, San Francisco’s mark on a map was dramatically different. Yerba Buena Cove covered what is now the Embarcadero and most of the financial district; its western extremity butted up right against Montgomery Street. Extreme sports fans could have probably used Telegraph Hill for cliff diving. Up the coast, North Beach was an honest-to-goodness beach. But as the city’s population exploded and the Outside Lands awaited being tamed, new territory was found by filling the sea. As the street flattened and the buildings rose, the shoreline was also extended.

History is palpable to any pedestrian in San Francisco who wants to find it. And a lot can be learned from historical records such as Golden Gate, San Francisco. But my experience of the city is transformed by combining these two approaches. It makes it easier to draw connections and fall through the rabbit hole of history. I don’t just look at buildings and appraise their age or view photographs and lament the losses they document. Instead, I understand the metamorphosis that has taken place and how it impacts my life on a daily basis.

Matthew Harrison Tedford is a San Francisco–based writer concerned with the politics of contemporary culture. His writing appears in the Huffington Post, DailyServing, Wilder Quarterly, Glance (California College of the Arts), the Oakland Standard, Poor Taste Magazine, and other publications. He was formerly a senior editor for Art Practical, where he still contributes.