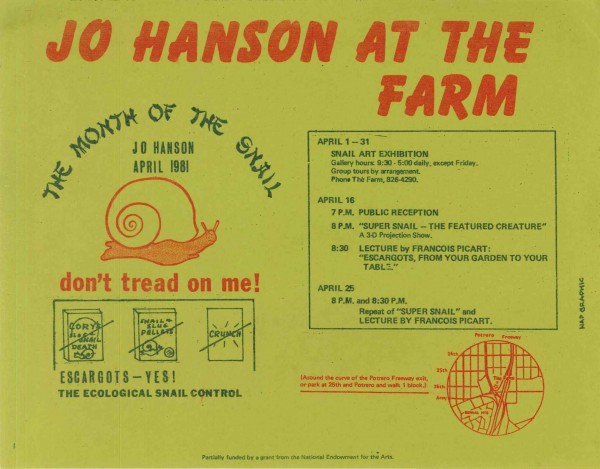 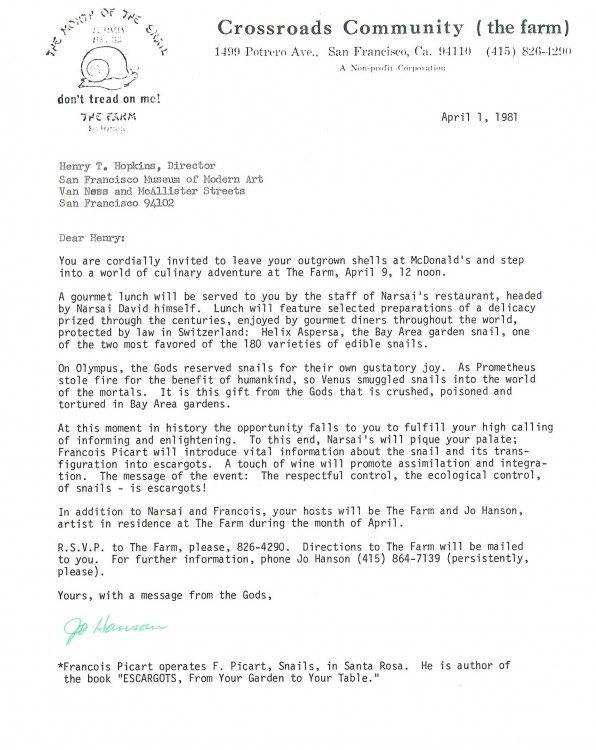 “Crawling on my belly in the garden, I photographed snails at their eye level and sometimes so close up the camera bumped into the snail. These images were often of exquisite beauty. I projected the images floor to ceiling, an unusual dimension at the time. A narrative discussed the life and history of the snail and ecological solutions to the problem of snails in the garden…The snail work began at The Farm in 1981 in a residency called The Month of the Snail – Don’t Tread on Me. The projection show was called Super-Snail: The Featured Creature. It went through many manifestations, the last one called Good Eats because it was set up like a restaurant in a storefront exhibition space.  Every Friday, we had a Happy Hour and served escargot. A big sign that read “Good Eats” hung across the storefront. — Jo Hanson, from “Small Leaps to Ascend the Apple Tree,” Women, Art & Technology, 2003

“After luring you with visions of beautiful snails in beautiful gardens, [Jo Hanson] insists that snails are food and tells you precisely how to collect them from your garden and make them into high-class eats. This exhibition grows out of long years of conflict in the garden, Hanson says, in which I learned how to deal with snails without insulting the universe. Snails are food-excellent and nutritious—and that is their natural control. The only snail problem in France is shortage.” — Q. Novelties announcement for Good Eats, 1982 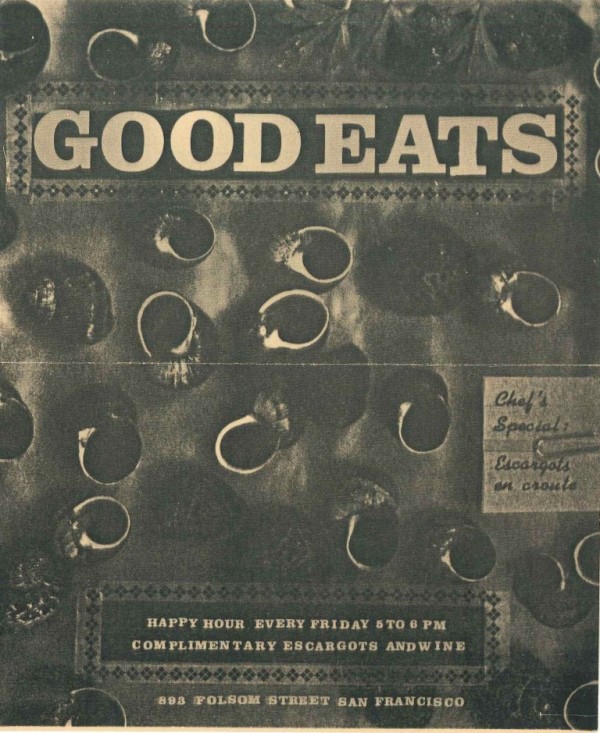 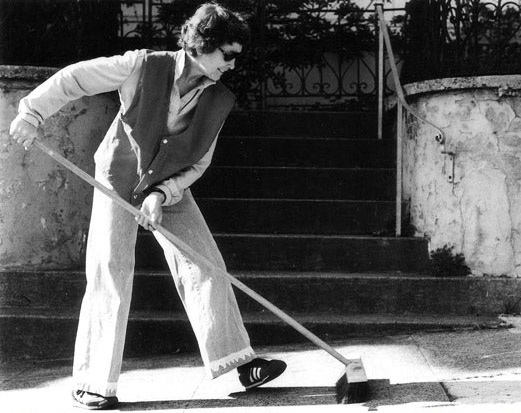 Jo Hanson, sweeping for the camera in front of her house, 201 Buchanan Street, San Francisco, “Art That’s Sweeping the City,” 1980.

“In 1980 I received a grant for an exhibition of the various facets of my work in City Hall (and the San Francisco Museum of Modern Art). The exhibition displayed artifacts from the street, my documentation, community vignettes, and the work and personnel of city street cleaning. Clearly, this kind of work reflected an on-going revolution in art and artists. I identified first with conceptual art’s advocacy of art as experiences or phenomena that could not be bought and sold. But it was feminist art that fulfilled the aims of conceptual art in empowering artists, collaboration among artists and with communities, advancing life and social experiences/issues as appropriate subjects of art. This was my trail in discovering that my work was ‘environmental art’. I have never felt related to the land artist of that period who used earth features and nature as their materials. In 1982, when the International Sculpture Conference met in the San Francisco Bay Area, I organized a Dada-style bus tour of illegal dumping in San Francisco. It provided unusual insights, as well as a good tour of San Francisco.” — Jo Hanson (co-founder of WEAD Women Environmental Artists Directory) from her essay My Adventures as an Eco Artist, 2003 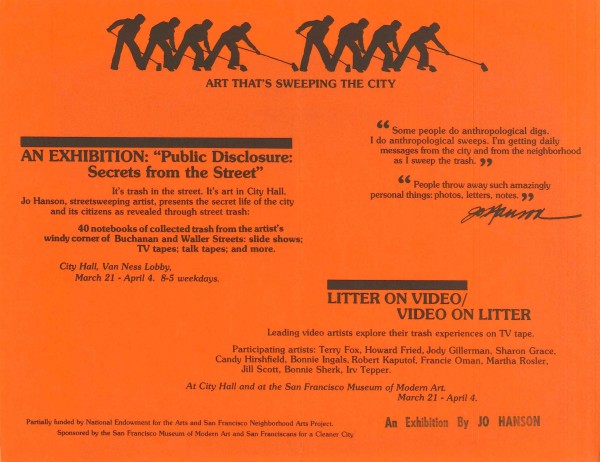 Transforming street trash into art and garden pests into artisan delicacies, Jo Hanson (1918–2007) developed a series of ecologically-oriented presentations that encouraged caring for and controlling the urban environment. In 1970, Hanson moved into an 1882 Eastlake Victorian (the landmark Nightingale House) and began restoring the building and its garden, which had been trashed by the former tenants. She then turned her attention to the trash regularly blowing in and trapped along her windy stretch of the Lower Haight. For Hanson, the waves of discarded waste not only evidence of a consumerist society, but spoke of an anti-establishment attitude associated with Hippie culture as expressed in the gesture of trashing the streets. In a similar vein to David Ireland’s restoration of his home at 500 Capp Street, her daily maintenance of the sidewalks turned into an artistic process. A decade later, Hanson’s street sweeping had led to engaging the systems of community organizations, government officials, and the media. This larger public initiative became the subject of an exhibition jointly organized by SFMOMA and San Franciscans for a Cleaner City in 1980. The presentation at City Hall included 40 notebooks Hanson had filled over the decade with the fragments of other lives—drug paraphernalia, protest march ephemera, bills, grocery lists, wrappers, and personal notes. In addition to video interviews with trash collectors, she solicited videotapes from artists that loosely responded to the theme of trash. The best known title in the program was Martha Rosler’s Secrets from the Street: No Disclosure (1980, Collection SFMOMA). Filmed in the Mission District, the work critically examined issues not addressed in the exhibition’s premise, namely the question of a dominant culture observing a subculture.

SFMOMA had been a tour venue for Jo Hanson – The Crab Orchard Cemetary in 1976, an installation that recreated through silk-screened tombstones, photographic murals, and ambient sounds the environment of her ancestral cemetery in Illinois. Hanson had also been included in SFMOMA curator Rolando Castellón’s zeitgeist The Aesthetics of Graffiti (1978) and later turned to making assemblage sculptures from salvaged materials. Her legacy of reusing materials continues today through the Artist in Residency Program at Recology (formerly Sanitary Fill Co.) that she founded in 1990.