This is part two of a two-part essay on “Until the Quiet Comes”- a film by Kahlil Joseph that recently won the Sundance Film Festival’s Short Film Special Jury Award. Part one of the essay covered the film’s opening sequences and their relationship to African cosmology. This concluding part of the essay focuses on what I perceive to be the central moment in Joseph’s stunningly brilliant film and it completes a deeper explication of this contemporary Black film viewed through a critical lens informed by African philosophy.

The oblique narrative created by this film sequence underlines how closely death dwells with life – and tragedy with ecstatic joy – under the constant reminder of police helicopters as ubiquitous as the summer sky over L.A.’s Nickerson Gardens projects. Boys running through a wide-open field with the type of abandon that you only have when you’re too young to think about the end of summer. What image could more depict the ecstatic vibrancy of life than that? 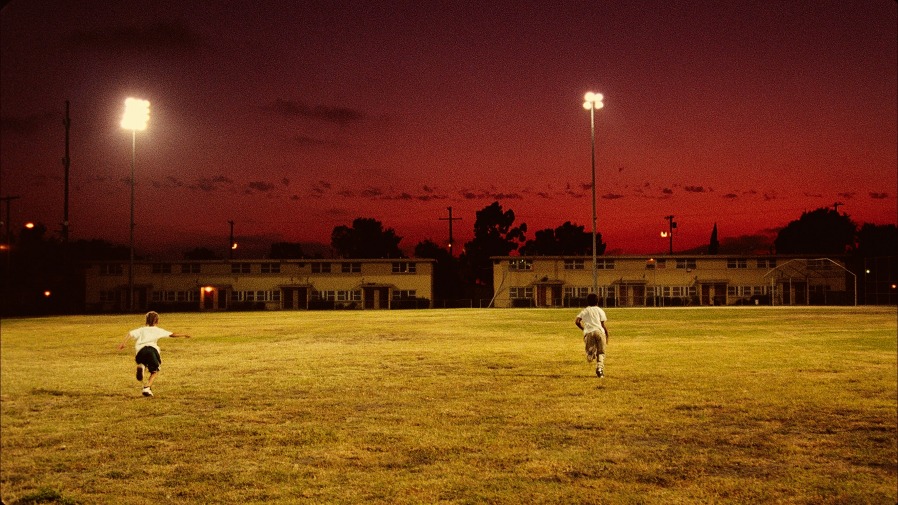 “Until the Quiet Comes” filmed in the Nickerson Gardens Projects. Los Angeles California

At this point in the film we see that there is a connection between the boy shown in the beginning of the film and the man portrayed by the Afriscape kinesthesia genius –aptly named – Storyboard. But although their interaction is a loving one, the nature of that connection is left unexplained. And as paradoxically as joy resides with pain, in this community loving interaction resides alongside a lethal self-hatred evidenced by Storyboard’s body lying dead from a gunshot. The disorienting emotional vertigo caused by the sight of the body is compounded by filmmaker Joseph playing with time and narrative by showing a scene in reverse of a man running past the dead body. Is he the shooter? Is he running before or after the gunshot? The water image appears again with a body motionlessly floating in it and again with just the empty blue water. The water signifier in Kongo cosmology reminds us that we are born in water and that Kalunga – the barrier between the living and the dead – is also a body of water.

Kongo cosmology has a specific acuity for the concept of time. The Bantu-Kongo have four types of time that are categorized as cosmic, social, natural and vital.  Kalunga -the supreme force of the universe – manifests cosmic time by the creation of events ad infinitum.[i] I read Kahlil Joseph’s treatment of time in “Until the Quiet Comes” to be in keeping with the Bantu-Kongo notion of cosmic time. He confounds the paradigm of a beginning, middle and end narrative – instead concentrating on the poetics of a moment. That central moment in “Until the Quiet Comes” is the instance when we see a community frozen in stasis after a murder. In that moment –not a measurable minute or second- but subjective time defined by an event, we see Storyboard lying on a concrete pathway – dead. He begins to move in reverse much like the runner in the previous scene. No, it’s not reverse. It’s something different. It is the uncontrollable spasmodic movement of a wakening soul. Muscle spasms make his soul/body pop up like the shouters in Black sanctified holiness churches when they “get happy” or are possessed by the holy spirit- his soul/body jumping while the community of living souls look on in frozen mute silence.[ii] Normally I would call him a dancer but Storyboard describes what he does with his body as being very much influenced by time-based mediums such as stop-motion animation and film. He exhibits a hyper awareness about his body creating a series of pictures that he “blurs together” in creative ways that play with time. Storyboard is the center of gravity for this film. He enables the film narrative to freeze the moment of death and allow us to watch the wordless language of a soul as it realizes that it is leaving this world. What he does is so poignant that I hesitate to call it performance and am more inclined to say that he is expressing the language of spirit possession written in his body. 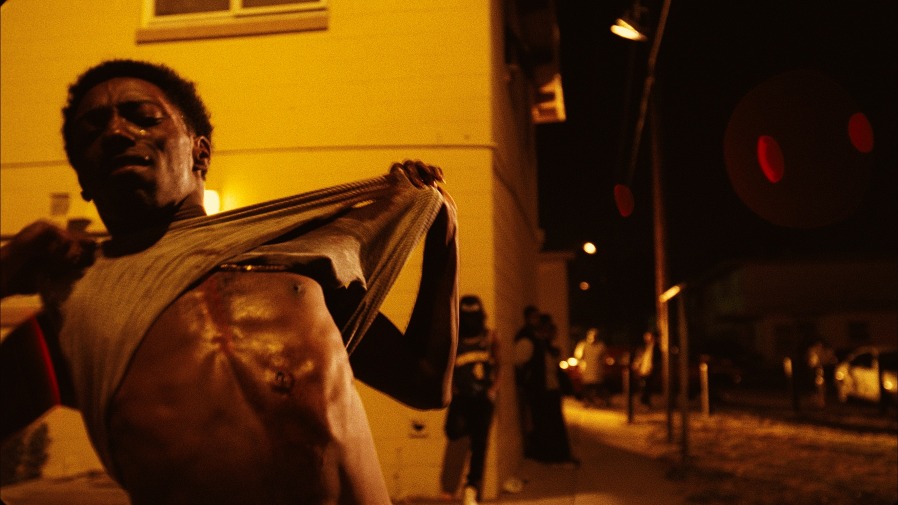 Storyboard P in “Until the Quiet Comes”

Each set of bodily manifested pictures that Storyboard creates in collaboration with filmmaker Joseph for this sequence illustrates the soul awakening to its condition of death. He leans back in an ambivalent posture as he is being uncontrollably drawn down the concrete pathway. The realization of what has happened to him sets in with the revelation of a bullet entry wound as he rends and tears at his blood stained t-shirt in an effort to dance his way out of his constrictions. His soul/body jumps up, finally eases down to submit to its condition and – in a moment of revelation- discovers how to move down the path in this new frozen cosmic time. Before he leaves this world he bows in a gesture of respect to one brotha leaning against a wall in upright repose. Storyboard’s genius with using his body for making what he calls “…pictures to music…” presents us with an image of his body/soul in an effortlessly masterful and fluid drift towards its destiny. And, along that way we see him becoming more comfortable with the revelation as his swimming flight brings him closer to his transition to the other side. 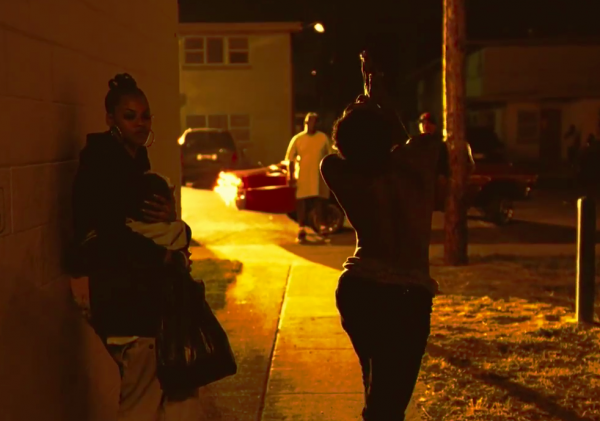 Film Still from “Until the Quiet Comes” Storyboard P in Prayer

He rises with head to the sky and hands clasped in supplicant prayer on his way to meet the ancestors. Having done that – he saunters, spins (counter-clockwise of course.) and moves in a willful manner towards his transport to the other side below the Kalunga line. Those gestures seem to acknowledge that he’s been freed from something because all semblance of a struggle has left him as he moves towards the lower side where the ancestors dwell. 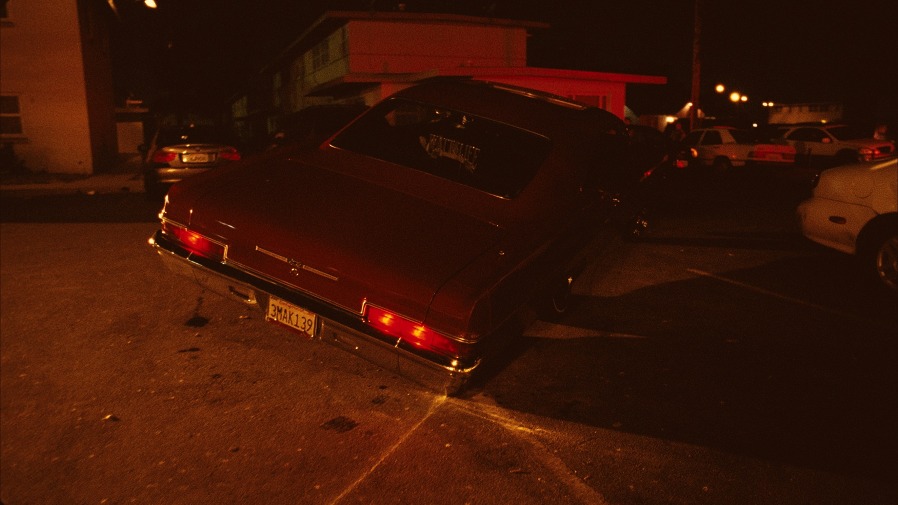 What better vehicle to take you to the low side than a low-rider? The sweet chariot bows and swings low to take him home. The elegance of its craft and motion makes us think of how the genius of vernacular art and urban engineering has turned the automobile into a vehicle that dances. In Oakland, illegal car/street party events have birthed a cultural phenomenon called ‘the Sideshow’ that marries hip hop, dance and car culture in an inter-disciplinary visual event where bodily dance movement is often mirrored by the wavelike car motions created by a skilled driver. The car in this film seems to bow for its momentary dance partner and in so doing becomes both signifier for transport and transcendence.  The improvisational genius of Storyboard emerges again as he enters the vehicle in a reverse birth-like movement through the car window that creatively avoids the more banal entry through an open car door. In so doing he underlines again the paradox of birth and death in Kongo cosmology. ‘Ghost ridin’ the whip’ indeed.[iii] 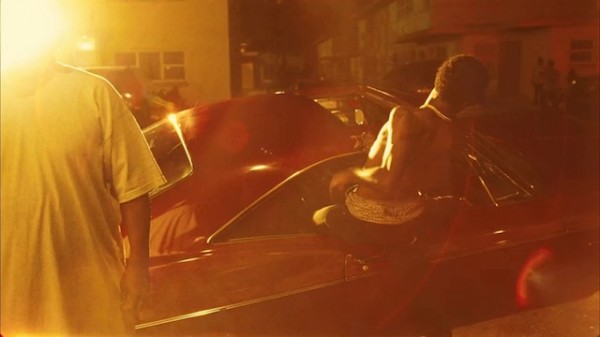 Afriscape sensibilities entail identifying the overlaps and commonalties in African cultural expression to locate them in an African and African diasporic cultural continuum. These sensibilities provide us with the insight to answer the question, where are African ways of being made visible in the contemporary expressions of African diasporic peoples? With “Until the Quiet Comes” Khalil Joseph has presented us with images of contemporary African diasporic people in a way that explicates Kongo cosmology and tacitly connects the metaphysical spaces of Kalunga to the everyday spaces of urban Black communities. His attention to making the image of water appear in the moment of death and having the film begin its narrative in stark summer daylight, transition to the setting sun and end with twilight is in keeping with Kongo cosmogenic notions. The Ki-Kongo cosmogram is often times called the “Four Moments of the Sun”[iv] and the left hand point on that circular ideogram represents the sun setting in the west. The moment of transition to the world of the ancestors is symbolized by the sunset and Joseph appropriately ends his film with moments that follow the sun setting in the far west Black Los Angeles California community of the Nickerson Gardens housing projects. Whether Joseph willfully creates these images as an intentional call and response to Bantu-Kongo cosmology or whether they have manifested innately from the imagination of an artist cognizant of Afridiasporic cultural phenomenon is moot. It is still the mission of the Afriscape cartographer to identify and explicate them whenever they are present.

[ii] Zora Neale Hurston, “Shouting,” in The Sanctified Church (Berkeley: Turtle Island 1983). “There can be little doubt that shouting is a survival of the African “possession” by the gods. In Africa it is sacred to the priesthood of acolytes, in America it has become generalized. The implication is the same, however, it is a sign of special favor from the spirit that it chooses to drive out the individual consciousness temporarily and use the body for its expression.” pg. 91

[iii] “Ghost ridin’ the whip” is a phrase associated with the sideshow streetcar phenomenon originating in East Oakland. It is a car maneuver that entails the driver getting out of the car and dancing next to the vehicle while it is in motion, implying that a “ghost” is in the whip/car.