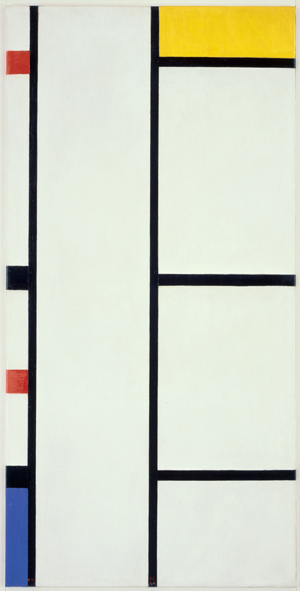 For a long time I went to SFMOMA just for Pollock. First, in a Danville school bus helmed by my rock ’n’ rollin’ high school creative writing teacher; later, BARTing in from Berkeley just to stick my nose in the lower left hand corner of Guardians of the Secret. “Jackson,” I’d ask the painting, “how did you do that? I wanna do that!” Still fascinated with the means of production, I now mostly beeline for Mondrian’s Composition with Red, Yellow, and Blue, 1935–42.

I kind of can’t believe it. Mondrian? Ya kiddin’! Me, into minimalist Modernism? Hungry for drama, I’m a proud product of Cal’s studio art program of the 1980s, the department’s golden years, before the institutionalization of what passes for critical theory had colonized the art world. We’d use our hands as brushes, substitute gallons of Standard Brands for neat little tubes of Rembrandt, stroll campus with stained clothes. Grime under our nails was a mark of pride, of identity. I am a painter. I am paint. It is me. We are one.

Call it intimacy. Call it the fusion of subject and object. Elmer Bischoff advised us to feel the paint. Once, for his figure drawing class, he canceled the model, instead toting in a boom box that played — I don’t remember exactly what except that it was classical — Beethoven’s Seventh, perhaps. He had us set our pads of newsprint and brushes and inks on the tables in front of us, close our eyes, and paint while pretending to be a violin, or a flute; by working to the beat. I later learned that Elmer was deeply committed to music, and as a child “taught himself piano and could play popular boogie-woogie tunes by ear” (Susan Landauer, in Elmer Bischoff: The Ethics of Paint).

In his essay “Liberation from Oppression in Art and Life,” Mondrian calls for art that “establishes dynamic equilibrium through a rhythm of forms, lines, and colors in a manner [evoking] aesthetic emotion.” Crazy about dance and music — particularly the African American rhythms of boogie-woogie, the start of rock ’n’ roll — Mondrian substantially revised already finished and exhibited work after immigrating from bombed-out London to New York in 1940. These so-called “Transatlantic Paintings” have been X-rayed to reveal the history of discrepancies between first and second versions. Interior views of Composition with Red, Yellow, and Blue show how paint was not only scraped out and replaced, as in “the lower red bar … painted in an area that was white in the first state,” but also obscured, as seen in the central black horizontal line (see Ron Spronk’s essay in Mondrian: The Transatlantic Paintings). The three-dimensional layering, resulting from Mondrian’s change of heart and mind, is continuous time joining the viewer with the artist, including the disruption of his move to the United States. “By reworking the paintings … the gap [between London and New York] was both registered and healed. In this sense, the double date he inscribed on the paintings was a cipher of the entire project” (Harry Cooper, in Mondrian: The Transatlantic Paintings).

Not long ago, wandering through SFMOMA, in a funk, perhaps, somehow I glimpsed Mondrian’s layered surfaces flickering behind a pane of dreadful protective museum glass. I was moved. My eyes started having a party, boogieing, making me feel like painting, making me time-travel to ’76, our nation’s bicentennial: I’m in the school bus, on my way to SFMOMA when it was still in the grand old Veterans Building; my beloved high school teacher hadn’t yet succumbed to AIDS, and Led Zeppelin was on the radio, Robert Plant’s voice calling, Jimmy Page’s guitar responding, and then they were one. Oh, Jimmy, former painter, war baby, born in the hard winter of 1944 less than a month before Mondrian died, you transfixing transatlantic boogie man, you make me wanna …

Emily Jain Wilson grew up in the Bay Area and received a BA in English and an MFA in painting from the University of California at Berkeley. She has been an affiliate at the Headlands Center for the Visual Arts and recently showed her work at the Patricia Sweetow Gallery.