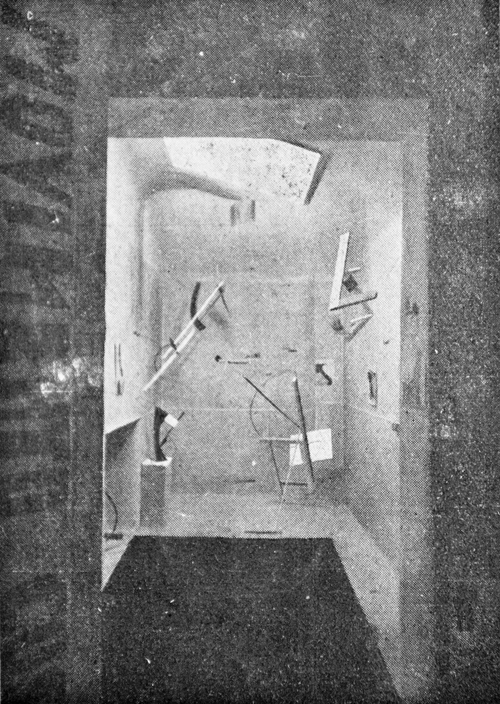 In 2013 SFMOMA will close for an expansion project planned to last nearly three years. Reflecting on the closure, grupa o.k. asked several friends and colleagues to imagine their own proposals for a museum in San Francisco. And now and then, the editors present “proposals” discovered elsewhere. Today: the Trieste Constructivist Cabinet.

The Trieste Constructivist Cabinet was conceived collaboratively by Edvard Stepančič, Avgust Černigoj, Giorgio Carmelich, and Josip Vlah in 1927. In an effort to overcome what they believed was the last problematic planetary force — gravity — they created this suspended installation in the pavilion Giardino Pubblico M. Tomasini in Trieste. This photograph was published that year in the constructivist journal Tank, where critic Willi Nuernberg wrote, “For the first time they have not tried to exhibit the objects, but they let them levitate from the ceiling on thin strings. With this the objects lost their earth-bound gravity and [so] their spiritual moment was heightened.”

Trieste itself is a fascinating city at the farthest northeastern point of Italy. It is located on the Adriatic Sea, and save a sliver of Italian land to the north, is surrounded completely by Slovenia. As a port city, it has been a hub of cultural exchange for a long time. For over five centuries it served as a prosperous commercial center of the Habsburg Empire, and it was annexed to Italy only after the empire’s dissolution following the First World War. A large Slovene ethnic group remained, but in the 1920s suffered persecution under rising Italian fascism and its policies of Italianization. In 1927 all Slovene organizations were dissolved and Slavic and Germanic names were in the process of being Italianized; for instance Avgust Černigoj, educated in Trieste, Munich, and at the Bauhaus, often used his Italian name Augusto Cernigoi. In the years leading up to the Second World War, Slovene intellectuals were emigrating in high numbers and a militant anti-fascist organization called TIGR emerged. That is the context in which this group of internationalist, avant-garde artists created the Trieste Constructivist Cabinet.

In 2011 Slovenian artists Dragan Živadinov and Miha Turšič recreated the project at the Museum of Modern Art in Ljubljana. They based their research on this surviving image and written descriptions from the time. Živadinov writes of the project, “In the Trieste Constructivist Cabinet, architecture as ambient and architecture as exhibit have come together. The cabinet is also an extraordinary work of art because the artists built into the artwork a competitive stylistic formation, Suprematism, in a meta-constructive way. They transformed the productive energy of the work into supremate ‘pure functioning,’ which manifests itself in the ambient with a levitational construction.”

A reproduction of this photograph and images of the recent reconstruction are currently on view as part of the exhibition Free Enterprise at the California Museum of Photography, part of the ARTSblock in Riverside.