Maybe Painting Has Died After All 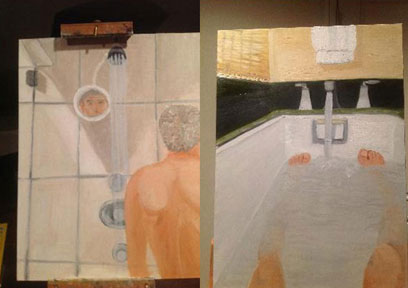 Paintings by George W. Bush went viral after a hacker exposed them.

Unlikely as it sounds, former president George W. Bush is apparently a Sunday painter. Several of his works were recently brought to light when a hacker broke into the Bush’s family email account.

The paintings are two self-portraits – one of him looking at himself in a bathroom mirror and the other is a point-of-view of himself in the bathtub looking down at his body.

Who knew that after eight years of being the most powerful man in the world he would turn to painting? It’s possible that he was painting all along but never told anyone. It’s not so unusual really – after all, many world leaders have turned to art at some point to express themselves. Winston Churchill, favored landscapes, Dwight D. Eisenhower, painted landscapes and portraits, while Prince Charles who mostly paints in watercolors generally donates his paintings to charity auctions.

But George Bush –  his paintings – at least the ones we’ve seen –  are so strange that they remind me of several things that are completely unrelated, like a surrealist poem. Crudely copied early David Hockney paintings. Ophelia’s drowning scene in Hamlet (and the John Everett Millais painting of it). Michael Jackson’s hit song Man in the Mirror. All of those come to mind. The paintings of Sylvester Stallone come to mind as well.

Of course, others have responded to them in different ways. Hrag Vartanian from the legendary New York art blog Hyperallergic said this:

Maybe it shouldn’t surprise us that the man who brought us a vision of compassionate conservatism would turn to art to express the angst of a crappy Presidency that got us into two wars, used homophobia, racism, and sexism as an electoral tool, crashed our economy, and made the world hate America.

And even more succinctly, Jerry Saltz wrote in the Vulture:

Bush regards himself, yet nothing untoward is showing or seen. He is chaste and untouched even when alone. We see his knobby knees and his toes peeking up above the running water.

Who knows, maybe at the next Armory Fair some brave gallery will feature an all George Bush booth and sell out. What could be more surreal?