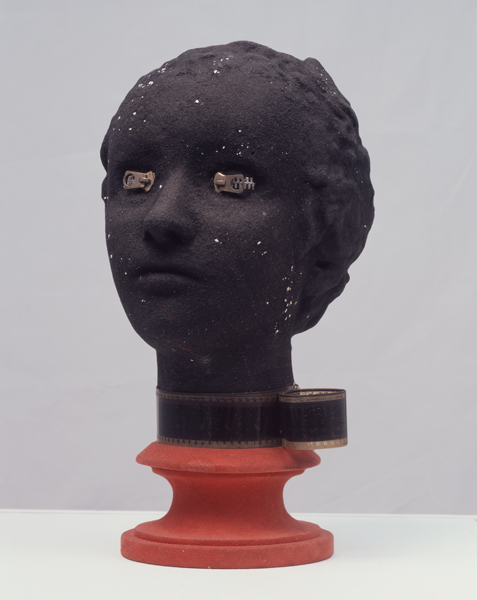 This work evokes a sphinx-like enigma through its closed zipper eyes. I really wanted to touch the zippers and open them to reveal an interior world. The constellation-like pattern on the velvety face creates a cosmological connotation, as though she holds a hidden key to the secrets of the infinite. Perhaps she houses chaos in her fathomless depths. The work was originally known as Secret of the Gardenia, but according to historians, this was an accidental misprint in the exhibition materials. I see how the surrealists would have liked the chance revision of the title, as they were open to encounters with the uncanny. Her 35mm choker makes me think of a cinematic, celluloid tactility that is rapidly becoming a thing of the past with the transformation of the film exhibition landscape. Perhaps the imagery on the strip could be a nitrate memory record from the mind of an ineffable being. Or could it be a fragment from the lost film that the original title references? We’ll never know . . . 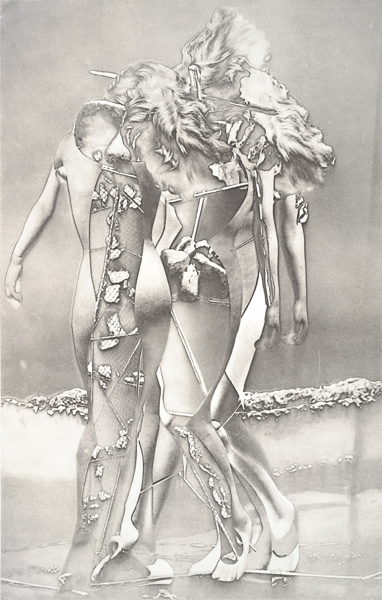 A fiery profusion of hair shimmers across the upper portion of this print. The Sabatier effect. Evidently the title was inspired by a book by André Breton that describes themes such as the relationship between waking and dreaming. Before investigating Ubac I was unfamiliar with the collotype photographic process used here to eloquently depict three mercurial female forms. Their bodies are fused together as if melting into one another and one of the forms is being carried with lifeless arms and hands that defy normal human symmetry. The crest of foam swirls in the background as though the figures arose from a primordial ocean. 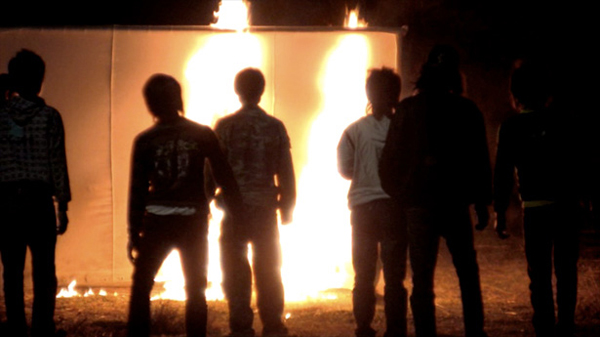 It starts out simply: a seemingly floating fluorescent light with an ethereal glow is foregrounded against the darkness of the night sky. Shadows of trees wave slightly in the background. Lightning striking the ground brings forth associations of both creation and destruction. These bolts remind me of laboratory experiments performed in the 1950s by Stanley L. Miller, who demonstrated a compelling theory of the origin of life. When Miller exposed molecular compounds and water to an energy source such as an electrical discharge, the reaction produced the amino acids essential for the formation of living matter; Apichatpong creates a striking synthesis of elemental forces, luring the viewer in.

Traces of light from a fiery ball race across the film frame as boys play a whimsical game of sparkling and crackling delight. The element recalls ancient associations with Prometheus, the fire-bringer. The boys ultimately cause the destruction of the screen, leaving a low rumble of thunder as the only remnant of the video that was being projected.

On an elemental level Apichatpong is working with different representations of light: the man-made fluorescent tube, the mysterious bolts of electrical discharge from lightning, the fireball, and the projector beam with its light sprays caused by the refractions on molecules of water and smoke in the atmosphere.

Apichatpong has created a preternatural examination of the screen itself. The “Nabua” in Phantoms of Nabua is not only the name of the Thai village where it was shot, but the title of another work, shown rear-projected onto the screen within the screen. At first this nested image appears in the lower left section of the frame. Later it’s incorporated into the environment, which creates an otherworldly quality to the scene, one that the young boys seem to be totally unaware of. Sometimes a self-reflexive trope has a distancing effect on the viewer, but here it is seamlessly integrated with the background so that one is not at all certain about what is happening. It establishes this meditation on destruction and creation within a cyclical interplay. For a short moment a young boy stands in total shadow in front of the screen. He becomes a black silhouette struck by lightning bolts. The illusion is unsettling and startling, and calls forth electricity as a giver of life, as in James Whale’s Frankenstein.

The teenage boys kick their fireball into the screen and this act draws them into observing that illusion bearer. After the screen has become completely consumed by fire, the video projector continues to emit its beam of light directly at the camera and viewer. The projector beam creates a shuttering beacon like that of a lighthouse, and makes the three-dimensional form a blinking eye of light.

Phantoms of Nabua calls to mind Anthony McCall’s expanded cinema work known as Line Describing a Cone, which I have experienced many times over the years. It’s a work that explores (among other things) the space between the projector and the viewer by creating an ephemeral, three-dimensional cinematic sculpture. This work combines pure white light and an infinite geometric vertex to create malleable solids intertwined with the ephemeral notion of time. Likewise, by the end of Apichatpong’s piece, the viewer is receiving communication directly from a projector beam, in this case a phantom message from Nabua via cryptographic light and soundtrack.

When experiencing this moving-image artwork in a gallery, projected large, one becomes immersed in a primordial reverie. The boys appear life-sized and are presented on the same plane as the viewer, and this illusion invites us to become part of their realm. There is an example of Phantoms of Nabua online, but I hope that readers will soon be able to experience it in a gallery setting, as it was designed to be seen. In the meantime, another Apichatpong work, Morakot (Emerald) (2007), is on view at the Berkeley Art Museum from February 15 through April 21.

Kerry Laitala is an artist who works with many forms of moving images, from expanded cinema performances to 3-D single-channel videos and installations. She is currently a film instructor and chair of the San Francisco Art Institute film department. She has recently begun a project recording electrical discharge traces using objects in her studio for a series of tribute portraits to the living and dead. An award-winning filmmaker, Laitala has screened her work internationally; her website is at kerrylaitala.net.