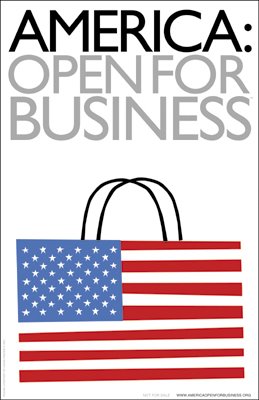 This is the last in the (Re)Brand series, all of which can be read here.

It was a month or so after 9/11/01. The country was still reeling from the attacks on that day and the economy was in a deflated, tech-bubble free fall. Slowly,  an “America: Open For Business” poster, designed by local artist Craig Frazier, began appearing in shop windows all around the Bay Area. I was barely making ends meet, having just started my own design practice, so I was grateful for any form of moral support. Nonetheless, when I first saw the poster, it made me sick to my stomach.

I had been coming off the sudden death of a close friend, a near-fatal miss on 9/11 (that’s another story), and was attempting to muster up the idealism and energy needed to start a design business in the midst of a recession. It was a confounding, emotional time that yielded brash and irrational thoughts about my work, my country, my life. Frazier’s reducing America’s response to essentially, “Go shopping and forget,” was deflating. Was this really the best we could put forward as designers? As Americans? A teaching colleague remarked about the poster’s cleverness and all I could do was scoff. Clever? Is that really all we have? Clever?

Today, I am slightly more sympathetic to Frazier’s comforting aims, and the conceit now seems much more innocent and harmless. It’s only a poster after all. Yet its naïveté is also why it still grates more than a decade on. The poster reduced the complex issues and problems then facing our nation to what is basically a get well card. (And, arguably, for a terminal disease.) And lest I come off as a left-leaning socialist, I was equally dismayed with Modern Dog’s “Fuck Bush” poster of 2005. Not that I didn’t agree with the sentiment or admire the force of their convictions. I just knew deep down, that after that initial halcyon high of sticking it to George W. via silkscreened profanity, the dialogue it might foster would hardly be productive. (And, admittedly, that probably wasn’t the point.) 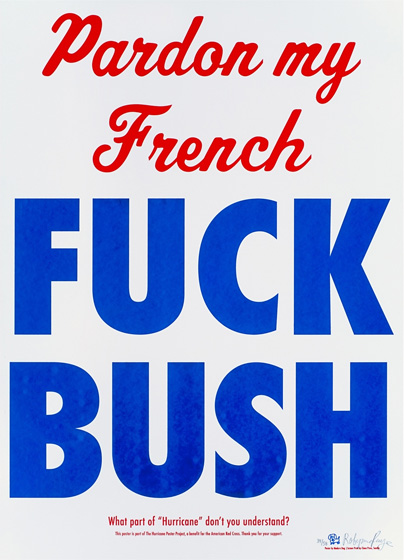 Design and politics share the frequent practice of synthesizing the complex into the bite-sized for easy consumption. Anyone who has watched C-SPAN for longer than five minutes knows that the grinding gears of representative democracy rarely produce must-see TV. Engaging our populace in government, for better or worse, requires mediation. Better, that it encourages more people to participate; worse, that the issues are inevitably simplified or even warped to forward an agenda. Sounds like the standard operating procedure of Fox News or MSNBC, right? Sounds like a methodology for nation (or any kind of) branding, too.

I’ve always been ambivalent about this part of my work. Maybe because ambivalence was often baked into my design education of the early 1990s, when design was rejecting the less streamlined, utopian promises of modernism and embracing of a more fluid, questioning methodology goaded on by new technologies and the rise of postmodern thought. While this heady period was short-lived (a demise brought on as much corporate culture’s embrace of design as stylistic and technological shifts) its forwarding of the interrogative, the complex, and the ambiguous has always stuck with me. Branding, though, has no patience for the vague or the imprecise. A cynical view of this practice casts designers as pied pipers who peddle narcotic, utopia-promising harmonies that lull audiences into comas of lazy thinking and consumption. A more optimistic one sees our new technology-enabled, übersocial environment as a system that, through sharing, inevitably self-corrects any false propaganda being delivered from on high. (Clay Shirky speaks of this phenomenon very lucidly in his TED talk.)

My hope with the “(Re)Brand USA” project was to inject some ambivalence into a practice that rarely makes room for such, cultivating work that fulfills the project brief but also opens up a critical discussion around both the “brand promise” of the United States and the notion of nation branding itself. Jeremy Mende, MGMT. design, Playlab Inc. and Lucienne Roberts all deliver on these aspirations. Mende and MGMT lure us in with familiar vehicles and symbols that usually present idealized visions of our country, but then upend them to reveal a more “true” United States, warts and all. Roberts, true to her status as the lone foreigner in this group, presents a simple GIF animation that “is a celebration of difference and inclusivity” by playing on the double interpretation of “us” in this context. Even Playlab’s solution, the most unequivocal endorsement for the U.S. of the bunch, uses the messy nature of America as the basis for its fêting: “America doesn’t want a constant brand.” (Italics mine.)

I thought about these projects on a visit with my wife’s family last week. It’s safe to say that the visiting couple from San Francisco are usually the only liberal-leaning ones occupying the suburban Chicago living room, and politics are usually off the conversational table. This time, though, I did engage some of my in-laws in such talk, but what distinguished these discussions from past tense ones was that they weren’t specifically about the president, or parties, or elections, they were about actual issues—the fiscal cliff, entitlements, and public education, primarily. Pleasantly surprising was that our dialogue was not only congenial, but revealed, if not complete alignment, agreement more often than not.

And that’s when it hit me. The problem is not that we have untenable differences, it’s the current filters that cast everything in us vs. them, all or nothing terms—whether it be politicians, television commentators, religious leaders, on down to communication designers. One could argue that this reasonable middle ground is exactly where Obama sat in his first term and the strategy failed miserably. And that the radicalism of the Occupy and Tea Party movements are what made them successful. Being cordial is nice and all, but politeness doesn’t bring about change. Then again, how’s that latest Congress working for you?

It’s not as much the what that’s at issue here, it’s the how. (How postmodern!) Strip the polarizing mediation away and the equation becomes, as Lucienne Roberts poses, us is them. I’d bet that a majority of Americans are reasonable, essentially moderate-leaning people that simply get caught up in the competitive fervor that extremists on both sides stoke through the multiple media channels available, from television networks on down to anyone with an internet connection and a computer.

Certainly our branding practitioners could be accused of forgoing the what for the how, since the “what” can often be somewhat lacking in interest. All four designers that contributed to the (Re)Brand USA series used inventive, approachable methods to get their ideas across, but it was still the complex, progressive, and nuanced messages themselves that mattered most. They made us rethink not only how we might present our country, but the country period.

A presidential inauguration is as good an excuse as any to hit the reset button and start from zero. As we watch Barack Obama’s second term commence today, maybe one resolution is to enable more discussion in the vein of these (Re)Brand USA projects, rather than stoke simplistic conflict.

(Well, one can hope anyway, right?) 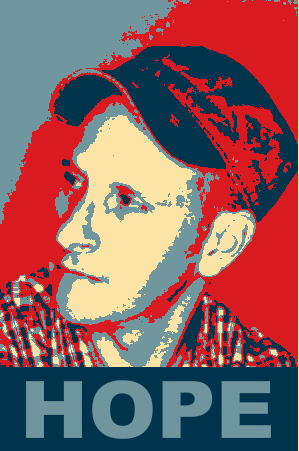