Proposal for a Museum: Paulina Ołowska, Yael Bartana, and the Museum of Modern Art in Warsaw

Today: Paulina Ołowska, Yael Bartana, and the Museum of Modern Art in Warsaw. 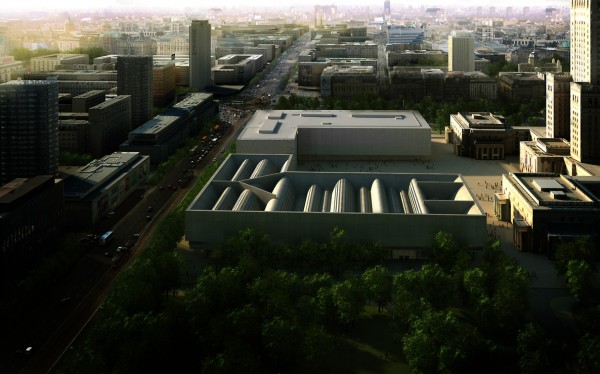 Above is an image of Christian Kerez’s projected plan for the Muzeum Sztuki Współczesnej (Museum of Modern Art) in Warsaw, Poland. It’s a building that will never be constructed. The emergent institution of art, the city, and its Ministry of Culture and National Heritage had aimed for an ambitious design to “revitalize the center of Warsaw,” a venerable neighborhood that was one of the few left standing after the Second World War. The contemporary museum was to have served as a direct rebuke to the Palace of Culture and Science — the unwanted and unloved “gift from Stalin,” imposed by Soviet occupiers — visible at the image’s right edge. 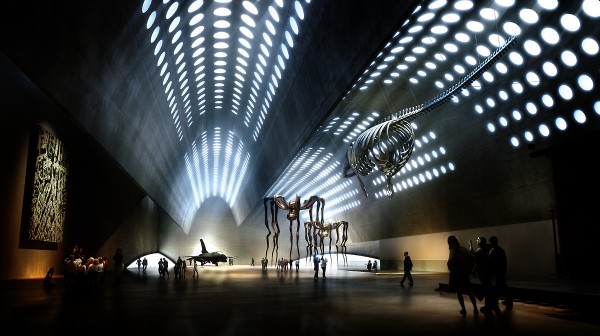 Kerez’s building was controversial from the start. After a general competition in 2006 (whose terms, writes architecture critic Marcin Szczelina, were “poorly and oddly constructed”), the minister of culture and president of Warsaw selected the Swiss architect’s relatively minimalist design, against the will of MOMA Warsaw’s then-Director Tadeusz Zieleniewicz, who had been dreaming of something more spectacular. (Going by the plans, the design looks plenty ostentatious to us.) Zieleniewicz left in protest, and was replaced as director by the renowned curator Joanna Mytkowska. Yet even with her leadership, problems compounded: the media decried the Kerez project as resembling a “supermarket,” and endless struggles began over design, schedule, and the city’s changing plans for development, including competing ownership rights to the land on which the museum was to be built.

After numerous delays and disputes, in 2011 the architect threatened to withdraw from the contract. Two days later the city terminated his employment and discarded his design. Legal battles ensued. “Six years were wasted!” lamented Szczelina. 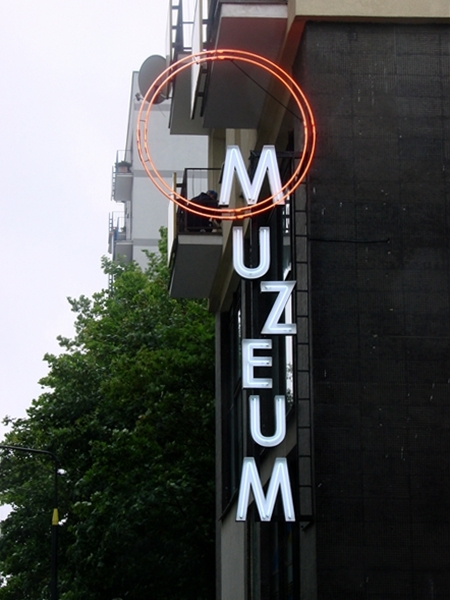 In the midst of these battles, the museum had found a temporary residence in the former home of the Emilia furniture pavilion, built in 1970. A unique hybrid of modernist design with big-box store, this exposition hall actually was the commercial space that Kerez’s design had been accused of simulating. Paulina Ołowska’s 2009 artwork Muzeum — a neon commissioned for the exterior of this temporary site — therefore bore the crucial task of nominating this building as a museum. With Ołowska’s characteristic lightness and humor, the sign intervenes in the imaginary of the Warsaw public, yet at the same time offers a burlesque of any Bilbao-esque aspirations to grandeur. The neon looks as much like the signage for a nightclub (an impression confirmed by the work’s installation-version, with its smoke machine) as for a self-serious institution of global import.

Israeli artist Yael Bartana produced a different, darker image of MOMA Warsaw that year, as optimism about the museum began to unravel in a miasma of bureaucracy and populist misunderstanding. The second film of her controversial “Polish Trilogy” — a complex, politico-aesthetic call for the Jewish diaspora to return to a Poland they had fled during the Holocaust, staged in three films, as well as installations and a website — depicts Zionist kibbutzniks building a collective farm on the disputed site of the future museum. As they build, however, the Wall and Tower of the film’s title begins to resemble less the utopian kibbutz than the prison architecture of a concentration camp. 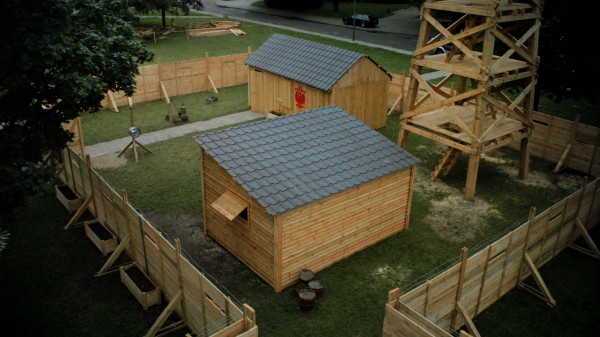 Leaving aside the larger debate that this body of Bartana’s work has occasioned (about nationalism in Poland and Israel, the ethics of art, and so on), her film seems to us equally a “proposal for a museum” on the most negative and pessimistic terms possible: the modern museum as a kibbutz for art, defending against the (perceived) bigotry and blinkered nationalism of a hostile culture; or worse, a brutal encampment where art might be contained, deprived, and finally, exterminated.

With friends like Bartana, who needs enemies? Still, it’s hard to imagine that with a director of Mytkowska’s ability and vision, the project for a Museum of Modern Art in Warsaw is completely dead. It may still be built. The form it takes may be a distant cousin to the dramatic exhibition halls of Kerez’s vision, and it may be sited elsewhere in Warsaw. But in a city where art exhibitions provoke impassioned public debate, and anti-fascist demonstrators congregate on the steps of Zachęta National Art Gallery (as they did last Sunday), such an institution promises to be a vital part of public life. And when such a museum of modern art does come to life, all of these embarrassing growing pains may seem a distant memory. Oby!

Find grupa o.k. on Tumblr and read other proposals here.