Proposal for a Museum: Nikolai Fedorov, Philosophy of the Common Goal (19th cen.)

Via Boris Groys, “The Artist as Curator of Bad Art,” in Exposition Imaginaire: The Art of Exhibiting in the Eighties, Rijksdienst Beeldende Kunst, ‘s-Gravenhage, 1989:

Russian philosopher of the late 19th century Nikolai Fedorov created a so-called “philosophy of the common goal,” which was to organize the entire technical potential of humanity in order to realize, on a scientific basis, the artificial resurrection of every person that ever lived on earth. The first stage on the road to realizing this “common goal” — its grandiose prospects influenced many leading Russian scientists, poets, artists, et cetera — was to be the establishment of a single museum, where everything that testified to the life of everyone who ever lived would be exhibited and in the future could be used for his resurrection. In some sense [Ilya] Kabakov’s installations can be seen as a simulacrum of such a museum. But, in the reality of irreversible history, this museum still awaits its curator. 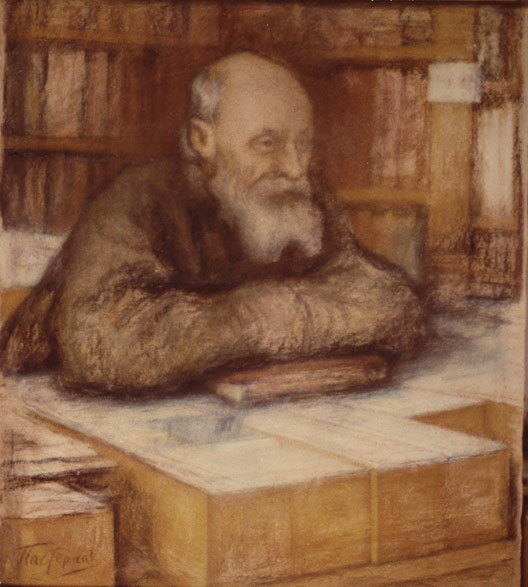 Leonid Pasternak, Nikolai Fedorovitch Fedorov, pastel, late 19th c.— drawn surreptitiously while the philosopher was at work at his day job as museum librarian at the Rumiantsev Museum.

Via Nikolai Berdyaev, “The Religion of Common Resurrection: The Philosophy of the Common Task by N. F. Federov,” an unpublished manuscript from 1915, as translated in 2002 by Fr. S. Janos:

In burial there is already the principle of resuscitation. Man is a being, which buries — here is an essential definition of man. With this is connected Fedorov’s love for museums, as seeds of resuscitation, and his dislike for exhibitions, as a betrayal of the fathers and self-exalting. Just as with the church-temples, museums ought to be cemetery-like. “Only a cemetery can be transformed into a complete museum, rather than museum cabinets of only the rare, such as with present-day museums. Only the cemetery-like museums are memorials for all the people without exception, rather than of merely some of the great; only cemetery-like museums make all an object of knowledge and for all to be known, if they be not separated from the schools.”

What Was Man Created For?

The Russian Cosmists: The Esoteric Futurism of Nikolai Federov and His Followers