My Gross New Year in Paris 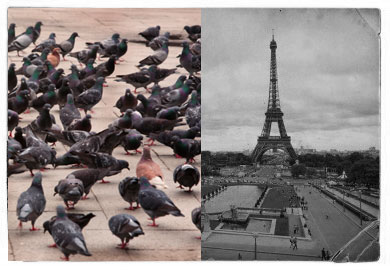 For quite a few years I was lucky enough to have some friends living in Paris. Most of them were going to École des Beaux-Arts for photography. They would let me come stay with them for a week or two and we would go out to clubs, drink, smoke cigarettes, and spend half the day making and then eating breakfast in our underwear. But on one trip I experienced one of the most disgusting things I’d ever seen, which I saw alone when I was sleep-deprived and hungover, after a night dancing with friends. In fact I think I’d only had about two hours of sleep. I was basically really, really out of it.

I always thought that the most disgusting thing I ever saw might have been art if I had photographed it. Of course the one time you need a camera — you don’t have one.

Anyway, it was in 2003 and I had been out all night with one friend but had to meet another friend early in the morning. So after the club let out around 4 a.m., I crashed on my friend’s couch for a couple hours. Then at 7 a.m., with hardly two hours of sleep, I got up and walked down the 300-year-old wooden stairs and out into the cobblestone courtyard below. At the end of it was a big, green metal door that opened inward. I fumbled with the unfamiliar lock and pushed and pulled until finally it went “click” and opened.

So I stepped out onto a cold, quiet street — Boulevard de Belleville — and before I saw it, I could smell it. I walked a few feet and saw a pigeon standing in a large puddle of what looked like it had been a burrito at some point, or a very chunky soup, or perhaps several smaller meals eaten over time. Not a soul was awake and nobody was visible on the street. Whoever did it was nowhere to be found, but it was clear they had just vomited it up right in front of my friend’s place. And there was a pigeon standing in the middle of it pecking out the good bits.

I stood stood there involuntarily — I was so tired and not feeling well myself — and the filthy pigeon was simply devouring the meal unaffected by the yellowish liquid on its beak and feet.

Not being able to deal with it at that particular moment I just walked away. The smell was so awful. I walked with my hands in my pockets to keep warm. Then to my surprise just a few hundred feet away I saw another pigeon — a different one — but this one was even worse. The “burrito” was bad, but I kid you not, either a dog or a very troubled person had gone and taken a poop on the sidewalk near a doorway. The pigeon was standing with one foot on the little brown log and one on the ground. The gross little bird was balancing itself so it could peck out the little bits of corn and whatever else it saw that it liked. Yes, it had brown mess on its beak. Amazing. Disgusting. Paris.