Receipt of Delivery: No Nothing Cinema 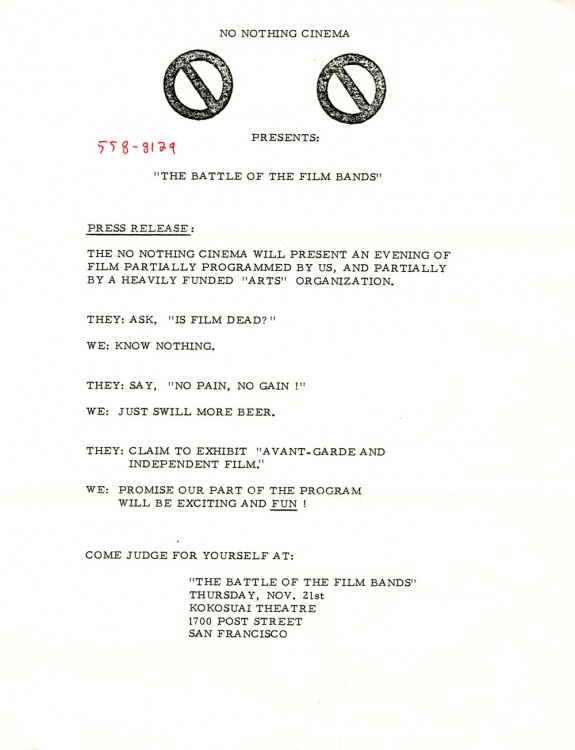 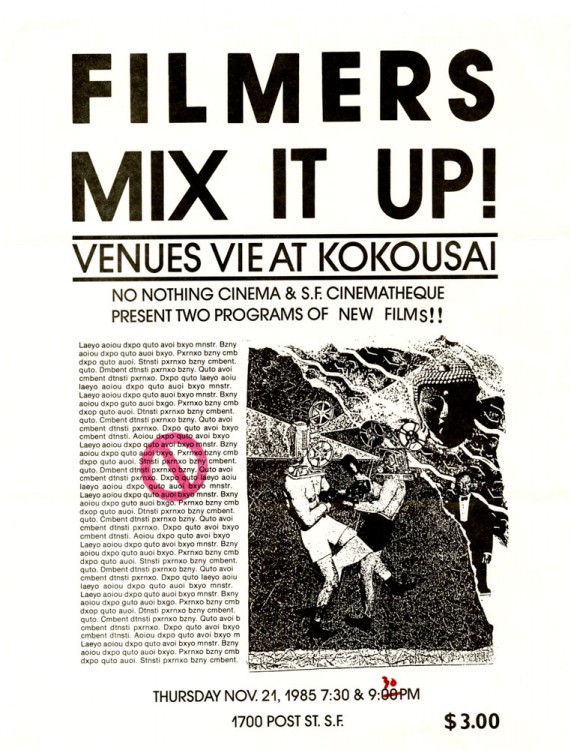 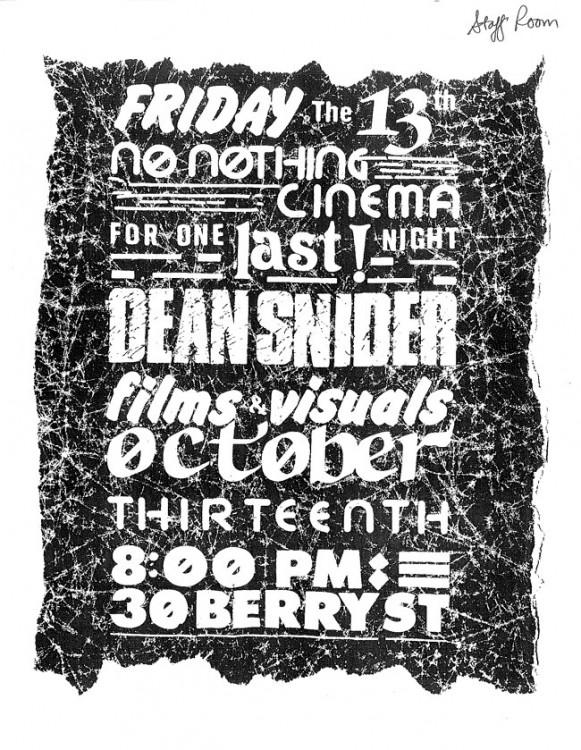 The No Nothing Cinema vs. San Francisco Cinematheque battle alluded to in the above 1985 flyer began with a major surprise attack in 1981. A group of filmmakers staged a legendary, rebellious takeover of a Cinematheque screening in protest of its programming. The plug was pulled on the projection booth, a manifesto was read, and a new program of short films was shown instead. Frustrated with being relegated to the Emerging Filmmaker showcases or not shown at all, they renamed themselves “emergency filmmakers.” The action was not only a call for better representation of the current work being made by local filmmakers, but broadening the types of experimental film supported.

The uprising precipitated the founding of No Nothing Cinema on 30 Berry Street a year later, as well as subsequent changes at the Cinematheque. For a full account of the ideological struggle, see Steve Polta’s incisive “Emergency Cinema” in Radical Light: Alternative Film and Video in the San Francisco Bay Area, 1945–2000. It includes the perspectives of key figures from both sides, such as Lynn Marie Kirby, Mark Sterne, and Marian Wallace, who were active in the protest.

Dean Snider, a former Cinematheque projectionist and key mobilizer of the action, was instrumental in the creation of No Nothing Cinema, which opened on July 4, 1982, with the statement: No censorship, no cross, no crown, hot barbeque, cold drinks. In addition to creating an open context and relaxed atmosphere for enjoying experimental film, No Nothing Cinema was based on the principle of being free — no admission, no grants, no salaries — which continues today with the all-volunteer-run New Nothing Cinema on 16 Sherman Street. Co-founder Rock Ross allegedly had a T-shirt with the universal “no” sign to indicate that something has to be happening at all times, which became No Nothing symbol. The history of this underground film venue prior to it being forced to relocate in 1997 due to the SF Giants’ stadium construction are the subject of Michael Rudnick’s Dugout on Berry Street (2009, 18 min.).

A couple years ago I attended Hey! A Dean Snider Birthday Celebration, curated by Douglas Katelus for New Nothing Cinema and SF Cinematheque. The venues had teamed up to show a selection of recently preserved Snider prints. I included the late artist’s frenetic Motel L (1981, 16mm, 1.5 min.) in an SFMOMA screening around that time and was eager for a copy of the four-volume DVD set of 16mm and 35mm films spanning 1979 to ’91. On that special evening, a gutted bus transported the group of us from the Dolby Laboratories theater to New Nothing Cinema, where Michael Rudnick worked the grill and V. Vale played piano in the corner.